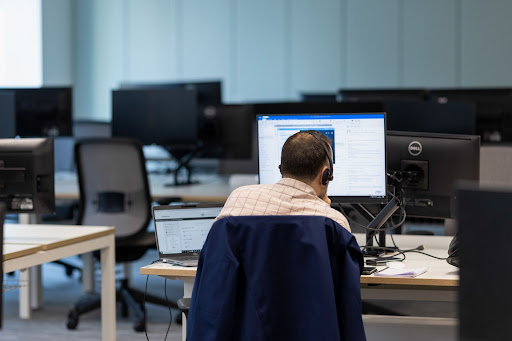 The masks are coming off. Restaurants are filling up. International travel is resuming. But one thing is missing from this picture of returning normality: the rows of office workers bent over their desks. Just over two months ago, I wrote that returning to the office was the great class struggle of our time. I’m happy to report that, so far at least, the workers are winning.

In the US, office occupancy rates seem to have flatlined at about 43% according to Kastle Systems, which collects figures on the number of workers who are working at their desks in America’s ten largest business districts by measuring key swipes. Occupancy rates fell to 42.8% on April 13, having risen to 43.1% on April 6. Across the Atlantic, London’s occupancy peaked at 42% last month.

This is possibly just a wobble, with the long-term trend still upward. But it seems more likely that companies have gathered the low hanging fruit — the people who were raring to return after the anomie of the lockdown — and will henceforth have to deal with much more resistance. Even elite companies that have made a great fuss about getting their employees back to work such as Goldman Sachs and Morgan Stanley are struggling with a resistance army of about 30%. The longer the standoff continues, the more difficult it will be to change people’s habits.

Employers are making more liberal use of carrots and sticks to overcome this resistance. Returning workers are greeted with drinks parties, swag bags, complimentary classes and lots of happy talk about how the office should be fun. Alphabet’s Google treated its staff to a concert by Lizzo. Microsoft throws parties with local musical talent. Qualcomm puts on fitness classes for workers in the office. It’s a wonder that anybody can get any work done.

But there is an air of desperation about this. Do workers really value “free food and swag” so highly that they are willing to endure an expensive commute to eat it? Do we really want to work out in our offices with all our co-workers? And what are we to make of the technology start-up Clions, which has encouraged employees to move their desks to face the cherry blossoms to make work feel more like home?

Hence the sticks. Many companies, including Google, have ordered their workers to turn up for a fixed period of time — most commonly three days a week. Some managers have taken to whispering that there will be a “Zoom ceiling” on workers who stay at home rather than pulling their weight in the office. And the British government has launched a campaign to get stay-at-home civil servants back to the office. Jacob Rees-Mogg, the minister for government efficiency, has compiled a league table of departments by occupancy rates. (The department for education comes at the bottom with 25%. The average across the civil service is 44%.)  Rees-Mogg has taken to leaving faux-polite notes on civil servants’ desks saying “sorry you were out when I visited. I look forward to seeing you in the office very soon.”

Yet bullying is no more likely than bribery to be successful in today’s tight labour market. The only chance that employers have of winning the class struggle and restoring the ancient regime before the pandemic is if they band together to force employees back to the office. But absent such a grand capitalist conspiracy, employees will vote with their feet and clever employers will use flexibility as a recruitment tool. A series of employee surveys point to the same conclusion: Ipsos found that a third of employees would rather resign than return to the office full time;  Korn Ferry found that 64% feared that returning to work would hurt their mental health; two-thirds of Google employees are unhappy about having to return to work three days a week. Employers report that potential new recruits are demanding flexible working as a condition of even thinking about taking a job.

The back-to-the office ultras in the business community have been forced to compromise: JPMorgan CEO Jamie Dimon, for example, said in his latest letter to shareholders that half the bank’s staff will spend some or all of their time working from home in the future. At the same time, reformers who concluded that something fundamental has changed in the world of work are increasingly confident in their analysis. The accountancy and consulting giant Deloitte has cut its office space in London by more than a third as the hybrid model becomes mainstream and some employees choose to work from home full time.

There are many possible reasons why so many people are so reluctant to return to the good old ways: lingering worries about Covid-19; the darkening international situation; the rising cost of fuel; and the growing disorder of American cities, as crime rates soar, homeless camps proliferate and the mentally ill roam the subways. The Kastle figures show much higher occupancy rates in Austin and Dallas, the country’s leaders, than in New York and San Francisco, where commutes are longer and urban disorder worse. A Harris poll for USA Today found that 78% of employees were concerned about being able to afford gas for their commutes.

But so far none of these explanations is completely convincing: In America, restaurant reservations and seat occupancy rates on aeroplanes have reached 90% of their pre-pandemic levels while Britain saw a mass exodus from the country at Easter. The real reason people don’t want to go back to the office full time is that they don’t see the point. Most knowledge workers think that they can do their job just as well from home — and they can point to endless figures that show that they are right. Why endure the hassle of a commute if you can get that report written in the home office?

The clash between workers and employees over returning to work is more than just a struggle over commuting and convenience, though it is certainly that. It is a clash over the meaning of work. The big lesson that workers learnt from Covid-19 is that work is no longer dependent on place. Thanks to widely dispersed computing power, you can do it almost anywhere. The big lesson that employers learnt from Covid-19 is that companies are more than just “nexuses of contracts,” as Michael Jensen and William Meckling put it in 1976. They are social organisations that are in the business of transmitting unique cultures (the word “company” was comprises two Latin words “cum” and “pane,” meaning breaking bread together). When it comes to passing on the tricks of the trade, generating a sense of camaraderie or solving collective problems, there is nothing better than sharing the same space.

Employers are bound to remain frustrated so long as they hanker for a return to the pre-Covid-19 world. Rather than pushing people back into the office first for three days and then for a week, they need to rethink what work means in an age of distributed computer power. They need to recognise that people will no longer go to the office to do things that they can do just as easily at home. So the happy-go-lucky idea that corporate culture will form as a byproduct of people simply turning up is for the birds.

Companies need to think hard about how to use new technology to reinforce social bonds and transmit corporate culture. How about “virtual co-working,” whereby colleagues who work at home either keep Zoom on all the time or collaborate over particular projects? (This author co-wrote a book with John Micklethwait over WhatsApp during lockdown.) Or virtual water coolers whereby colleagues drop in on each other at pre-arranged times? Or virtual coffee meetings whereby an algorithm arranges random meetings between colleagues? (The UK Treasury was using this device before Covid-19 struck.)  Above all, they need to reconceptualise offices as fundamentally social places — not where people go to do their old jobs interspersed with a bit of “fun,” but where they perform irreducibly collective tasks instead of feeding data to smart machines that don’t give a damn what desk they’re sitting on.