Top-ranked players have labelled the decision as 'wrong' and 'unfair', but the All England Club insists that the ban denies President Putin a vicarious victory 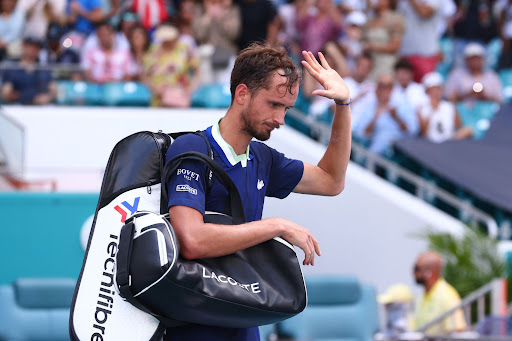 Banning players from Russia and Belarus does more to preserve the tennis tournament as a politics-free zone than support Ukraine’s war effort. Picture: BLOOMBERG

Deploying sanctions against Russian oligarchs and banks was a no-brainer. Now comes the far thornier question about how far to go in cancelling Vladimir Putin’s Russia — not just politically connected elites, but the athletes, artists and other symbolic ambassadors of the regime.

The All England Lawn Tennis and Croquet Club (also known as the All England Club) — the body that runs the historic Wimbledon championship — has decided to ban Russian and Belarusian tennis players from this year’s tournament. Roland Garros, as the French Open is called, has not made a similar determination, which leaves the odd spectacle of Russian players being banned in some places and not others. One look at tennis Twitter and you can see a neatly divided fandom.

The club would like this to be viewed as a principled decision, akin to the apartheid-era bans on SA athletes that served to ostracise the ruling NP. But it risks looking more like a hollow display of off-court gamesmanship, like an orchestra refusing to play Tchaikovsky.

Martina Navratilova, one of the all-time greats of the sport who fled communist Czechoslovakia when she was 18 and is now a US citizen, has condemned the decision as unfair. “I understand the banning of teams, of course, representing countries; but on an individual level, I just think it's wrong.” World number one Novak Djokovic, a six-time Wimbledon winner, has also spoken out against it.

Elina Svitolina, a top-ranked women’s player, who is Ukrainian, has said only Russians who denounce the invasion should be allowed to play. That’s a view UK sports minister Nigel Huddleston was pushing initially, too. But ultimately the All England Club decided that’s too messy to police. Of course, requiring players to make a political statement of that kind would also set a dangerous precedent. And denouncing President Vladimir Putin poses a real risk for players and their families in Russia.

All of this could end up in the courts as the tennis world hashes out a proper protocol. The Association of Tennis Professionals (ATP), which runs the men’s tour, is opposed to the move and has warned that its rules don’t allow tournament hosts to discriminate against players based on anything other than their ranking. The club’s ban may also be challenged on the grounds it violates UK human rights law, which includes nationality as a protected characteristic. Of course, Wimbledon is a well-lawyered private members’ club that will have prepared its defence against those charges.

The point of sanctions

Clearly, the invasion of Ukraine is so brazen and consequential that there are few realms of modern life where these questions don’t arise. As with all sanctions and cancellations, the question must be, to what end? Forget deterrence, obviously. Putin is not going to change his military plan on the off chance that a Center Court audience can see world number two Daniil Medvedev (who has never made it past the fourth round there) square off against Djokovic.

There is, of course, the argument that it would be unfair to Ukrainian players to have to compete against Russian players given what their country is suffering. And yet, that can happen at other tournaments. And where to draw those lines is a road to endless “whataboutery.” (Israel has been on the receiving end of a lot of that over the years.)

A somewhat better argument in favour of the ban — and the one implied in the club’s statement — is that it denies Putin a vicarious victory. In theory, sport and politics should be separate spheres. In reality, because humans identify so strongly with sporting competition and achievement, they have always been intertwined.

French President Emmanuel Macron sat in the VIP box with Putin to celebrate France’s 2018 FIFA World Cup victory. Boris Johnson’s career got a major boost as London mayor when he presided over the 2012 Olympics. And he was quick to hitch his wagon to the Emma Raducanu fairytale when the British player won the US Open last year.

But, let’s face it, no political leader has elided sporting prowess and national greatness more overtly than Putin, a judo black belt whose own shirtless images are carefully crafted to push his narrative of past and future Russian greatness. Putin has invested heavily in sports, hosting numerous major events, such as the lavishly financed 2018 FIFA World Cup and the 2014 Sochi Winter Olympics, whose official media guides noted that “the sleeping giant of Russia is awakened, ready for change and growth”.

Wimbledon wants none of that. Even the remote prospect of Putin beaming with pride from the Kremlin as the Duchess of Cambridge congratulates Medvedev on his victory, on Wimbledon’s centenary no less, is a PR nightmare for the venerable club.

And yet, the Kremlin has already used the decision to reinforce its narrative that Nato and the West discriminate unfairly against Russians. Banning Russian players, therefore, has the perverse affect of helping Putin push his message of Russia alone against a hostile world, but only because the Kremlin twists everything to match its message.

The ban also (quite deliberately) reduces the chances of war-related headlines around the tournament. But who does that serve? It’s also a ban on the powerful symbolism of a Russian-Ukrainian doubles act, or the prospect of Russian or Belarusian players using the global platform they’d have at the event to send a message to Putin or fellow Russians and Belarusians at home to oppose the war.

While it’s hardly the job of the tournament to facilitate such things, it’s not quite right to say the ban is wholly about denying Putin satisfaction since it also reduces his risk that he will be called out by Russian players on a global stage.

A question of fairness

Navratilova has a point in drawing a distinction between team and individual sports and questioning the fairness of the measure. National teams play under a flag; and sports with state-led development programmes that select and groom players from a very young age, as is the case with gymnastics or figure skating, are also flag-bearers even where they feature individual competitors.

But apart from the Davis and Billie Jean King (formerly known as the Fed) cups national team competitions, tennis is a fiercely individual sport where nationality plays a very limited role. In apartheid-era SA, many sports faced bans and boycotts, but its tennis players were largely free to compete around the world. Johan Kriek won the Australian Open in 1981 and 1982, and Kevin Curren made it to the Wimbledon final in 1985. Both men took US citizenship, which enabled them to avoid the apartheid bans.

Citizenship doesn’t necessarily overlap neatly with national identity in tennis, partly because great players need to be around clusters of other great players when they are developing. Russians are ubiquitous at Spanish and US tennis academies. The retired star Maria Sharapova moved to the US when she was seven, but represented Russia in the 2012 Olympics. Similarly, many Russians cheer German-born Alexander Zverev as one of their own, because his parents were both Soviet-era Russian tennis players.

Or take Andrey Rublev, another top-10 ranked men’s player who was born in Russia but who also honed his game in Spain. His mother coached at the famous Spartak Tennis Club that has produced so many strong Russian players and was awarded the Medal of the Order for “Merit to the Fatherland” in 2009. Rublev was the first Russian player to speak out against the war, writing “No war please” in marker on the camera lens after his semifinal win at Dubai. He made a statement, too, in pairing with Ukrainian Denys Molchanov to win the doubles title.

To mention these individual cases is of course to highlight Wimbledon’s dilemma. Either the club makes individual decisions based on the circumstances of the player (much the way banks conduct know-your-customer due diligence for compliance purposes), or it enacts a blanket ban on any player with a Russian passport. That’s the route favoured by retired Ukrainian player Alexandr Dolgopolov, who says all Russians should be held accountable in some way.

An arguably bigger hit to Putin, a huge hockey fan, would be the expulsion of the 55 Russian players active in the National Hockey League (NHL), as legendary Czech goaltender Dominik Hasek has advocated. But while the NHL has suspended its ties with Russian businesses and its Russian-language social media accounts, it hasn’t gone that far. As with the All England Club, these decisions tend to be foremost about commercial and narrow reputational risk management.

Two years ago, Wimbledon had reason to feel smug during a time of maximum uncertainty. It had taken out pandemic insurance and so was indemnified against an event that took pretty much every other organisation by surprise. The decision to ban Russian and Belarusian players from this year’s championship is another insurance policy of sorts. But while it will ensure the drama stays on court, it’s an unsatisfying answer to the question of how far to punish ordinary (and even extraordinary) Russians for Putin’s crimes.

1.
Google not final judge about whether computers ...
Opinion
2.
ANDY MUKHERJEE: Banking could meet the same fate ...
Opinion
3.
GARY SHILLING: Treasury yields are peaking — and ...
Opinion
4.
The man with an eye for business
Opinion
5.
Brewers vie for Africa’s beer market amid labour ...
Opinion

1.
Google not final judge about whether computers ...
Opinion
2.
ANDY MUKHERJEE: Banking could meet the same fate ...
Opinion
3.
GARY SHILLING: Treasury yields are peaking — and ...
Opinion
4.
The man with an eye for business
Opinion
5.
Brewers vie for Africa’s beer market amid labour ...
Opinion