Under the far-right, populist leader of the National Rally, the European country will be embroiled in permanent conflict 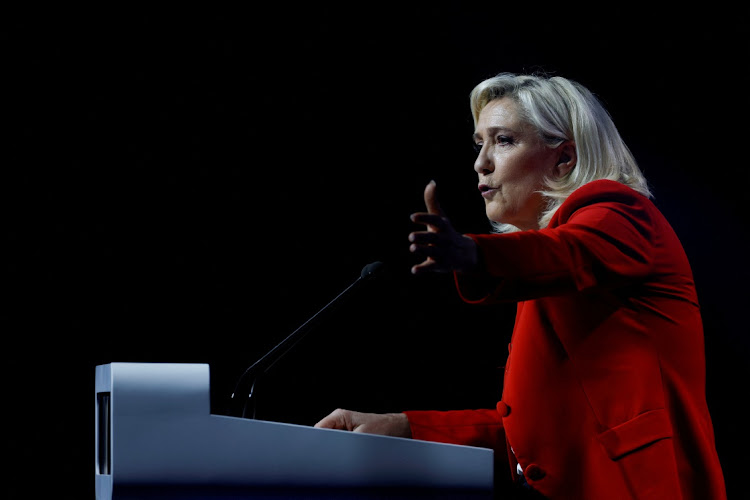 When Emmanuel Macron last faced off against far-right foe Marine Le Pen for the French presidency in 2017, her call to follow the UK out of the EU was in tune with the populist times. Yet it failed to win over voters worried about the chaos that would ensue.

A French “Brexit” is off the menu this time, which has made Le Pen seem more palatable. But what she’s proposing in its place is an EU hollowed out from the inside by France following in the footsteps of Hungary’s Viktor Orban, tearing up German co-operation and breaking unity on Russia. As she and Macron debate ahead of Sunday’s vote, the risks are less extreme than before, but the West still has reason to watch — and worry.

In Le Pen’s worldview, Europe serves two purposes: It’s a symbolic punching bag to differentiate herself from “globalist” Macron — hence the cheap talk of pulling down EU flags from government buildings. It also offers a vital outlet for cost-cutting. Her post-victory pledge is to reduce France’s net contribution to the EU budget, ideally by about €5bn ($5.4bn). Those funds could then go towards extravagant spending plans at home.

The reality is that reopening the 2021-2027 budget that’s already been agreed to will find few takers. Rather than a Margaret Thatcher-style leader, pounding her fist on the table to demand France’s money back, Le Pen would likely isolate France and embroil it in permanent conflict. With the presidential hopeful also keen to take on EU rule of law, give preferential treatment to French goods and restore national border controls, France would become the poster child for “less Europe” — one always threatening “no Europe” if Le Pen doesn’t get her way.

As for Le Pen’s ambition to build an alliance of like-minded nations to reclaim powers from Brussels, who among the EU’s other 26 members would succumb to her arm-twisting charms? Certainly not the southern member states. Orban, a target of Brussels’ rule-of-law enforcement, would surely appreciate an outspoken supporter of his illiberal style at Europe’s top table. But even he might not appreciate the prospect of a €5bn hole in the accounts, or of Paris tilting the single market’s playing field in its favour.

To be sure, a Le Pen victory is currently the less-likely outcome. Citigroup Inc. strategists put her chances of winning both the presidency and a parliamentary majority at 10% — and financial-market calm reflects that.

Yet the race is narrower than it was in 2017. French public opinion is deeply ambivalent about future EU integration, even if there’s little desire to leave. The risk of a closet “Frexit,” whereby the laws that underpin the single market come undone in its second-biggest economy, should not be overlooked. Nor should the possibility of institutional gridlock. That any of this would take place at a time of war on Europe’s doorstep, when the region’s energy ties are being reshaped, is particularly bleak.

One can imagine Vladimir Putin enjoying every minute if the Elysee goes to Le Pen, whose party is reportedly still paying back a loan from a Russian company, has called for wind farms to be halted and has criticised tougher sanctions against Russia. Not to mention Le Pen’s stated desire to leave Nato’s integrated command and renegotiate US ties, weakening the transatlantic bond Putin so despises.

a 'France First' fight inside the EU would be a slow-motion car crash.

In this scenario, France would continue to have strategic weight as a permanent member of the UN Security Council (UNSC) and the EU’s only nuclear power — but it would direct this influence towards new alliances, tearing up co-operation with Germany in favour of a strategic partnership with Russia and an attempted reset with Brexit Britain. Given the UK is focused on deepening transatlantic ties, success is hard to imagine.

Le Pen’s rhetoric clearly aspires to the grandeur of De Gaulle during the Cold War. But the general would be spinning in his grave to see France dump its closest continental ally and strategic anchor.

Nigel Farage, the original cheerleader of Brexit, says a Le Pen win would be Brussels’ “worst nightmare.” He’s not wrong. Unlike the UK, whose drawn-out departure came with a cut-off date and an incentive for Europe to pull together, a “France First” fight inside the EU would be a slow-motion car crash.

The spirit of Frexit is alive and well. Macron has little time left to counter it.

Le Pen pivoted her presidential campaign from her usual anti-immigration, Eurosceptic message to how she would help restore families’ budgets
World
3 months ago

Macron and Le Pen eye 7.7-million people who backed Jean-Luc Melenchon, who finished third in the first round of tight French election
News
3 months ago