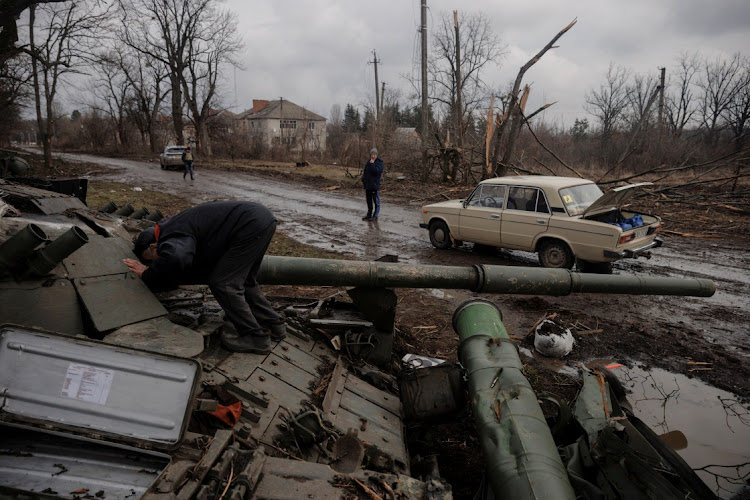 A local man looks into a Russian tank left behind after Ukrainian forces expelled Russian soldiers from the town of Trostyanets which they had occupied at the beginning of its war with Ukraine, March 30 2022. Picture: REUTERS/THOMAS PETER

Globalisation felt as if it was going into reverse long before Russian tanks rolled into Ukraine. Donald Trump’s election, Brexit and Covid-19 were all flagged as milestones on the path back towards more protectionism and higher costs for multinationals.

Yet the speed and severity of the slide into war and its fallout have shocked Europe’s political and corporate establishment. Strategic plans and long-term investments are being torn up, leaving behind factories and staff. Carmaker Renault SA has halted Russian operations, as has brewer Carlsberg AS. At about 10% of revenue in both cases, this is a lesson that will not be quickly forgotten.

The rethinking of business ties has already happened in Russia

And while the focus is on Russia, boardroom angst is also stretching to that other emerging-market El Dorado — China — as its ties to Moscow are scrutinised. With relations between Beijing and Brussels already in deep freeze, and a China-European Union summit over a stalled investment agreement on Friday unlikely to improve matters, preparing for a post-war economy increasingly means taking on a Cold War view of the world.

Corporate pressures related to the geopolitics of China have always been about “targeted” decoupling rather than anything more radical — understandable, considering China is the world’s second-largest economy and is among the EU’s top trade partners — but hopes of a thaw are fading. “The rethinking of business ties has already happened in Russia, and I expect it to happen in China,” says Noah Barkin, of research firm Rhodium Group.

While Europe has in the past been deeply split over how to deal with China expanding investments in Eastern and Southern Europe, it is likely to put up an increasingly united political front. Germany is reiterating the European view of China as a “systemic rival”: Beijing’s support for Russia and warnings to the West on Taiwan are adding to long-running grievances over its geopolitical influence and acquisitions inside the EU.

And just as Russia has found it harder to split the West, Beijing has pushed Europe closer together through its boycott of Lithuania after Taiwan opened a representative office in Vilnius. With China eager to keep the door of European trade open, Friday’s summit will be a test of the EU’s ability to wield its political cohesion and economic heft, says Philippe Le Corre, at the Carnegie Endowment for International Peace.

Firms are still keen to highlight China as a strategic market, but some behaviour is shifting. Volkswagen AG, which makes nearly 40% of annual sales in China and as recently as Christmas was calling for more China-EU co-operation, is rethinking its supply chain with “resilience” in mind. Executives talk of reducing business reliance on China by expanding investments in the US and duplicating Ukraine production in countries such as Poland and Romania, the WSJ reported this week.

No such thing as a free lunch

Beyond war, Covid-19 is an obvious catalyst as Shanghai slides into lockdown and forces the likes of Volkswagen to halt some production. But Ukraine has accelerated things, driving a stake through old ways of doing business. Russia is the visible tip of the iceberg of vulnerable profits in authoritarian nations. European firms that began their investments over swigs of vodka with Vladimir Putin, imagining new markets brought in from the cold through trade, today lack components and customers.

Few firms would give up plants and profits willingly, let alone at such speed. Executives who took pride in a global workforce now recount tales of internal staff political divides from Russia and Ukraine to China. Sticking to the explicit contours of international sanctions or contract law hasn’t pacified tensions or boycott calls. After a rocket strike destroyed one of French home-improvement chain Leroy Merlin’s stores in Kyiv, Ukrainian staff called on the firm to stop sales in Russia (it hasn’t). The world map of corporate conquest now looks like a game of Risk.

Executives are being taught to prepare for extreme scenarios, such as a halt to globalisation that’s more abrupt than feared. If it comes to pass, the new order could result in two blocs that trade more internally than with each other. The upside for Europe might be a more integrated union, and less dependence on cheap gas. Robust and resilient supply chains would be a strategic advantage. Ties with the US would be deepened.

But there is no such thing as a free lunch. Re-shoring jobs, running alternative supply chains and quitting cheap sources of power bring costs, which are already being seen in sky-high European inflation. Telling companies and consumers to cut back doesn’t just mean adding an extra sweater, but also reducing investment.

These are choices Europe hoped it wouldn’t have to ever make, given its own ambitions for a seat at the superpower table. Businesses are preparing for the worst, however — just in case.

More stories as if this are available on bloomberg.com/opinion
Bloomberg

Risk-averse investors could switch to Western European property, which bodes well for Lighthouse shares
Money & Investing
4 months ago
Next Article