ANDREAS KLUTH: Thanks to Putin, delusions of German exceptionalism have died

Germans are finally admitting the obvious: threats exist; enemies are real and some can only be stopped with force; armies are needed and talking is good but only if you are strong 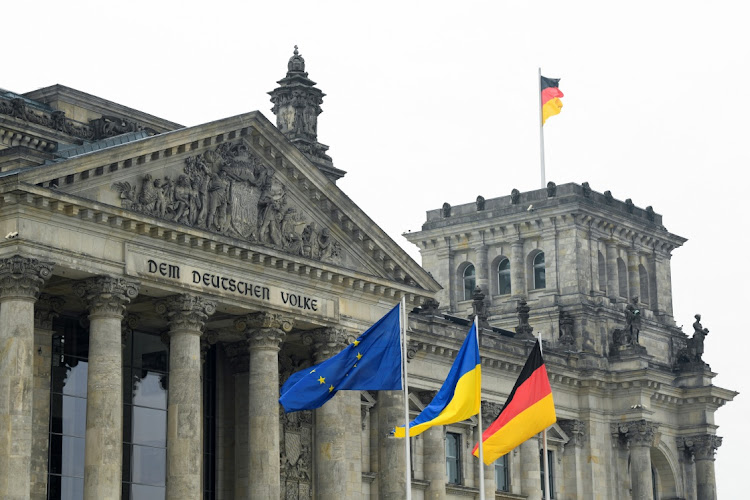 The EU, Ukraine and Germany's flags wave outside the Reichstag building in Berlin, Germany, on March 17 2022. Picture: REUTERS/ANNEGRET HILSE

As a young KGB officer stationed in Dresden, Vladimir Putin became fluent in German and went on to fancy himself quite the expert on his host culture. How ironic that decades later his actions have led to a turning point in German history that he won’t like, but the world should welcome.

When Putin launched his unprovoked war of aggression against Ukraine in March, one side effect was an about-turn not only in Germany’s foreign and defence policy but in its collective worldview. I called it a German Revolution.

In a sense, though, this revolution was more of an abrupt historical jerk towards what other countries would consider normality. It may turn out to be the beginning of the end of two centuries of Sonderwege, or “special paths” in German history. Mostly, these paths have turned out to be dead ends — for Germany, Europe and the world. The demise of German exceptionalism is, therefore, a good thing.

The word Sonderweg first cropped up among German historians in the 19th century, who used it with positive connotations. Germany was late to become a nation state, and did so only after a failed attempt at liberal revolution in 1848 that kept it from catching up with the trend towards democracy in other Western countries, such as France or the UK

Nor, however, was the newly unified Germany an “Eastern” autocracy like Tsarist Russia. Instead, the theory went, Germany was destined to be special — neither Western nor Eastern but unique. That meant more heroic, deeper, more soulful, less about French-style “civilisation” and more about Romantic German “culture.” Like other countries’ notions about being exceptional, all of this was bilge.

After World War 2 and the Third Reich, however, the term was rediscovered by foreign as well as German historians. They were all trying to explain how German history could have gone so horribly wrong. The special-path theory was tempting because it suggested that, owing to some German aberration, the country had somehow been destined all along to become totalitarian.

Officially, this whole business about a Sonderweg ended when the Berlin Wall fell in 1989 and Germany reunified. Here at last — two centuries to the year after the French Revolution — was the long overdue German version, achieving both national unity and liberty. Unlike most revolutions, it was even peaceful.

But by then Germany had already embarked on lots of new Sonderwege. At least that’s what pundits kept calling them, perhaps because the word — like angst, zeitgeist, Schadenfreude and other Teutonic concoctions — is just too perfect.

It started in postwar West Germany as it was building a new identity based on atonement. Warmongering was taboo. Pacifism — or at least antimilitarism — was de rigueur. When US soldiers board a domestic flight, they get a shout-out from the pilot and an ovation in the cabin. Soldiers in the Bundeswehr were apt to get spat at on the streets.

Being unmartial and outwardly meek became the new national identity. BMWs replaced tanks. Nationalism was out, post-heroic and cosmopolitan pan-Europeanism was in. Power was uncool as such. Rules and laws were the alleged future of international relations.

With these attitudes came a new approach towards the Warsaw Pact and the Soviet Union. During the war, Germans had turned that region into bloodlands. During the Cold War, they nominally confronted it alongside the US and Nato. But the first Social Democratic chancellor, Willy Brandt, had different ideas.

These became known as Ostpolitik (Eastern Policy). Mostly, this meant rapprochement — talking nicely to the Kremlin, no matter how it replied. Let the Americans emphasise deterrence, the thinking in Bonn went; we Germans will bring Russia “change through trade” — Wandel durch Handel, as the catchy rhyme goes.

Much of the German left went further and combined antimilitarism and Russophilia into a demand for disarmament — but the unilateral kind. Germans took to the streets against the stationing of US nuclear weapons on their territory. The Soviet, and later Russian, warheads pointing at them didn’t seem to bother them as much.

In the reunited country after the Cold War, this mentality became a new, and uniquely German, ideology. For the first time in history, as then-Chancellor Helmut Kohl put it often, “Germany is surrounded only by friends and partners.” Many Germans projected this onto the continent and even the world. Some German authors pondered the fate of “Democracy without Enemies.”

And so Germans began a decades-long demilitarisation. Army budgets were cut, conscription was ended. Yet again, Germans felt special and — not so implicitly — superior. Others might not be so enlightened yet — particularly Americans like George W Bush on Iraq and Donald Trump on just about everything. But eventually they’d all come around to German-style post-modernity.

Few Germans noticed how arrogant they appeared to allies and others, how tin-eared and insensitive. Poles, Latvians, Estonians, Lithuanians and others — all of them former victims of both Germany and Russia — were often agape at the self-delusion in Berlin.

The second Social Democratic chancellor, Gerhard Schroeder, arranged a gas pipeline, called Nord Stream, to be built from Russia under the Baltic Sea to Germany, circumventing Ukraine, Poland and the rest of Eastern Europe. Soon after he left office, he became its chairman and lobbyist.

You’re making yourself dependent on Putin’s gas, the allies warned Germany. Oh, it’s just a business deal, the Germans replied; and anyway, Putin isn’t dangerous, because we talk to him so much. Another chancellor, Angela Merkel, added a second pipeline, Nord Stream 2, right next to the first. For good measure, she also exited nuclear power generation, making the country even more dependent on fossil fuels from Russia.

These Sonderwege, like those of the 19th and 20th centuries, were really symptoms of a profound provincialism in German politics and society. Few politicians or voters knew how other countries saw the world. Those who did, didn’t care.

Thanks to Putin, all of these delusions are now gone. Like others, Germans are finally admitting the obvious. Threats exist. Enemies are real, and some can only be stopped with force or deterrence. Energy independence is a legitimate goal of geopolitics. Alliances must be honoured with more than lip service. Armies are necessary. Talking is good, but only if you’re strong.

Day by day, the old taboos of Germany’s Sonderweg are dropping. Chancellor Olaf Scholz, a Social Democrat like Brandt and Schroeder, is throwing €100bn at the Bundeswehr. Germany will buy US-made F-35s and other jets to replace older planes capable of dropping the roughly 20 US nuclear warheads stationed in Germany. Nord Stream 2 is suspended, and will never pump gas. The debate is instead about how fast Germany should wean itself from all Russian fossil fuels.

It took the worst European war of aggression since Hitler’s to turn Germany’s political culture from messianic naivete to common sense. But sometimes it takes centuries to get off a Sonderweg. Putin may yet wreck the continent. But in this one way, he’s changed German history for the better.

1.
How Warren Buffett made Occidental into the kind ...
Opinion
2.
BIG READ: The Chinese Century is here? That’s ...
Opinion
3.
GARY SHILLING: Google searches for ‘recession’ ...
Opinion
4.
AARON BROWN: There are big differences between ...
Opinion
5.
US had plywood dedication to Afghanistan war, ...
Opinion

JONNY STEINBERG: Will fate propel Zelensky to greatness as it did Mandela?

1.
How Warren Buffett made Occidental into the kind ...
Opinion
2.
BIG READ: The Chinese Century is here? That’s ...
Opinion
3.
GARY SHILLING: Google searches for ‘recession’ ...
Opinion
4.
AARON BROWN: There are big differences between ...
Opinion
5.
US had plywood dedication to Afghanistan war, ...
Opinion

JONNY STEINBERG: Will fate propel Zelensky to greatness as it did Mandela?