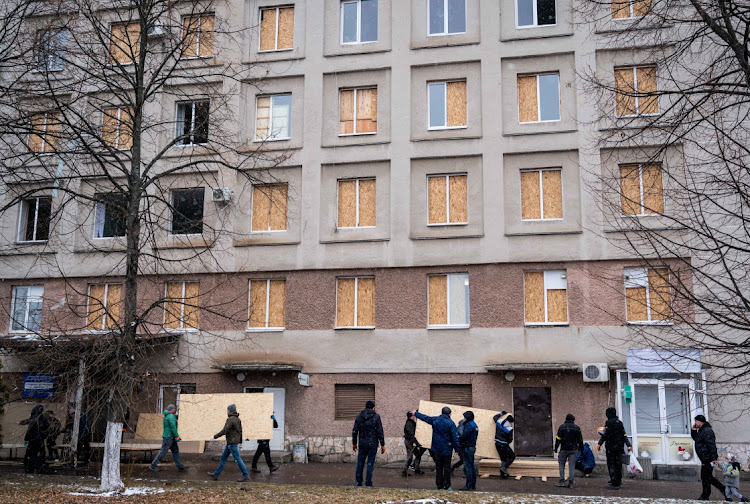 Men use sheets of plywood to cover windows of a hospital following shelling, as Russia's invasion of Ukraine continued, in Zhytomyr, Ukraine, in this March 2 2022 file photo. Picture: REUTERS/VIACHESLAV RATYNSKYI

Amid the sounds of air raid sirens, Mariia Shostak lay in intensive care. Wearing a disposable shirt and no shoes, she was wheeled down to a basement shelter and saw her newborn son, Arthur, for the first time. Shostak’s was the first recorded war birth, a Caesarean section on February 25, according to an account posted by the UN’s sexual and reproductive health agency (UNFPA). She was one of the lucky ones.

With the bombing on Wednesday of a maternity and children’s ward at a hospital in Mariupol, Ukraine is an atrocious reminder of the danger facing some of the country’s most vulnerable. The bombing came during a supposed pause in fighting to allow for the evacuation of people from the besieged city. “What kind of country is this, the Russian Federation, that fears hospitals, fears maternity hospitals and destroys them? What was it — deNazification of the hospital?” Ukrainian President Volodymyr Zelensky asked.

Ukrainian authorities say three were killed, including one child. In a press conference in Turkey, Russia’s foreign minister Sergei Lavrov denied Russia was hitting any civilian targets and suggested the hospital had been cleared out and was being used as a military outpost.

Nobody outside Russia is buying that line. The bombing has strengthened calls for a limited no-fly zone to support a humanitarian corridor and underscores the urgency of getting help to pregnant women and babies in a country where life is under attack.

This war will leave countless scars. A generation of children caught up in this conflict will be profoundly shaped by it. But we know from research on conflict zones that there are severe immediate and longer-term risks for mothers and their newborns. Establishing humanitarian corridors for those who can travel, and protecting those who cannot, is critical. Women do not stop giving birth because bombs are dropping.

More than 4,300 babies have been born since Russia invaded Ukraine, and an estimated 80,000 births are expected in the next three months, many of them without access to critical maternal care. “For some, childbirth will be a life-threatening rather than a life-changing experience,” says the UNFPA. The UN Refugee Agency is also expecting 1,000 live births per week in neighbouring countries from Ukraine’s refugee population.

This war will leave countless scars. A generation of children caught up in this conflict will be profoundly shaped by it.

Those giving birth in areas under siege are in makeshift shelters and hospitals treating shrapnel wounds, Covid-19 and other emergencies. Medical staff say the stress from the war has sent many pregnant women into early labour, adding complications. Some struggle to get to hospitals at all since many roads are damaged or perilous. And there will be complications as some newborns need medical care that might not be available. New mothers struggling to find adequate nutrition for themselves may not be able to nourish their newborns.

Studies of conflicts, particularly in Africa but also in the war in former Yugoslavia, have shown the devastating effects on maternal mortality and health during periods of even low-grade strife. Prenatal stress can hamper development. Low birth weight is more common, as are miscarriages, stillbirths and congenital abnormalities. For those mothers and babies who survive, the toxic stress of starting life in a war zone can lead to long-lasting emotional scars and slow cognitive development.

Ukraine has more advanced medical facilities and trained medical staff than many of the countries studied, but as we saw from the attack on Thursday, that capability can quickly be degraded. Many recent medical graduates and other medical staff may be part of the 1.7-million Ukrainians who have fled to neighbouring countries.

Even before the war, there were risks to women in Ukraine. Gender-based violence was a serious problem in eastern Ukraine, where conflict has raged for eight years. According to a 2019 study, about 75% of Ukrainian women reported experiencing some kind of violence from the age of 15, with one in three experiencing sexual violence. Those risks only increase amid conflict and the hazards of displacement, and pregnant women may be more vulnerable.

Maternal survival is closely linked to child survival. Babies who lose their mothers are at increased risk of death through infection or malnutrition. Humanitarian relief must include mobile clinics for maternal and neonatal care, oxygen, sterile delivery kits for pregnant women and other supplies. While a no-fly zone has been ruled out for good reason, we may come to a point where a more limited version to secure a humanitarian corridor becomes unavoidable. The situation in Mariupol should show that existing aid is not enough.

The Mariupol bombing will no doubt be the subject of a war crimes investigation. In the meantime, new life still tries to emerge from the bleakest of places. With support, perhaps it can survive.

The only countries able to get through to Moscow, oppose the invasion and sent arms or aid to Ukraine
Opinion
5 months ago
Next Article

ANN CROTTY: Sitting on the fence over Russia might turn out to be the best ...

ANN CROTTY: Sitting on the fence over Russia might turn out to be the best ...