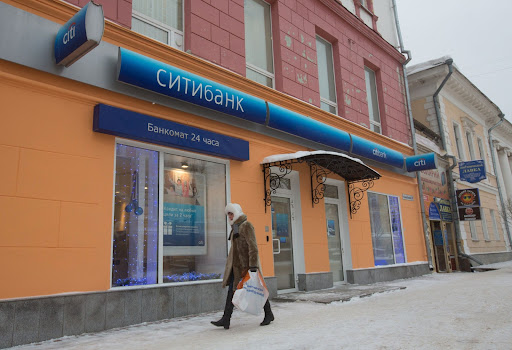 Banking is an asymmetric business; you make modest amounts of money most of the time and occasionally suffer extraordinary losses. A small fraction of your assets going bad can trash a material percentage of your earnings.

This is the reality many banks face as they size up their exposure to Russia. European bank stocks, in particular, have suffered steep declines since the invasion in Ukraine began, and the cost of insuring their debt has risen.

US and European banks are exposed in four ways. Several still operate on the ground in Russia. It was a profitable market once and allied to their global ambitions. Many reversed course in the aftermath of the financial crisis as they reined in their global aspirations. Barclays and HSBC exited Russian retail banking a decade ago. But others are still there, among them Unicredit, Societe Generale, Raiffeisen Bank International and Citigroup.

These banks function in Russia just like their local counterparts, raising deposits in roubles and making loans in roubles. They are not subject to sanctions (which may give them a temporary competitive edge), but they are subject to the capital controls Russian authorities have put up in response, preventing them from repatriating earnings.

Blocked from pulling out their capital, management is stuck. The increase in interest rates in Russia to 20% from 9.5% will squeeze bank margins and prompt higher credit delinquencies, leading to what could be heavy losses. Foreign banks will have to decide whether to throw good money after bad  — recapitalising them — or abandon them and write off the capital they have invested.

And that is if the decision isn’t made for them: Russian authorities could seize the banks. Citigroup has been there before. In January 1917, it opened a branch in St Petersburg (then known as Petrograd); within a year it had been expropriated by the Bolsheviks. “Value of this asset is extremely doubtful and should be charged off,” federal examiners recorded in 1920.

Raiffeisen has the greatest exposure to this scenario. It acquired local lender Impexbank in 2006 (“a decisive step towards continuing our successful track record in Russia”) and became a top 10 Russian bank, with €2.4bn invested there. On an investor call last week, management reiterated its commitment to staying in Russia but laid out the worse-case scenario to earnings if it were forced to walk away.

The second level of exposure comes via cross-border lending. Foreign banks had been reducing their loans to Russia since the Crimea invasion in 2014. At end-September 2021, foreign banks had lent $121bn into Russia, down from $269bn in 2013. The trouble is that sanctions redefine what “exposure” actually means.

Dutch bank ING Groep last week revised up its Russian exposure to €6.7bn from €4.7bn, after adding new elements such as “non-Russian borrowers with Russian ownership”, reflecting Western sanctions. Citigroup raised its disclosed exposure to $9.8bn from $5.5bn, adding at-risk items such as cash held at the Central Bank of Russia.

Again, banks have seen it before. In 1998, they suffered losses equivalent to about 60% of their non-sovereign loan exposure when Russia devalued its currency and defaulted on its domestic debt. Back then, Credit Suisse was hit especially hard and took writedowns and provisions of Sf1.86-billion, including marking its government securities at 10c on the dollar at the time.

While these exposures are very small relative to the size of the banks’ balance sheets — less than 1% in the cases of Citi and ING — the effect on earnings can be significant. In Citi’s case, writing off 60% of its exposure would knock pretax profits by nearly a third. Contrast that with less capital-intensive financial businesses such as Visa and Mastercard; they have disclosed that 4% of net revenue is attributable to Russia, which is a much more contained exposure.

A third risk banks face is as enforcers of sanctions. It is their responsibility to ensure sanctions are complied with, and the penalties for facilitating breaches can be severe. In 2015, BNP Paribas SA was fined $8.9bn for sanctions violations, the largest financial penalty yet imposed in the US in a criminal case. Managing operational risks like these is as important — and potentially as costly — as managing a balance sheet. One reason sanctions have broadened beyond the parameters set by policymakers is that banks have been trained to be cautious of breaching them, even inadvertently.

There are also the indirect effects, as with any macro shock. Research suggests that geopolitical risk reduces bank stability. One popular measure of geopolitical risk puts the current climate back at levels not seen since the second Iraq war. The knock-on effect on trading activity, corporate confidence and other drivers of banks’ core business is unknown.

Against these risks, banks have very high levels of liquidity and better solvency than they have had going into any crisis in decades. The 2008 playbook is a popular one to pull out at times of stress, but bank balance sheets are much stronger than they were then. Short-term, banks will suffer the collateral damage of financial warfare; in the longer term they will be fine, albeit perhaps with less appetite than before to venture back into Russia.

IAN BREMMER: Would a 21st-century Cold War be more or less dangerous?

Putin has shown no willingness to back down, but millions of Ukrainians will continue the fight, even if Russian soldiers seize their entire territory
Opinion
2 months ago

You can talk war in Ukraine with Armscor’s Phillip Dexter, just don’t marry him
Opinion
2 months ago
Next Article