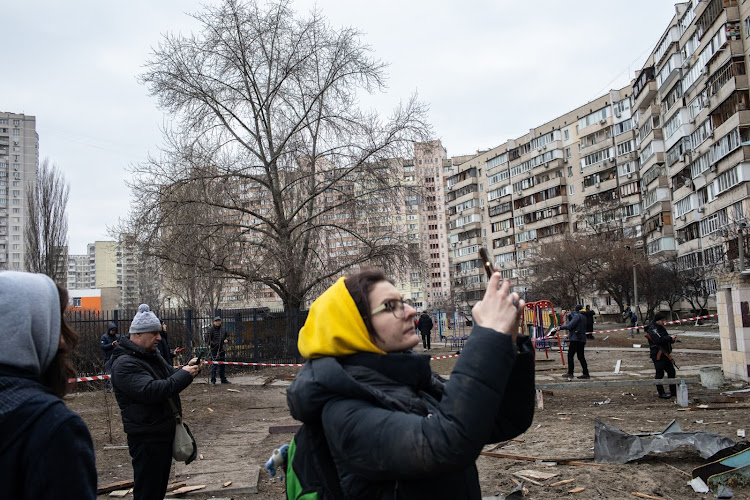 Wrecked buildings, tank columns, explosions, armed volunteers — pick a topic, and even the cable news stations are likely to be sharing many amateur videos illustrating it. Picture: BLOOMBERG/ERIN TRIEB

Russia’s war for Ukraine’s territory is being waged with tanks and artillery, but the battle for the world’s hearts and minds is being fought largely on social media — and there, at least, Vladimir Putin is losing.

Cellphone videos of desperate Ukrainians huddled in subways have a power difficult to convey in words. Images captured by citizens have helped spark concern about Russia’s possible use of (illegal) cluster munitions. And Ukrainian President Volodymyr Zelensky has used social media to assure the country that he is still in office and still fighting.

During the Civil War and World War 1, the only way to get news from the front was to grab the latest edition of the local paper, which was likely to publish huge headlines over skimpy wire reports. In World War 2, people listened for radio bulletins, and Edward R Murrow of CBS became one of the world’s most famous journalists. By the Vietnam era, we waited for the latest details on the evening news. To keep up with the 1991 Gulf War and the invasions of Afghanistan and Iraq just more than a decade later, we turned on cable news any time we wanted.

The citizen journalists are making the struggle, in the words of one veteran, ‘the most documented war in human history ’

Through all those changes, there was one constant: information was delivered, for better or worse, by reporters employed by professional news organisations.

That has all changed.

Citizens caught up in Russia’s invasion of their country have become, with their cellphone cameras, what the law professor and blogger Glenn Reynolds, much earlier in the internet age, memorably labelled “An Army of Davids”: individual auteurs whose ability to document in real time the effects of Putin’s grand strategy might be the most effective weapon in uniting the West against him.

It is difficult to overrate the difference this evolution makes. As someone once wrote, modern warfare has increasingly separated ordinary people from what is happening on the battlefield.

But that is all over. Social media posts from Ukraine represent the apotheosis of the trend towards bringing the battlefield to us. The citizen journalists are making the struggle, in the words of one veteran, “the most documented war in human history”.

Nowadays, almost half of US adults get their news from social media. Moreover, recent years have seen a sharp rise in consumption of user-generated videos, especially among the younger generation. And social media users are more likely to engage with content that doesn’t include a lot of text and does include splashy and colourful images.

True, there are risks to watching the war unfold online. For one thing, social media users are often less engaged than those who turn to legacy sources for news. But maybe that’s old news. This is not the first war to be broadcast on social media, even if feels like it to some.

For another, not all the videos are reliable. Given that TikTok videos with the hashtag #RussiaUkraine have already been viewed more than 130-million times, we should hardly be surprised by the existence of a large number of fakes, including some that recycle audio from older TikTok posts.

But video has its virtues, and we’re seeing them here. Foremost among them: the evidence that when we learn of a terrible event that happens to a group of which we aren’t a member, we’re more likely to be moved to anger and activism after viewing video of the event than after reading about what happened. Thus we see the link from the outrage around the world over George Floyd’s murder in May 2020 to the worldwide outrage over Putin’s murderous invasion about 21 months later: once we have seen the video, it’s harder to turn the page.

During the Vietnam War, those on the pro-escalation side often insisted that had World War 2 been televised, the GI’s would have been brought home from Europe long before the job was done. I thought the argument false then and I think it false now. What will be interesting in the next weeks is whether the social media images that have so outraged the West will cause similar outrage among Russian citizens, and thus possibly, just possibly, put an end to what military historian John Keegan called the “poisonous intoxication” of wartime fervour.

Even before the invasion, Putin was rushing to establish control over the operation of social media outlets within Russia’s borders. No doubt he has the same intentions for a conquered Ukraine. Let’s all hope that whatever barriers the regime might construct, Ukraine’s army of Davids will find a way through.

KATE THOMPSON DAVY: Today’s war is a tech war, showing how digital the world has become

TOBY SHAPSHAK: Facebook’s end is nigh

After losing $252bn in a day, Facebook’s reckoning is here — both from lawmakers and Wall Street
Opinion
3 months ago
Next Article

MICHAEL FRIDJHON: SA chenins are enjoying their place in the sun

MICHAEL FRIDJHON: SA chenins are enjoying their place in the sun