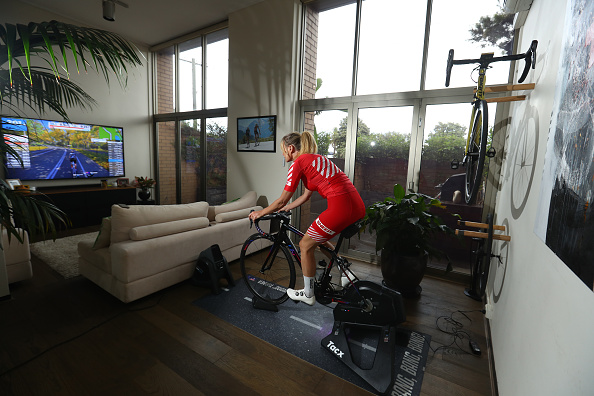 At any given moment, dozens of cyclists are doing laps of Central Park, getting cheered on through the streets of London or sweating the climbs of Watopia. And they’re doing so at home in virtual reality.

As Peloton Interactive slashes staff, replaces its CEO and entertains possible buyers after a huge drop in subscriber growth, another home-exercise company looks like a far stronger candidate for acquisition by a big-tech name looking to boost its product offering.

Co-founded eight years ago by former JPMorgan Chase banker Eric Min and three partners, Zwift started off as a niche offering for serious cyclists wanting a better indoor training experience. The Long Beach, California-based company has since morphed into the go-to platform for Tour de France winners and Ironman triathlon champions, while broadening its appeal to more casual athletes including runners.

Key to Zwift’s traction is its bring-your-own-bike business model, and a focus on the social elements of fitness. Peloton customers are on the hook for at least $1,495 just to buy the bike — going all the way to $2,035 for extra equipment — and must also sign up for a $39 per month subscription. Zwift, on the other hand, costs just $15 per month but users need to supply their own gear.

Key to Zwift’s traction is its bring-your-own-bike business model, and a focus on the social elements of fitness.

The total cost of ownership for Zwift could easily rival Peloton, but there are two big differences for both the customer and the company. First, cyclists get to choose their own bike, and most just use the same vehicle they ride outside. Extra cost comes from buying a home trainer — a machine that connects to the rear wheel — with users again being in control of just how fancy they want to get. For Zwift, that means no supply chain or inventory risk, since monthly revenues don’t rely on its ability to design, source and ship hardware to clients around the world. That allows it to keep staffing relatively low at about 800 people globally.

Its user experience is also far more sleek. Instead of hiring celebrity trainers for up to $500,000 a year, Zwift developed virtual reality scenes and social interaction that has turned its iOS and Android apps into a daily meeting point for cyclists from around the world. These environments, called worlds, include fully made-up landscapes such as a lava-spilling volcano, the fictitious land of Watopia and virtualised incarnations of well-known cities. Cycling through New York’s Central Park is done on an elevated glass track.

This makes Zwift one of the world’s largest and longest-running virtual reality platforms, and a far better acquisition target for Facebook owner Meta than Peloton. Founder Mark Zuckerberg is no stranger to the product, he used Zwift after breaking his arm in 2016, and is so keen on virtual reality, also called the metaverse, that he changed the company name to reflect his new passion.

Apple could also consider buying the company. With hundreds of thousands of users hooked up to heart-rate monitors, cycling power meters, and logging mile after mile of exercise, Zwift would offer the iPhone maker a leg up in its quest to become consumers’ primary health-tech platform. Amazon.com and Nike are other reported suitors for Peloton, but Zwift might be a stretch.

People will be creating digital avatars of themselves to explore the online world, and each other
Life
6 months ago

Any buyer considering a purchase needs to be wary, though. Zwift does have competitors. Spain’s BKool and Czech Republic’s Rouvy offer similar experiences with a mix of VR — entirely virtual worlds — and augmented reality, where cyclists ride through streetscapes of actual roads and championship courses. And its software-only business model is about to end, with Zwift preparing to launch its own hardware, including an indoor bike similar to Peloton’s but without the screen, and a smart trainer that will put it in direct competition with long-time partners including Wahoo Fitness and Garmin’s Tacx range of home trainers.

Its decision to take the plunge into hardware could set Zwift up for a decade of growth, or doom it to the same struggles faced by Peloton. The latter this week cut its full-year revenue forecast by about 20% to $3.75bn after earlier reports said it was halting bike and treadmill production for two months as growth slowed.

Yet the company sees that move into self-branded equipment as crucial to its next phase of growth particularly as it seeks to widen its market to include more casual cyclists and runners. It will also allow the company to be less reliant on the likes of Wahoo and Garmin, whose products are a key part of the overall Zwift experience.

Instead of scaring away a possible buyer, this broader strategy may convince an acquirer that it’s more than just a hip software company for Type-A fitness fanatics. Any deal might come down to the right price.

In its last funding round in September 2020, led by private equity firm KKR, Zwift raised $450m at a reported $1bn valuation. Yet pandemic-driven growth, is likely to have pushed that up further, with paid users climbing 2.1-times in the financial year to March 2021, while peak concurrent users jumped from 18,000 to 48,000, spokesperson Chris Snook told me recently. Total paid subscribers remains a closely held secret.

Any suitor’s ability to get its hands on Zwift may come down to what future vision it can offer to Min and his team. The avid cyclist started Zwift because he saw a need to make indoor exercise more fun and social, and that’s an experience money can’t buy.

ANDREA FELSTED: February or March could be the new January gym boom period

And the Oscar goes to ... here are some hints

And the Oscar goes to ... here are some hints