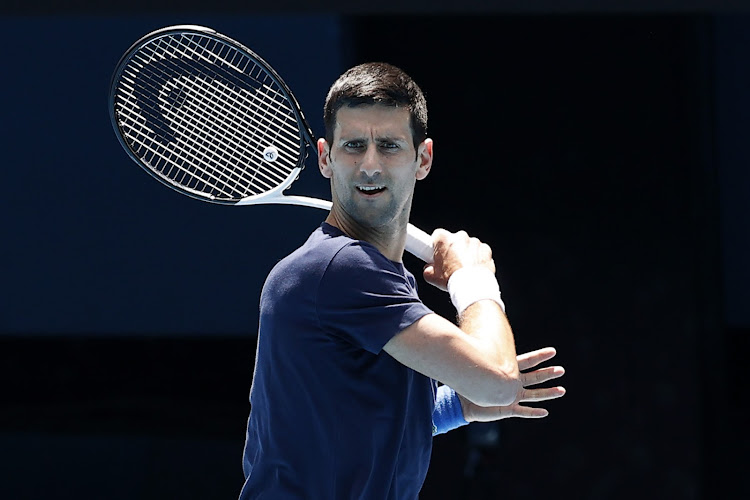 Novak Djokovic during a practice session ahead of the 2022 Australian Open at Melbourne Park, Australia. Picture: DARRIAN TRYANOR/GETTY IMAGES

In the epic match of Novak Djokovic versus the Australian government, we are at the end of the sixth set.

After an Australian court dismissed his appeal against having his visa revoked, the world number one tennis player has had to forfeit his chance of an historic 10th Australian Open title — a trophy that would pretty much seal his claim to be the GOAT (greatest of all time) in his sport.

Rightly so, many think. Djokovic is the Marmite of tennis players, after all. Tennis fans either love him (the clinical game, the movement) or loathe him (the bathroom breaks, the showy post-match gestures).

Others may just be happy that a celebrity who has touted his opposition to vaccines got caught out when trying to manoeuvre around the rules others must follow.

And yet, this doesn’t mean the Australian government has won clean either.

The tennis player double-faulted before even stepping foot in the country — failing to report recent travel to Spain on his Australian visa application and holding publicity events after having tested positive for Covid-19.

However poorly Australia’s border force handled his late-night arrival — Djokovic challenged his detention and an Australian court agreed with him — he chose (it’s assumed) not to be vaccinated and left the form-filling to an underling.

As with outrage in Britain over Downing Street parties during lockdown, which threatens Prime Minister Boris Johnson’s position, the attitude of exceptionalism makes it easy to side against Djokovic.

Add in the stringent measures Australians have endured throughout the pandemic — especially the draconian travel restrictions and quarantines — and it’s no wonder Prime Minister Scott Morrison, who faces an election this year, spotted a large target.

His immigration minister, Alex Hawke, revoked Djokovic’s visa on Friday "on health and good order grounds" saying it was in the public interest to do so.

"The Morrison government is firmly committed to protecting Australia’s borders, particularly in relation to the Covid-19 pandemic," he said.

The tennis star then appealed against Hawke’s use of discretionary powers, but failed to convince the court, which on Sunday dismissed his case. He has since left the country.

Despite the court ruling, it’s worth asking what deporting Djokovic accomplishes.

The idea that his refusal to be vaccinated could "excite anti-vaxxers" doesn’t seem serious. While he has refused to reveal his vaccination status, his opposition to vaccines is a matter of public record, so he is already a poster boy for those similarly opposed. And most in that camp don’t need the validation.

Plus, the player was sure to get a cool, if not hostile, response from a once-enthusiastic Australian audience who, as Morrison noted, had sacrificed mightily to comply with lockdown rules.

More importantly, what actual health risk did Djokovic pose? Assuming he did indeed test positive on December 16, or around then, his antibody levels would presumably be comparable to someone who has been vaccinated.

Australians can usually get a temporary exemption of up to six months for a PCR-confirmed infection. He would be expected to follow other precautions, such as masking, during his stay. He already had a period of quarantine.

Placing more restrictions on the unvaccinated looks justified, but governments should not dodge their own duty of care
Opinion
5 months ago

In the court of public opinion, which the government has had a close eye on, Djokovic probably wouldn’t have been given a break.

A November study on attitudes towards vaccine mandates showed strong support for serious consequences for the non-vaccinated — and for exemptions to be tightly regulated for medical reasons, not for flimsy personal belief reasons.

In suggesting that Djokovic posed a risk to health and order, however, the government seemed to be stoking the very fears it needs to tamp down if it is to wean people off rules that don’t make sense during the latest phase of the pandemic, when there are far better virus defences and a weaker variant.

Infection rates in Australia have climbed to the highest point since the pandemic began, with the seven-day average now more than 108,000 and the total number of confirmed Covid-19 cases reaching more than 1.6-million on Saturday.

Hospitals in the worst-hit states, already dealing with staff burnout, face the crunch from rising admissions and staff shortages due to illness and isolation requirements.

Stringent border controls — and especially lengthy quarantines — at this stage of the pandemic impose a heavy socioeconomic cost for no discernible health benefit.

New South Wales health authorities have said that more than 90% of the cases there are the milder Omicron variant, while more than half of those in intensive care in the state are unvaccinated (vaccination rates there are 94% for those aged 16 and over).

Part of the alarm about rising cases in Australia has been a shortage of antigen tests. The Djokovic drama has provided a convenient distraction from the government’s liability there.

But sometimes a player wins a match despite a flawed game. Maybe the opponent shows up poorly prepared, or an unorthodox tactic catches him off-guard. Both seem to be the case here.

Australia’s government may score some points by deporting Djokovic, whose approach to vaccines and visa forms left him open to attack.

But in riding the wave of public indignation, the government has undermined its own case for a much-needed change in pandemic strategy and failed to rectify the problems in its own game.

The problem with not looking up

The problem with not looking up