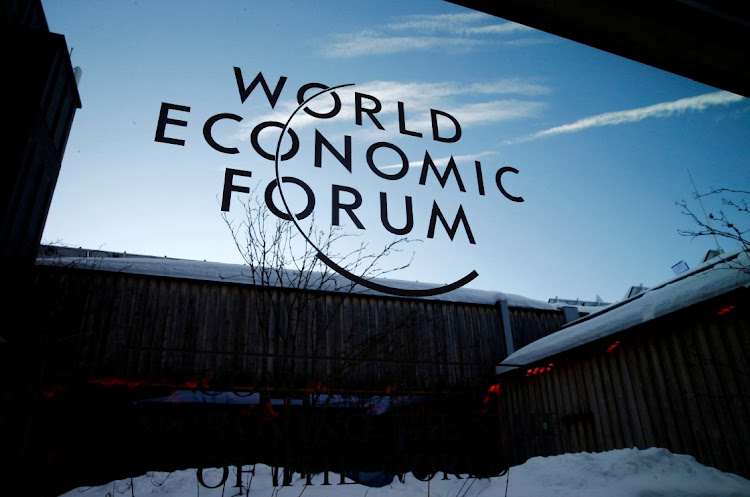 A logo of the 50th World Economic Forum annual meeting is pictured on a window in Davos, Switzerland, in this January 21 2020 file photo. Picture: REUTERS/DENIS BALIBOUSE

The World Economic Forum (WEF), arranger of the annual Davos jamboree, has just published its 17th annual Global Risks Report. It makes for thoroughly depressing reading — for its context as much as its content.

Male, pale and stale remains the defining characteristic of the Davos crowd. About two-thirds of the more than 900 survey respondents were male, with almost half based in Europe and more than 40% aged 50 or over. More than 40% were business executives, with 16% working in government, 17% in academia and 10% in nongovernmental organisations.

But the gender imbalance is not the most disconcerting aspect of the report. Five of the top 10 risks that survey participants said are the most severe facing the world in the coming decade are tied to the environment. The top three all stem from the climate emergency, with “climate action failure” deemed the biggest global threat in the next 10 years. So much for all those COP conferences and the 2015 Paris agreement designed to limit global warming.

It is particularly disheartening for two reasons. First, it has been five years since the failure to address climate change initially rose to the top of the Davos worry list, and yet the situation seems to be getting worse. The WEF’s report ranked extreme weather events as the world’s most challenging peril from 2017 to 2021, and yet the planet continues to overheat. 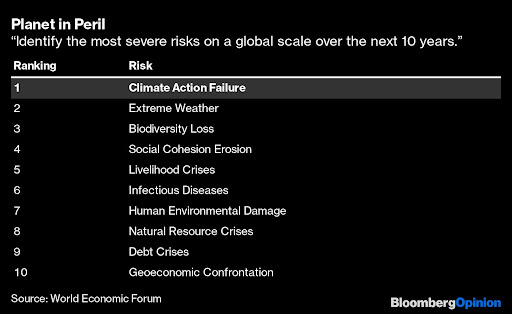 In the past half-century, the last seven years rank as the hottest on record, according to data published earlier this week by the EU’s Copernicus Climate Change Service. The numbers show 2021 was the fifth warmest period in 52 years, and hotter than both 2015 and 2018. A surge in atmospheric methane, a greenhouse gas more than 80 times more powerful than carbon dioxide in contributing to global warming, helped make July the hottest single month ever recorded by the National Oceanic and Atmospheric Administration. No wonder wildfires have become almost commonplace in many regions.

The second reason to be dismayed is that of all the risks that society faces, the tools are available to governments to ease, if not end, the climate crisis. Terrorist attacks, natural disasters and cybercrime — all of which have featured prominently in the WEF rankings in recent years — are slippery, amorphous dangers to tackle. Taking action to stop destroying the planet is practical and achievable.

And yet even rich nations continue to miss their targets. Germany’s emissions climbed 4.5% in 2021 compared with the previous year, according to think-tank Agora Energiewende. The country will probably fail to achieve its goals this year and next and has a “drastic deficit” in its efforts to tackle global warming, German economy minister Robert Habeck said earlier this week.

Curbing greenhouse gas emissions is neither easy nor cheap, but at least it is measurable and within the purview of concerted government action to achieve. Let’s hope that in the coming years, countries take enough steps for the climate emergency to drop off the WEF’s hazards facing the world.

The event, which was due to take place in January, has been delayed until early summer due to the uncertainty over Omicron
World
3 weeks ago
Next Article