Robinhood is little more than Candy Crush with financial consequences 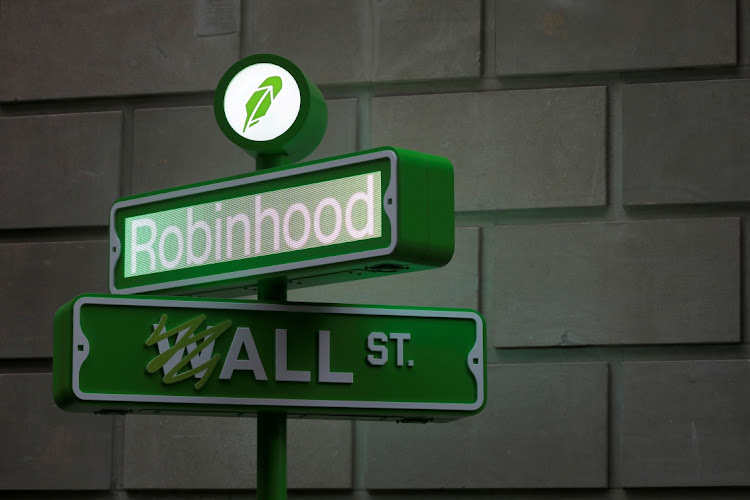 The logo of Robinhood Markets is seen at a pop-up event on Wall Street after the company's IPO in New York, the US, July 29 2021. Picture: REUTERS/ANDREW KELLY

It’s been quite a year for brokerage firm Robinhood Markets,  from a rollicking initial public offering to technical glitches that blocked its customers from accessing their accounts, and from capital raising efforts to questions about how it guarantees the best execution of trades. Today, the shares are languishing near $15, cutting its market capitalisation to about $13bn from a peak of $60bn back in August.

But is the carnage in Robinhood stock overdone? After all, Robinhood has 22-million users, which is worth something, even if the average account balance is only $3,500. The thinking is that small accounts will grow into large accounts as Gen Zers and millennials get older, earn more money and stick with Robinhood instead of bolting for a more established brokerage with more offerings. Charles Schwab has 32-million accounts, with an average value of $240,000. Schwab also sports a $172bn market cap, which values the company at $5,375 per account, versus $6,300 for Robinhood. By these metrics, Robinhood still looks a bit expensive even after the decline in the price of the stock.

At issue, potentially, is the practice of payment for order flow. Robinhood doesn’t charge commissions on trades and instead receives payments from brokers for routing trades to them. This creates a potential conflict of interest, as Robinhood can place orders where execution may be inferior, though the firm maintains that doesn’t happen. Securities and Exchange Commission (SEC) chair Gary Gensler has indicated that the agency will be taking a hard look at payment for order flow arrangements, and some people interpret this to mean the SEC will ban the practice.

If that happened, it would not be good for Robinhood because 80% of its revenue comes from payment for order flow. Robinhood (and other brokerages) might need to charge commissions on trades to survive. I expect Robinhood might resist charging commissions until it became clear that the viability of the firm was threatened, because it goes against the entire ethos of the firm.

I have no ideological axe to grind with payment for order flow as the arrangements evolved out of natural market forces and, besides, if we are talking about inferior execution, it’s in tiny fractions of a penny and barely noticeable. But the one problem that I do have with payment for order flow is that execution costs are not explicit to the investor. There is a cost to execute a trade; you just don’t know what it is. And if you don’t know what the cost of something is, and it seems to be free, then you are probably going to overconsume it, which is exactly what happened, leading to a surge in revenue for Robinhood in 2020 and 2021.

Robinhood seems to thrive in periods of volatility. It’s hard to say how much revenue it derived specifically from its clients participating in the GameStop and AMC Entertainment Holdings meme stock frenzies, but probably a lot. Meme stocks, though, have been slowly deflating, and the indefatigable AMC “apes” have lost the ability to manipulate that stock higher. Robinhood’s gamification of trading was perfect for meme stocks but is not well suited to buy-and-hold investing. This isn’t going to end well for Robinhood or its customers.

Robinhood’s success will be entirely dependent on its ability to transform penurious day traders into affluent investors — and find ways to monetise its client base other than just through transaction-based revenue. To the extent that Robinhood thinks it has succeeded in democratised investing, all it has really democratised so far is losses for holders of meme stocks. It has the name brand, recognisability and infrastructure to be an investing powerhouse but as long as it continues to direct its efforts towards short-term trading and away from long-term investing, it will never be much more than an entertaining sideshow in the investing marketplace.

Turning the company around will require an enormous strategic overhaul and a complete abandonment of the values that made Robinhood a success over the past two years. It will have to become the very thing that it despises: Wall Street. The reasons other banks and brokerages have become successful is that they provide actual value to customers and charge them for it. In its current incarnation, Robinhood is little more than Candy Crush with financial consequences.

It would be a shame to let what it has built go to waste. The most likely outcome here is that when the stock falls low enough, it will be acquired by one of the online brokerage giants. Those accounts are worth something to somebody.

Young retail investors may be too bullish on stocks