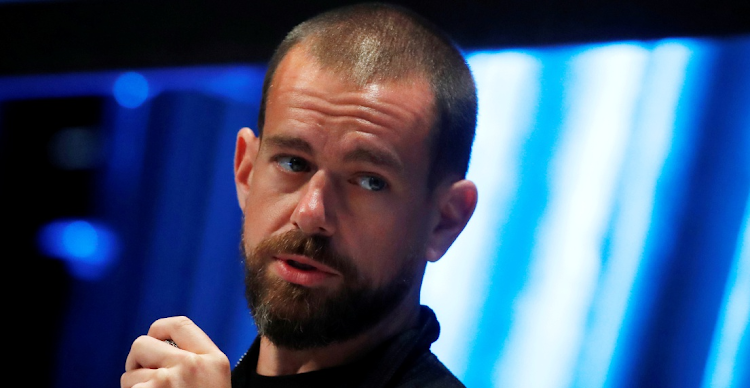 A new year’s resolution for billionaire Jack Dorsey: spend more time on Tidal, the music-streaming platform recently acquired by his fintech firm Block, and less time on Twitter, where he’s no longer in charge but still making himself heard.

Block’s $297m purchase of a majority stake in Tidal was one of many post-Covid music milestones over the past year, as superstar artists proved increasingly reliable and durable pandemic cash cows. Bruce Springsteen and the late David Bowie’s estate sold their back catalogues for reported nine-figure sums; an eight-hour Beatles documentary became a water-cooler moment for Walt Disney; and Adele indirectly broke the vinyl supply chain.

But given Tidal is a streaming minnow next to Spotify and Apple Music, whose combined market share is about 50%, it shouldn’t just mimic the elite hierarchy of the streaming giants. Hippie-capitalist Dorsey has said he wants to improve “economic empowerment” and “financial freedom” for all musicians, a worthy goal that merits more resources than hyping volatile cryptocurrencies like bitcoin or “hyperinflation” warnings.

Music is undergoing a very unequal rebound, rather like the wider economy. Music “got free” two decades ago when digital MP3 files made songs infinitely and instantly shareable; it then got $9.99-ified with the rise of all-you-can-hear streaming subscriptions. This brought industry revenues back to 20-year highs and buried the CD, but deepened the split between the music industry’s haves and have-nots, with the top 1% of artists pulling in an estimated 90% of streaming royalties.

What the streaming economy foreshadowed, Covid-19 delivered. Revenue from live music, the last refuge from halfpenny streams for music’s 99%, slumped by about two-thirds in 2020, according to Bloomberg Intelligence analyst Amine Bensaid. Moving everything online made the pie bigger but also meant many more mouths to feed, says Will Page, former Spotify economist and author of Tarzan Economics. 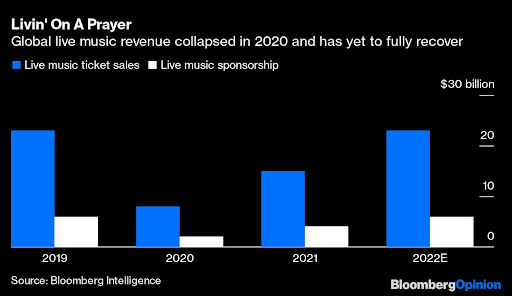 If music be the food of post-Covid capitalism, play on — provided everyone gets a fair share of the revenues. Picture: BLOOMBERG

Singer-songwriter Sam York, who has performed with the likes of Ed Sheeran and Jessie J, tells me he was already switching careers before 2020 — he is now a lawyer — and that he’s seen other artists become plumbers or join call centres since Covid-19. It’s a crisis of unlimited supply, he says.

Left unchecked, these Hunger Games are going to get worse. Music is falling behind in the attention economy, with Spotify losing a quarter of its value in 2021 while Facebook parent Meta Platforms and Netflix stormed ahead. We now consume music in playlist-sized gulps to fit meals or moods, and it’s harder to attach value and intimacy to what Bowie once likened to “running water”.

And while the superstars of old will be repackaged, meme-ified and turned into holograms to ensure their longevity — Stephen Witt, author of How Music Got Free, tells me he imagines a Get Back-style documentary could be a regular occurrence for boomer artists — those lower down the chain will face even more pressure, not least as podcasts and audiobooks multiply. No wonder music listening, which used to be a series of monogamous relationships with albums and bands, now resembles Tinder’s hook-up culture, says MIDiA Research analyst Mark Mulligan.

Given all of this gloom, where does Tidal fit in? The platform could at least fly the flag for a fairer division of the streaming spoils at a time when regulatory scrutiny is rising. More “user-centric” payment models, parcelling out those $9.99 subscription fees according to individual tastes (and not global streams), deserve to be tested. Tidal recently cut a deal with digital distributor DistroKid allocating 10% of its premium $19.99 service to users’ most-listened-to artists.

Dorsey could also take a leaf out of the book of platforms like Kickstarter or Patreon — linchpins of the so-called “creator economy” — that allow artists to raise money directly from fans. Investing in do-it-yourself tools might attract more artists and improve their finances. Research by Page estimates that a creator’s revenue-per-hour from a stream on a music platform equates to about $0.01 per user, while on a Twitch live-stream it’s $0.15 per user.

These are not magic wands: a user-centric streaming model might only reshuffle elite revenues rather than revolutionise music, and subsistence farming on Patreon is still subsistence farming. Not everyone is going to adapt to a world inexorably headed towards financialising social interactions and a sense of belonging — an entry ticket to an infinite discotheque, as economist Jacques Attali once put it. The hype around overpriced and speculative NFTs has achieved little beyond enriching a murky elite and drawing the ire of Brian Eno.

Still, any chance at creating new life instead of embracing the undead grip of rock aristocracy is worth trying. Tidal and Block, which was recently awarded a banking charter, could be the laboratory for what venture capitalist Li Jin called a creator “middle class”. Imagine what a dependable payout like a Universal Creative Income could do. Dorsey should aim for a more Tidal, less feudal, future.

Chinese gaming and social media company Tencent will hand a $16.4bn JD.com stake as a dividend to its shareholders, weakening its ties to the ...
Companies
6 months ago

Megatrends to watch in 2022

Brands need to find new ways to sell in an era when retailers can use many channels, ideas and concepts to advertise products
News & Insights
6 months ago
Next Article