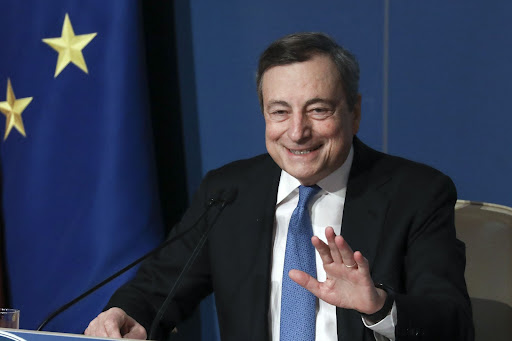 Draghi, the former European Central Bank chief, has guided his country through a horrific pandemic year — and Italians want to keep him in charge longer. Picture: BLOOMBERG

In the 10 months since he became prime minister, Mario Draghi has brought to Italy a period of bounty and stability unprecedented in recent times. So getting him to stay in a position of authority — any position of authority — in Italy for as long as possible has become a mantra in Italian political and business circles. It’s a mounting concern given the historical precariousness of the country’s governments and coalitions.

Even though Germany and France are the EU’s biggest economies, the future of the European project depends on whether Italy — the third largest — can grow after stagnating for two decades. The past year under Draghi has seen Italy post 6.3% growth. He’s provided the stability and impetus for the structural reforms demanded by Brussels in exchange for more than €200bn ($226.4bn) of post-pandemic EU funds.

According to his most ardent supporters, the easiest route to an extended Draghi era is for him to quickly move into Italy’s presidency. The role doesn’t have executive powers but, if chosen by Italy’s parliament in February, he could hold the office for seven years, becoming a kind of lofty guarantor for the country in the wider realm of the EU and the world.

Since the time he ran the European Central Bank, there’s been talk of Draghi’s interest in the ceremonial job back home. He winked at the ambition at his year-end press conference on December 22 when he described himself as a “grandpa at the service of the state.” He is a candidate without equal to become the president of the Republic. But what looks like an easy option has inherent risks.

The first is that the latest polls indicate the far right would be most likely to gain power if elections are called early this year, which could happen rapidly if Draghi moves to the presidency. Give it another year and a centre-left grouping led by former prime minister Enrico Letta, which triumphed at recent local mayoral elections, has more time to rebuild itself on the national stage.

As president, Draghi would take over an office that has had to exert kingmaker influence lately. It was Sergio Mattarella, the outgoing president, who called on Draghi to head a cross-party unity government amid the pandemic crisis because the country’s politicians couldn’t reach agreement themselves. Without Draghi, political power remains fragmented. Most recent polls put the main parties — from the far right to the centre-left —  at about 20% of the vote each. That is likely to mean more rocky coalitions and revolving door governments — and an increasingly powerful president. Draghi’s stature would certainly further enhance the office.

But Italy is a parliamentary democracy, unlike France — where politics revolves about the presidency. Making the office more powerful would create its own tensions. Draghi’s mooted shift is already being described as the dawn of a “semi-presidential” Italian Republic — and  not in a good way. In an almost aspirational manner, figures on the Right, including the League’s deputy Giancarlo Giorgetti, have compared a Draghi presidency to Charles De Gaulle’s after the ruins of World War 2.

But Italy as a semi-presidential Republic is a fudge: It’s legally impossible without sweeping change to the constitution. A presidency with executive powers — even non-explicit ones — infringes on the intentions of a document drawn up in 1948 to prevent a revival of strongmen like Benito Mussolini. That should still apply if the strongman is credited with saving the euro.

Giuseppe Franco Ferrari, an expert in constitutional law at Milan’s Bocconi University, notes wryly that “a president cannot be prime minister in pectore within the Italian system” — a reference to the way popes kept the appointment of some cardinals secret and “in the heart.”  Draghi’s approval rates are high — at 65%, according to recent polls — but, if his elevation into the presidency isn’t immaculate, even his popularity may be vulnerable to Italy’s  increasingly violent, populist anti-establishment movement.

Italy still faces other challenges beyond its pandemic year. At home, the to-do list includes reforming the tax system, undertaking other legal and structural reforms, responding to a fourth Covid-19 wave and selling the struggling bank Monte dei Paschi di Siena. The list of tricky projects abroad is equally daunting: an urgent rewriting of the EU’s fiscal rules, the pursuit of closer relations with Germany along the lines of a friendship treaty agreed last month with France, a stronger European defense in the face of mounting pressure from Vladimir Putin.

Then, of course, if Draghi remains prime minister, someone else must be president — even if its another technocrat like finance minister Daniele Franco. The main concern is that the job could go to the disgraced media tycoon and former prime minister Silvio Berlusconi — though the chances of that are diminishing given he's unlikely to win the necessary two-third of parliament.

Regardless, it will still be hard to find a candidate better than Draghi to keep the peace within the unity government. Crucially, Italy needs stable government to the end of the legislature in 2023 to maintain, or exceed, its target to have boosted GDP by three percentage points by 2026. Stronger growth is key to keeping Italy’s vast debt load sustainable, especially when the country’s debt-to-GDP ratio ended last year at 160%.

But there’s one option that could serve both Italy and Europe just as well: Draghi stays on as prime minister to the end of his government’s term in 2023, drives through the reforms and makes sure Italy spends the EU’s pandemic rescue funds effectively. After that, he can be off the Italian political hook because the job of President of the European Commission will be available in 2024, when Ursula von der Leyen’s term is over. It’s an executive role that’s arguably more suited to his ambition, clout and vision of a more integrated Europe. And he’d still be a year younger than Joe Biden when he became US president.

Shrouded in secrecy, the complicated process to elect the president is often compared to the papal conclave which elects the head of the Roman ...
Businessweek
6 months ago

On the 30th anniversary of the fall of the Soviet Union, we asked historians, economists and political analysts why it happened, and what lessons it ...
Opinion
6 months ago
Next Article