Dominated by extremist ideologues who value their notion of individual freedom above the public good, party is unwilling to impose the necessary measures 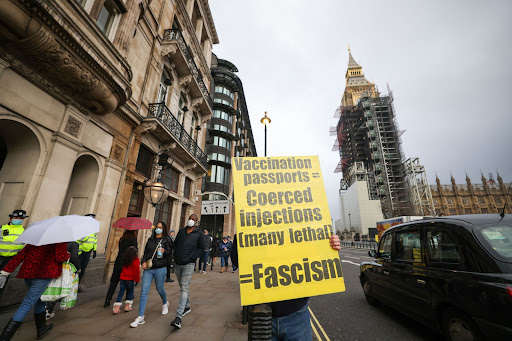 Coronavirus cases are once again exploding in the UK. Yet Prime Minister Boris Johnson’s Conservative government, dominated by extremist ideologues who value their notion of individual freedom above the public good, is again unwilling to impose necessary measures — a reluctance that has already cost innumerable lives in previous Covid-19 waves.

Last week, about a hundred Tory MPs voted against a very modest government plan that mandates the wearing of masks and vaccine certificates in some places. As hospitals fill up again with Covid-19 patients, they talk about an ancient British tradition of liberty. “We’re not a ‘papers please’ society,” Tory MP Marcus Fysh claimed, ‘This is not Nazi Germany.’”

Given such antigovernment rhetoric, you might not guess that Johnson, who has been dogged by reports he was partying at his official residence during a general lockdown last year, and has often appeared maskless in public spaces, matches Donald Trump in his disdain for public health regulations.

Or that the British media, overwhelmingly right-wing, provides the background chorus for “freedom” from Covid-19 restrictions. In fact, it led the Tory celebrations of Freedom Day in July this year.

The celebrations were as foolish as they were premature. Now, in the last week of 2021, the world watches again appalled as Omicron spreads fast, and rowdy invocations of “personal responsibility” and “individual choice” delay preventive moves in the UK — and, by extension, everywhere else.

Public-spiritedness is by no means alien to Britain; its present-day embodiment, the National Health Service, was widely applauded during the early weeks of the pandemic. Tory fanboys of Winston Churchill like to invoke his lonely defiance of Nazi Germany as they insist on their right to remain maskless. But there is no record of Tory freedom-lovers keeping their lights on at night during the blackout enforced by Churchill’s government in 1940.

Contemporary Tory libertarianism derives from the American ideologue Ayn Rand more than any ancient British tradition of liberty. And the modern contempt for collective welfare is largely a legacy of the revolution launched by Ronald Reagan and Margaret Thatcher in the 1980s. Thatcher notoriously doubted the existence of “society”; Reagan claimed that “the nine most terrifying words” are “I’m from the government, and I’m here to help.”

The strange thing is that the battles launched by Reaganites and Thatcherites against tax rates, protectionist industry and labour union privilege were won a long time ago. Libertarians in the US even managed to discredit major government involvement in healthcare.

So, what makes Anglo-American individualists so dangerously inflexible, even self-destructively fanatical, nowadays?

Two recent events have spoiled the show for them. First, the rise of China, which proved again — after the previous successes of Japan and the East Asian countries — that government intervention is crucial to national success in education and healthcare as well as industrial growth and technological innovation.

The other, arguably more unnerving event, which has occurred right at home, is the increasing assertiveness of historically silent, often disenfranchised peoples: women, non-white immigrant populations, and sexual minorities.

During two centuries of Western expansion and hegemony, a minority of white men enjoyed a relative freedom to do and say whatever they wanted — without much regard for the rights and sensitivities of others. Unsurprisingly, many of them loathe the demand from previously voiceless peoples that old attitudes — ranging from the narcissistic to the selfish and cruel — be reexamined and, preferably, abandoned. The demand is frequently and unfairly derided as “woke”.

Those still clinging to political power and cultural capital would rather stoke conflict and polarisation than admit that their societies are irrevocably diverse, and ought to acknowledge the dignity of people who were once systematically degraded by the gender and racial hierarchies erected by white men.

They naturally fear and loathe scholarship that underlines long-established facts: that the unique wealth and power of a male minority in the West was built on slavery and imperialism rather than any innate superiority, and that the white man’s burden was actually carried by black, brown and yellow men.

Instead, faced with the smallest challenges to their moral and intellectual authority, many historically advantaged males have chosen to double down, accusing activists and intellectuals of promoting “cancel culture” and historical revisionism.

Johnson’s government has prosecuted its war on woke with remarkable zeal and clinical efficiency throughout the pandemic. Indeed, right-wingers talking of freedom are shriller than ever before in Europe and America. Their battle against Covid-19 restrictions has become part of their larger, and very desperate, war against political correctness — an existential struggle, no less, something as urgent as the existential struggle of many nowadays against severe illness and premature death caused by Covid-19.

The consequences for the rest of us are incalculable. While freedom-loving Tories make their last stand, the mounting evidence from elsewhere is that co-ordinated action by governments and solidarity among citizens are what will contain the pandemic.

Indeed, the lesson from the UK — epicentre of Delta and now Omicron, and home to a dysfunctional government and failed ideology — is profoundly ominous: that in societies deliberately divided by culture wars, trust and confidence in an unscrupulous ruling class will inevitably run low, and the pandemic is what will enjoy true freedom.

Many countries are on high alert as the latest health crisis also takes a toll on financial markets, which fear the impact on the global economic ...
World
7 months ago