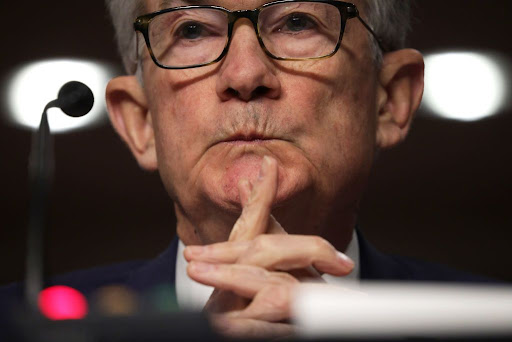 The Federal Reserve’s preoccupation with “transitory” inflation was short-lived. On Tuesday Fed chair Jerome Powell told the Senate banking committee: “I think it’s probably a good time to retire that word and try to explain more clearly what we mean.”

Agreed on both counts. The crucial question for monetary policy was never the one that analysts, with the Fed’s encouragement, have been debating: whether the recent surge in inflation was transitory or persistent. It’s how policy should be set, given that nobody knows.

One group of commentators said the rise in prices was a blip due to the pandemic’s short-term disruptions to supply and should be mostly ignored for monetary-policy purposes. The other said it’s more serious, that inflationary pressures are affecting a wider range of goods and services, pushing wages higher, and threatening to entrench higher inflation unless demand is reined in.

Powell has shifted his allegiance to the second group, and you can see why. Inflation in the US and Europe is a lot higher than central banks expected earlier in 2021, and it’s no longer confined to parts of the economy directly affected by the pandemic. Granted, according to market-based indicators, investors are expecting US inflation to fall back below the Fed’s 2% target within a couple of years, and to stay at 2% or thereabouts after that. But this is a bet on how monetary policy will respond to inflationary pressures through the medium term, not a judgment about the current mismatch between demand and supply.

Eventually, no doubt, blockages will clear, supply will recover and inflationary pressure will ease — partly thanks to the slightly faster pace of monetary tightening that Powell just promised. In other words: inflation is more likely to be transitory now that Powell has said it might not be.

But the main thing is that nobody knows how much inflation will fall, or how soon. The Omicron variant has added new unknowns. More variants might follow. Further cycles of disruption and recovery will compound the confusion.

The Fed’s most important task was to support demand, and it has. Inflation expectations suggest that, for now at least, it’s still trusted to stay on top of the problem. But the Fed’s current policy framework — its self-imposed rules about how it forms and explains its decisions — makes this job harder than it should be. The Fed’s “flexible average inflation targeting”, or FAIT, obliges it to defend judgments it can’t and doesn’t need to make.

There’s a better way, and it’s never looked more appealing than now. Instead of explaining policy in terms of separate targets for inflation and employment, the Fed should announce a target for nominal gross domestic product, or NGDP. This is a measure of output and inflation combined — the value, at current prices, of what the economy produces. In effect, it merges the two sides of the so-called dual mandate into a single measure.

This has enormous advantages. First, it’s simple. Instead of having to revisit, month by month, the contested meanings of “maximum employment” and “average inflation”, the Fed would measure the stance of monetary policy against the gradual evolution of one straightforward aggregate. Second, it’s honest about what the Fed can hope to do with monetary policy. Changes in interest rates and/or central-bank bond purchases don’t directly affect jobs and prices. In the first instance, they move NGDP; how that change affects jobs and prices is beyond the Fed’s control.

A third advantage is especially valuable right now. An NGDP target contends more easily with a supply-side shock. Under the Fed’s current approach, supply interruptions that force output down and prices up create a policy dilemma: Should it prioritise controlling inflation or supporting employment? Wrestling with that dilemma is why the Fed and its army of watchers have been debating whether inflation is transitory. With a target for NGDP, there’s often no need to ask. When supply is hit, inflation is allowed to overshoot until output recovers and NGDP is back on track. Growth of 4% in NGDP, for example, makes inflation of 4% “on target” when growth in output falls to zero.

It so happens that NGDP is now broadly back to its pre-pandemic trend. That suggests a need to curb its future growth, and accords with the thrust of Powell’s latest remarks. Quite possibly, thinking about NGDP has been guiding the Fed all along. If so, why hide it? As Powell just proved, it’s much harder for the Fed to explain itself — and there’s a greater risk of confusing investors and undermining the central bank’s credibility — if it keeps suggesting it can do things it can’t.

By all means retire the word “transitory”. But then give NGDP a try. Better for the Fed to offer a simpler and more modest account of its powers than to pretend it can hit two shifting, vaguely defined and sometimes conflicting targets at once.

The Fed chair finally retired a phrase that had become increasingly meaningless. Now he has to manage the communication and policy challenges of the ...
Opinion
1 month ago