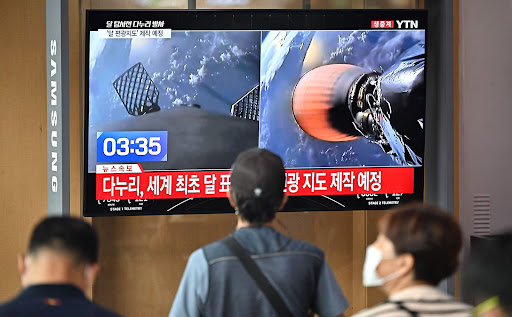 Dubbed Danuri, which means moon and enjoy in Korean, the lunar orbiter successfully established communication with Nasa’s space centre in Canberra 92 minutes after lift-off and successfully entered into planned trajectory.

“It is a very significant milestone in the history of Korean space exploration,” Sang-Ryool Lee, president of the Korea Aerospace Research Institute said in a pre-recorded video. “If we are more determined and committed to technology development for space travel, we will be able to reach Mars, asteroids, and so on in the near future.”

It will travel for four and a half months before entering lunar orbit late in December to begin its mission in January using six lunar payloads, vice-science minister Oh Tae-Seog said in a briefing. KPLO is on a year-long mission, but the period may be extended.

Danuri’s missions include searching for possible landing sites as well as conducting a wireless internet test by streaming a video of K-Pop group BTS’s hit song “Dynamite”, according to South Korea’s Electronics and Telecommunications Research Institute.

The launch comes after South Korea launched its own fully developed rocket Nuri in June that placed a test satellite into Earth’s orbit. The country aims to allocate funds in the coming years to send an uncrewed spaceship to the moon by 2031.

The mission marks a new stage in co-operation between the Korean and US space programmes. The spacecraft is carrying Nasa’s ShadowCam, a camera co-developed by Arizona State University and Malin Space Science Systems, an imaging company based in San Diego. ShadowCam will collect images of permanently shadowed regions, helping the search for evidence of ice deposits, according to a Nasa statement.

This month is shaping up to be a busy one for Nasa’s lunar plans. The agency has set an August 29 launch date for Artemis I, an uncrewed spacecraft that will be the first in a series of missions intended to return astronauts to the moon for the first time since the Apollo programme.

China has dismissed Western concerns over debris, calling it a smear effort as the US-China space race escalates
News
1 week ago

With Starlink, the SKA is not the limit