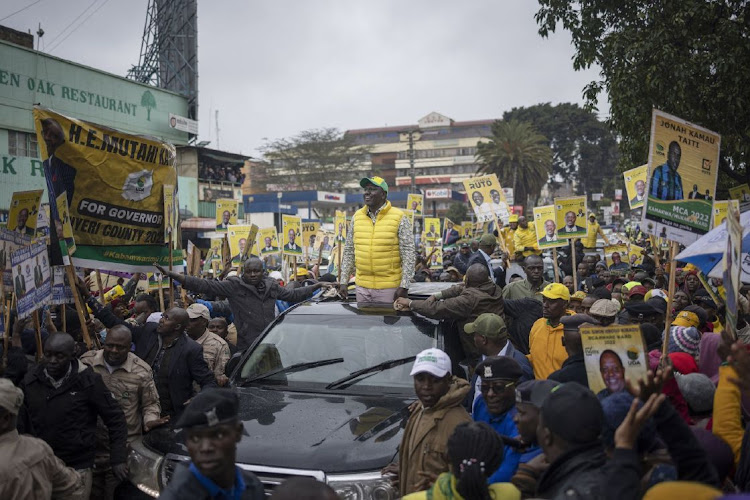 Kenya’s leading presidential candidates ramped up their pledges to address the spiralling cost of living and growing inequality as their campaigns head for the finish line before next week’s election.

Voters go to the polls on August 9 with the fastest inflation in five years and high youth unemployment among their biggest concerns to choose between deputy president William Ruto and ex-prime minister Raila Odinga, the two major party candidates. Both have promised people squeezed by a slowdown in East Africa’s biggest economy a grab bag of subsidies and social programmes.

Ruto said in an interview that he would subsidise farmers in a country where agriculture accounts for a third of GDP and employs more than 40% of the population, according to USAID. He also plans to launch a so-called “Hustler Fund” that will provide 50-billion shillings ($419m) a year of credit to small-scale traders.

“The prices of basic food items have gone up and it doesn’t require any miracles” to address those increases, he said after greeting thousands of supporters gathered in a muddy sports arena in the central Kenyan county of Kirinyaga. “It just requires a clear, coherent programme on subsidies for farming.”

Kenyan inflation accelerated to 8.3% in July — the highest rate since 2017. Economic growth is expected to slow to 5.5% this year, from 7.5% in 2021, as the country grapples with the impact of the war in Ukraine that’s weighing on the global recovery from the coronavirus pandemic, as well as one of the worst droughts in decades that has reduced food security.

Yields on the country’s 2024 Eurobonds surged to more than 20% last month, on concern about the sustainability of the nations debt. The yield fell 27 basis points to 15.2% by 10.49am in London on Friday.

Ruto, 55, focused the tail-end of his campaign on the Mount Kenya region in the centre of the country. The area is a key support base for outgoing President Uhuru Kenyatta, who has backed Ruto’s main rival, Odinga — a septuagenarian former prime minister who’s running for president for a fifth time.

Winning the counties around Mount Kenya, an agrarian region home to the majority of Kenya’s 8-million ethnic Kikuyu population, will be key to winning the election, said Ruto, an ethnic Kalenjin. All of Kenya’s heads of state since independence in 1963 — including Kenyatta’s father Jomo who was the nation’s first leader after the end of British colonial rule — have been either from the Kikuyu or Kalenjin communities.

An opinion poll published earlier this week showed the election will be one of the closest since the advent of multiparty democracy three decades ago. The country faces a runoff vote if neither candidate gets an absolutely majority.

Odinga this week concentrated on his traditional stronghold near Lake Victoria in southwestern Kenya, home to the ethnic Luo people. On Thursday, tens of thousands of people gathered at a stadium in Kisumu, many of them wearing orange clothing symbolising his Orange Democratic Movement to hear him tout Babacare — a plan to provide universal healthcare — and his plans to channel funds towards increasing food production.

“We will find a way of cutting down expenditure so that we will be able to lower the cost of essential goods for people,” Odinga said in an interview after the rally. “What we want is to have food security for the country. If we have to do some subsidies, so be it. We will for example subsidise seeds, fertilisers and chemicals.”

A victory for Odinga would cap two decades of vying for the top job. He’s being backed by Kenyatta despite the president having formed an alliance with Ruto to win the past two elections in 2013 and 2017.

“Kenyans know me so well,” Odinga said, brushing off criticism by opponents that, like Kenyatta, he hails from a dynastic family because his father served as deputy to Jomo Kenyatta. “They know I cannot be the status quo.”

Donor fatigue could mean starvation for 900,000 in West Africa

With more than 38.3-million people food insecure across West Africa, just $1.3bn of the $3.8bn needed has been secured as of the end of June
News
1 week ago