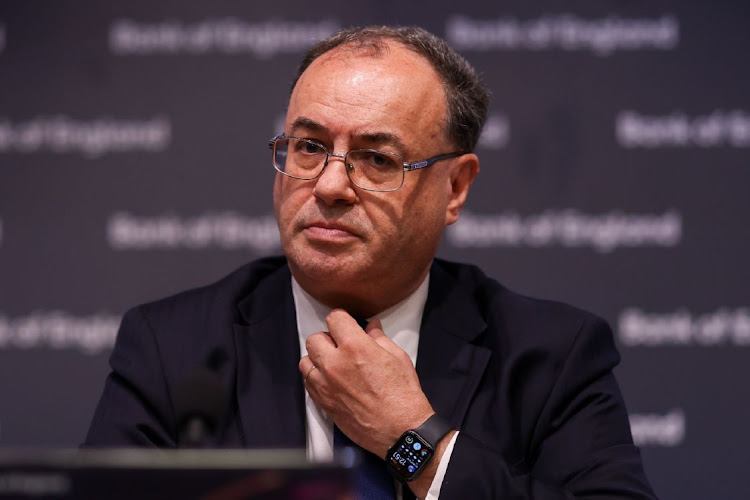 The Bank of England (BoE) announced its biggest interest-rate hike in 27 years on Thursday as it warned the UK is heading for more than a year of recession under the weight of soaring inflation. The pound fell.

The half-point increase to 1.75%, predicted by most economists, on Thursday was backed by eight of the central bank’s nine policymakers, who also kept up a pledge to act forcefully again in the future if needed.

“The committee will be particularly alert to indications of more persistent inflationary pressures, and will if necessary act forcefully in response,” governor Andrew Bailey said  in London. “All options are on the table for our September meeting, and beyond that.”

The pound slid after the move, which was accompanied by warning that a UK recession will begin in the fourth quarter and last all the way through 2023. Sterling weakened as much as 0.7% to $1.2066.

That would be the longest slump since the financial crisis, with officials expecting the economy to shrink by about 2.1% in total.

The BoE also boosted its forecast for the peak of inflation to 13.3% in October amid a surge in gas prices, and warned that price gains will remain elevated throughout 2023. That will sharpen a cost-of-living crisis that will see real disposable incomes fall more than at any time in about 60 years. 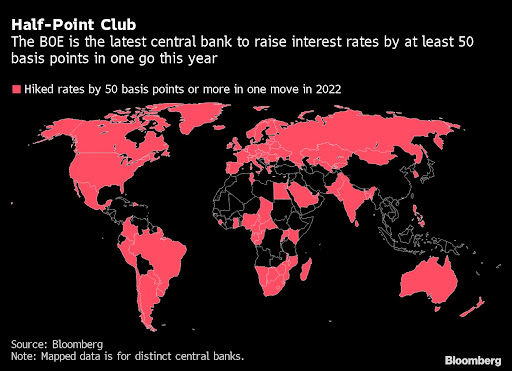 Even after billions of pounds of government support for struggling households, families are set to be about 5% worse off by the end of 2023 with incomes falling both this year and next.

Set against the gloomy outlook, the half-point hike, unprecedented since the BoE gained independence in 1997, is a sign officials led by Bailey are calling time on the era of cheap money and scrambling to keep pace with a wave of global tightening from its international peers.

“It’s hard to recall a bleaker outcome to a central bank meeting than we got from the Bank of England,” said Brian Nick, chief investment strategist at Nuveen. “It’s clear that the MPC [monetary policy committee] is opting to try to ‘crush’ inflation — to the extent a central bank can help push down energy prices — by hiking interest rates quickly even if it comes at the expense of economic growth.”

A key section of the UK yield curve inverted after the decision, a sign investors are worried about an economic slowdown. The yield on 10-year government bonds briefly dipped below the rate on two-year securities for the first time since 2019. Traders see a roughly 80% chance of the BoE delivering another 50-basis-point hike at its meeting in September, according to swaps pricing.

The BoE forecasts feature “exceptionally large” risks, according to Bailey. The outlook, based on average energy bills increasing by 75% to about £3,500 in October, highlights the scale of the challenge awaiting the victor of the race to replace Boris Johnson as UK prime minister.

Inflationary pressures have “intensified significantly”, the BoE said. “The latest rise in gas prices has led to another significant deterioration in the outlook for activity.”

Alongside the decision, the BoE also laid out its plans for reducing the mammoth government bond holdings it amassed during the crisis.

Active sales, the first carried out by a major central bank, are likely to start after a confirmatory vote in September and will be in the region of about £10bn a quarter. Including redemptions, the BoE sees its stock of gilts declining about £80bn in the first year of the programme. Officials said there would be a “high bar” to altering the plan.

Sales of the far-smaller holding of corporate bonds will begin in the week starting on September 19, the BoE said.

Taken together the moves represent a significant step up in its battle against inflation.

While the BoE was the first major central bank to hike rates after the pandemic, and has moved at every meeting since December, it had thus far stuck to smaller, more usual increases. That left it at risk of falling behind the curve, with some 70 other counterparts having shifted by a half-point or more this year.

The Federal Reserve has raised rates by 75 basis points at its last two meetings, while even the European Central Bank kicked off its cycle in July with a half-point rise.

The BoE forecasts, based on a market path for benchmark borrowing costs that peaks at 3% next year, show the economy contracting about 1.25% in 2023 and a further 0.25% the following year. Unemployment, meanwhile, will climb to 6.3% by 2025.

Inflation will peak above 13% later this year, and still be at 9.5% in the third quarter of 2023. After that it will fall rapidly towards the 2% target as the recession saps demand.

The decision feeds into an increasingly acrimonious debate about who is responsible for growing cost-of-living crisis. Bailey referred to that as he acknowledged the effects of BoE rate hikes.

“I recognise the significant impact this will have and how difficult the cost-of-living challenge will continue to be for many people,” he said. “Inflation hits the least-well-off the hardest, but if we don’t act to prevent inflation becoming persistent, the consequences later will be worse.”

The BoE has been blamed in some quarters for acting too slowly in face of the growing inflation threat, and Liz Truss, who is favoured to win the race to replace Johnson as prime minister, has vowed to sharpen the central bank’s mandate if she takes power.

The contest for the leadership has also made the task of forecasting the economy harder. The final two candidates are offering widely differing views on tax cuts and borrowing levels, with Truss advocating the more radical path.

By convention, the BoE bases its forecasts on announced government policy, so the predictions don’t take into account anything brought up during the campaign.

With inflation soaring, the vote split on rates was more forceful than expected, with most economists expecting the nine-member MPC  to vote 7-2 for a 50 basis-point hike.

Only Silvana Tenreyro backed a smaller move, saying rates may already have reached a level consistent with returning inflation to target and flagging worries about squeezed household incomes.

Minutes of the meeting showed officials kept a pledge to move “forcefully” on rates if needed in future — language which paved the way for the half-point hike in August. Policymakers also added guidance that “policy was not on a preset path”.

‘Achieving price stability … means something closer to 2% inflation, so a long way to go’
News
1 week ago

If you think matters of governance are not a threat to central banks outside SA, consider the case of the European Central Bank
Opinion
1 week ago

ISMAIL LAGARDIEN: Inflation is among a multiplicity of crises around the world

ANNABEL BISHOP: Why the Reserve Bank has had to take away the punch bowl

ISMAIL LAGARDIEN: Inflation is among a multiplicity of crises around the world

ANNABEL BISHOP: Why the Reserve Bank has had to take away the punch bowl