Phil Mickelson and 10 other golfers sue PGA Tour after suspensions 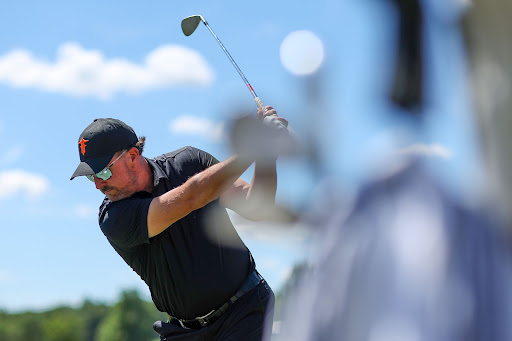 Phil Mickelson and 10 other professional golfers sued the PGA Tour on Wednesday claiming it’s an “entrenched monopolist with a vice grip on professional golf” that’s hurting their careers by suspending them for joining the Saudi Arabia-financed LIV Tour.

The LIV golfers are seeking a court order to lift the PGA’s “anticompetitive” suspensions in an antitrust lawsuit filed Wednesday in San Francisco federal court. Separately, the US justice department is investigating the PGA Tour over potential antitrust violations related to its ongoing dispute with the rival circuit.

The PGA Tour threatened lifetime bans before imposing “unprecedented suspensions” on players and also pushed sponsors, vendors, and agents to coerce golfers to back out of LIV Golf events, “as part of a carefully orchestrated plan to defeat competition”, according to the complaint.

Talor Gooch, Hudson Swafford and Matt Jones are among the golfers suing the PGA Tour. The three players qualified for the lucrative FedEx Cup Playoffs with an $18 million top prize at the end of the tour’s 2022 season, but have been banned from participating, according to the suit.

“The Tour’s conduct serves no purpose other than to cause harm to players and foreclose the entry of the first meaningful competitive threat the Tour has faced in decades,” the players said in their complaint.

LIV Golf has been wrestling with mixed publicity since two-time major champion Greg Norman in March announced the deep-pocketed project that seeks to upend some of the long-standing traditions of pro golf. The series marked its debut in the eastern US last week with a much-hyped launch at Trump National Golf Club in Bedminster, New Jersey.

The PGA Tour was previously embroiled in an antitrust dispute with the Federal Trade Commission in the 1990s. It fended off the agency’s probe over its rules, including one that barred golfers from playing on rival tours without its permission. Back then, Norman planned to launch a rival circuit called “World Tour” and Fox had planned to acquire the broadcast rights.

The PGA Tour warned players they’d be suspended for joining the World Tour and argued its rules were needed to ensure that TV networks and advertisers had enough good players. The commission ended its investigation in 1995 without taking any action.

Prodigious golfing talent wins respect and thanks
Sport
4 weeks ago

PGA Tour boosts prize money to $428.6m for next season

PGA Tour boosts prize money to $428.6m for next season