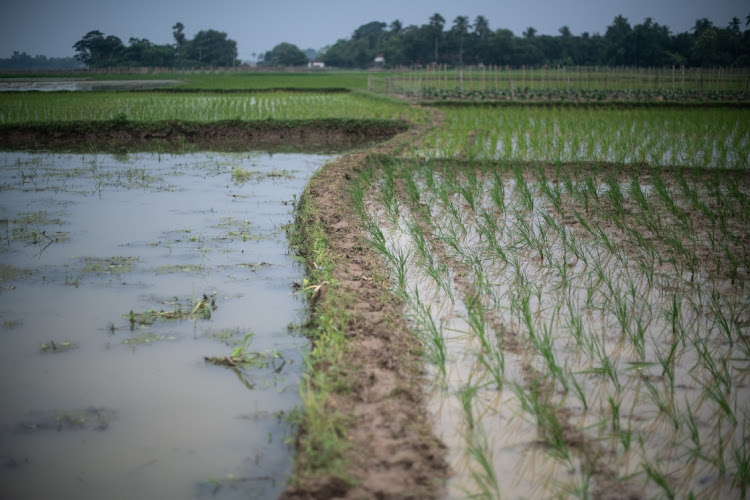 India’s 2022 monsoon rainfall is pushing back rice planting for farmers in the state of West Bengal. Picture: GETTY IMAGES/REBECCA CONWAY

Rice could emerge as the next challenge for global food supply as a shortage of rain in parts of India, by far the world’s biggest exporter, has caused its planting area to shrink to the smallest in about three years.

The threat to India’s rice production comes at a time when countries are grappling with soaring food costs and rampant inflation. The total rice-planted area has declined 13% so far this season due to a lack of rainfall in some areas, including West Bengal and Uttar Pradesh, which account for a quarter of India’s output.

Traders are worried that a drop in rice production will complicate India’s inflation fight and trigger restrictions on exports. Such a move will have far-reaching implications for the billions of people that depend on the staple. India accounts for 40% of global rice trade, and the government has already curbed wheat and sugar exports to safeguard food security and control local prices.

The jump in India’s rice prices reflect concern about output. Prices of some varieties have soared more than 10% in the past two weeks in major growing states such as West Bengal, Odisha and Chhattisgarh due to deficient rain and increased demand from Bangladesh, said Mukesh Jain, a director at Sponge Enterprises, a rice shipper. Export prices may climb to $400 a tonne by September from $365 now on a free-on-board basis, he said.

The situation is really precarious

Most of the world’s rice is grown and consumed in Asia, making it vital for political and economic stability in the region. In contrast to the surge in wheat and maize prices after Russia’s invasion of Ukraine, rice has been subdued due to ample production and stockpiles, helping to ward off a bigger food crisis.

Much is riding on the rice crop in India and the monsoon’s progress. Some agricultural scientists are optimistic that there is still time to continue planting and make up for some of the shortfall. Rain is forecast to be normal for August to September, which may improve crop output.

Farmers are less upbeat. Rajesh Kumar Singh, a grower in Uttar Pradesh, said he planted rice on only half of his seven acres of land due to a lack of rain in June and July. “The situation is really precarious,” he said.

Rice prices are feeling the pressure, said Himanshu, a professor at Jawaharlal Nehru University, who goes by only one name. “Rarely any sowing happens after mid-July, so the hope that it will recover is unlikely to be the case,” he said, adding that a drop in output is a risk to inflation.

Rice could present a fresh challenge to India’s inflation fight. Consumer prices have maintained above the Reserve Bank of India’s tolerance limit of 6% this year, prompting a sharp rise in interest rates.

“Lower areas of rice sowing amid increased demand of imports from Bangladesh and other Middle Eastern countries have pushed up rice prices of different varieties to as much as 30% since June,” said Deutsche Bank economist Kaushik Das. “This poses challenges for the food inflation outlook.”

The central bank may increase borrowing costs further this week as a weakening rupee offsets the effects of falling commodity prices such as fuel and vegetable oils.

If geographic disparities in rainfall persist, it could have a detrimental effect on crop production, negatively affecting economic growth and inflation, according to Sonal Varma, an economist at Nomura Holdings.

India supplies rice to more than 100 countries, with Bangladesh, China, Nepal and some Middle Eastern nations among its largest customers. For the world at large, there are some bright spots when it comes to food security. The US is poised to deliver a bumper wheat crop in the coming weeks, while Ukraine made its first grain shipment since Russia’s invasion.

With India’s paddy output poised to decline in several states, the government should consider reviewing its policy of allocating rice for ethanol production, according to Siraj Hussain, a former secretary of India’s agriculture ministry.

India seeks to boost ethanol production using surplus sugar and rice as part of efforts to cut its fuel costs. Surging food prices following the war in Ukraine have increased the risk of hunger and sparked a “food versus fuel” debate.

“At this point [in] time, it is difficult to estimate the exact level of production loss,” Hussain said. But at current prices, there is hardly any justification in allocating rice for ethanol output, he added.

Singapore, South Korea and the Philippines are candidates for the biggest hikes
News
1 month ago

With memories of the Arab Spring unrest in the early 2010s in mind, investors are fleeing emerging market nations threatened with crippling food ...
News
2 months ago
Next Article