US factory activity continues to cool for second month in July 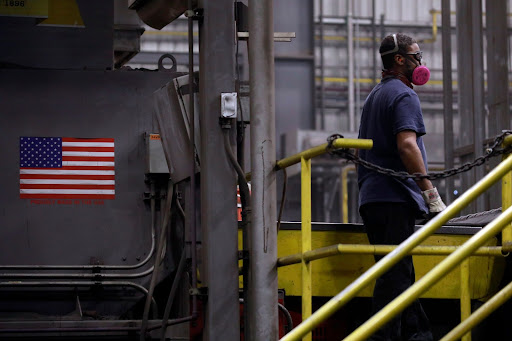 US manufacturing activity continued to cool in July as more factories dialled back production in the face of shrinking orders and rising inventories.

The Institute for Supply Management’s gauge of factory activity eased to 52.8, the lowest level since June 2020, from 53 a month earlier, according to data released on Monday. Readings above 50 indicate expansion, and the latest figure compared with a median projection of 52 in a Bloomberg survey of economists.

The group’s measure of production also fell to a more than two-year low, and its gauge of new orders remained in contraction territory for a second month. The figures highlight softer demand for merchandise as the economy struggles for momentum.

“Panellists are now expressing concern about a softening in the economy, as new order rates contracted for the second month amid developing anxiety about excess inventory in the supply chain,” said Timothy Fiore, chair of ISM’s manufacturing business survey committee.

The ISM factory inventories index rose to 57.3, the highest since 1984 and suggesting stockpiles are mounting at more manufacturers. While many producers have been adding to inventories in the event of further supply-chain disruptions, the increase may also suggest some of the build is unintended.

The ISM overall index is down almost 11 points from its multi-decade peak in March of 2021, when producers were scrambling to meet pent-up demand as the economy emerged from pandemic lockdowns. Spending on merchandise has since slowed as consumption patterns started shifting from goods to services.

The ISM and S&P Global manufacturing data is consistent with a general slowdown in other parts of the world. European factory activity slumped last month and manufacturing output in Asia continued to weaken.

Purchasing managers’ indexes for the eurozone’s four-largest members all indicated contraction, with shrinking confirmed for the region as a whole after an initial estimate on July 22. In Asia, it was China, South Korea and Taiwan that took the biggest hit.

The July measure of prices paid for materials used in the production process — extremely elevated over much of the past year and a half amid supply and demand imbalances — plunged 18.5 points to the lowest level in almost two years.

That marked the largest drop since 2010 and reflected declines in crude oil and metals prices. Almost 22% of respondents reported paying lower prices in July, up from 8.3% a month earlier, the report showed.

Supplier delivery times lengthened, the purchasing managers data showed, yet at the slowest pace since before the pandemic. That, combined with declining orders, likely enabled firms to make progress on unfilled orders. The ISM’s measure of backlogs fell to the lowest since June 2020.

US economy shrinks for a second quarter, fuelling recession fears

US economy shrinks for a second quarter, fuelling recession fears