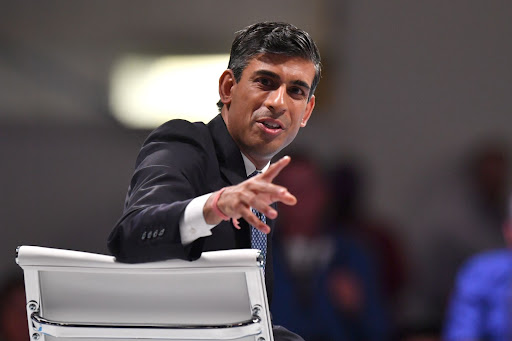 Rishi Sunak, trailing in the race to become the next UK prime minister, committed to reducing personal taxes by 20% within seven years in a move he described as the largest cut to income tax in three decades. Picture: BLOOMBERG

Rishi Sunak, trailing in the race to become the next UK prime minister, committed to reducing personal taxes by 20% within seven years in a move he described as the largest cut to income tax in three decades.

The announcement comes at a critical juncture in the race to succeed Boris Johnson. On Monday, the 175,000 Conservative grassroots members receive their postal ballots to elect Sunak or Liz Truss as the party’s next leader and prime minister. They’re both anxious to secure support before the summer vacation starts in earnest, with the winner announced on September 5.

Sunak said he would cut the basic rate to 16 pence (20 cents) per pound from 20 pence- amounting to a 20% tax reduction and drawing accusations from Truss’s camp of “flip flops and U-turns” on the issue. When he was Chancellor of The Exchequer, Sunak announced a one-penny cut to income tax in April 2024. A further 3p reduction would come by the end of the next parliament.

“It is a radical vision but it is also a realistic one and there are some core principles that I’m simply not prepared to compromise on, whatever the prize,” Sunak said in a statement. “Firstly I will never get taxes down in a way that just puts inflation up. Secondly I will never make promises I can’t pay for. And thirdly I will always be honest about the challenges we face.”

Tax has dominated the bitter race to become prime minister, during which Sunak has called Truss’s tax-cutting plans “comforting fairy tales.” He’s accused the foreign secretary of being “dishonest” with voters with promises of sweeping tax cuts and engaging in an “act of self-sabotage that condemns our party to defeat” at the next general election. He said he would make sure inflation is under control before cutting taxes.

Sunak said Monday Truss’s economic plan amounts to “a borrowing spree” that would cost up to £50bn. “I think that would risk making the inflation problem worse,” he told BBC radio. “I think everyone gets that that is a point of differentiation between us.”

But the Truss campaign appears to be in the ascendancy, with polls of party members putting her clearly ahead. The endorsement of senior Conservatives over the weekend only added to the sense of her pushing ahead. Former leadership candidate, the centrist Tom Tugendhat, endorsed her on Saturday saying her proposed cuts were based on “true Conservative principles.”

On Monday, Chancellor of the Exchequer Nadhim Zahawi came out in her favour, tweeting “in a time of national economic emergency we need action not words.”

“We cannot afford to wait to help families, they need support now,” the Chief Secretary to the Treasury Simon Clarke, and a key Truss ally, said in a statement. “Liz will cut taxes in seven weeks, not seven years.”

A member of Truss’s campaign team, who declined to be named, said the public and Conservative Party members can see through Sunak’s U-turns.

Sunak’s change of heart on tax last week — promising to temporarily slash VAT on energy bills — has not led to any noticeable difference in the polls. However, the ageing membership of the Tory Party is notoriously hard to reliably question and there was some good news for Sunak. A survey of Tory local councillors by Savanta ComRes put Truss on 31% and Sunak on 29% among 511 local Tory politicians — a tighter margin than previous polls of Tory members.

The campaign has been characterised by personal attacks. On Sunday, ministers criticised Nadine Dorries, one of Truss’s backers, for sharing a doctored image of Sunak wielding a knife behind Johnson’s back. The culture secretary retweeted an image of the prime minister, depicted as Julius Caesar, about to be stabbed in the back by Sunak, in the role of Brutus. That’s because it was Sunak’s resignation that sparked Johnson’s downfall.

Tory MP Robert Buckland, a supporter of Sunak, told BBC radio on Sunday that people focusing on personality rather than issues “should wind their neck in.” Business minister Greg Hands, also part of the Sunak camp, called on Truss to disown the behaviour of Dorries, noting that MP David Amess was stabbed to death less than a year ago at his constituency surgery in Southend, Essex.

“It is very, very bad taste — dangerous even,” he told Sky News.

On Monday, Truss is set to pitch herself as the “education prime minister” with a plan that includes replacing failing academies with “a new wave of free schools” and improving math and literacy standards.

She will also promise to tackle labour shortages in farming, partly caused by post-Brexit freedom of movement restrictions, with a short-term expansion to the seasonal workers programme allowing more fruit-pickers into the UK.