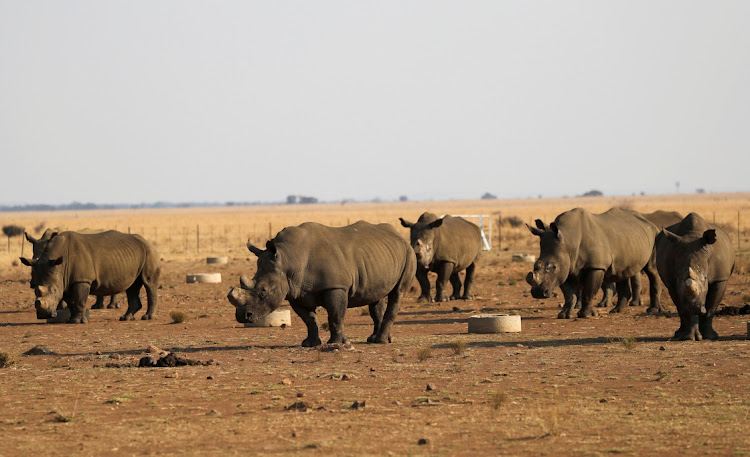 De-horned rhinos at the Buffalo Dream Ranch, the biggest private rhino sanctuary in the continent, in Klerksdorp. Picture: SIPHIWE SIBEKO/REUTERS

The number of rhinos killed by poachers in SA, which has the world’s biggest population of the animals, is set to rise for a second year as criminals shift their focus to KwaZulu-Natal.

In the six months to the end of June, 259 rhinos were killed illegally. That’s 10 more than the same period last year and equivalent to 57% of the total for 2021. KwaZulu-Natal was the hardest with a loss of 133 rhino, more than triple the 33 killed in the first half of last year, the department of forestry, fisheries & the environment said in a statement on Monday.

Recent trends in rhino poaching show a move to private reserves and to KwaZulu-Natal away from the Kruger National Park on the country’s eastern border, Barbara Creecy, the country’s environment minister, said in the statement. Still, the majority of animals poached were on state land. 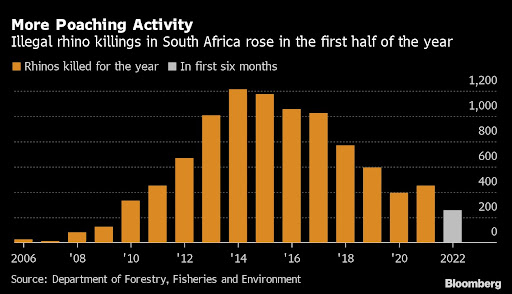 SA is home to most of the world’s white rhinos and some black rhinos. The animals are killed for their horns, which are smuggled to East Asia, where there is an unsubstantiated belief that products made from them treat cancer and increasing virility. The country has been battling rampant poaching for more than a decade and lost more than 1,000 of the animals every year from 2013 until 2017.

The police and wildlife protection services work with authorities in the countries where the illegal rhino horns are being smuggled to. Two field rangers from the Kruger National Park were arrested in April and a former park ranger in KwaZulu-Natal was arrested recently after being found in the possession of two fresh rhino horn, the department said.

Between January and June, 69 people were arrested in connection with rhino poaching and horn trafficking.

Poachers often use deadly force against people trying to stop them. A field ranger, Anton Mzimba, was shot dead at his home in a private reserve near the Kruger last week. His wife was also shot.  South African news website News24 reported that there were claims he was the target of a syndicate because of his anti-poaching efforts.

“The demand for rhino horn remains a constant threat to our rhino populations as crime syndicates continue to operate within our borders,” the department said.

The Overberg once teemed with wildlife, but  the numbers have been radically reduced. The Cape Leopard Trust is out to change that
Life
1 month ago

They were donated by Exxaro Resources, which in 2014 also relocated 10 white rhinos to Botswana to bolster an existing small population
News
1 month ago