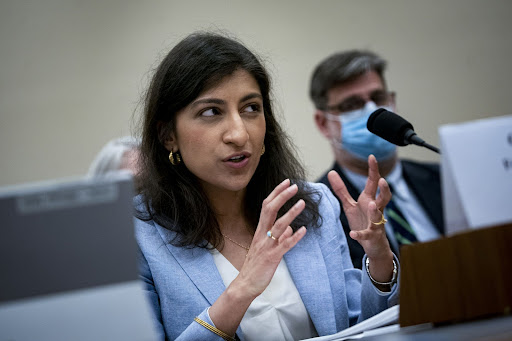 Federal Trade Commission chair Lina Khan led her fellow Democrats in the agency’s majority vote to sue Meta this week, despite the staff recommending against bringing a case to challenge the company’s acquisition of Within Unlimited, according to three people with knowledge of the decision. Picture: BLOOMBERG

Federal Trade Commission chairperson Lina Khan led her fellow Democrats in the agency’s majority vote to sue Meta Platforms this week, despite the staff recommending against bringing a case to challenge the company’s acquisition of Within Unlimited , according to three people with knowledge of the decision.

The move demonstrates Khan’s new, more aggressive approach to antitrust enforcement compared with her predecessors — as well as the challenges she faces in bringing the agency along with her.

Agency leadership has been reluctant in the past to counter a recommendation from staff lawyers and economists, whose job it is to provide a technical assessment of whether proposed deals are anticompetitive and whether the agency has the elements to build a winning case.

In public comments and writings, Khan has emphasised the need to rein in the biggest technology companies, particularly Facebook parent Meta, which she argues has used acquisitions as a form of “land grab” to conquer new markets and “neutralise competitive threats.”

In a 2021 report, the FTC found that the five tech giants — Alphabet, Apple, Amazon, Microsoft and Meta — acquired hundreds of smaller firms over the previous decade, often using loopholes in the law to avoid notifying antitrust regulators about the takeovers.

In the lawsuit filed against Meta on Wednesday, the FTC alleged the deal would give the social networking company a leg up in dominating the burgeoning virtual reality market. The suit represents the first time the agency has preemptively challenged an acquisition by the social media giant, which has bought more than 100 smaller companies over the past decade, according to a 2020 House report.

The FTC has asked a federal court in California to bar Meta from closing the deal until after it has a chance to hear the suit challenging the merger. Meta said it would fight the complaint.

While critics are accusing Khan of overreach in seeking to block the deal, antitrust advocates have urged the agency to be more aggressive in stopping technology giants from acquiring start-ups that could eventually become rivals.

The FTC’s five commissioners split 3-2 on whether to file the complaint, with the two Republicans, Noah Phillips and Christine Wilson, voting against the suit. Each of the commissioners had the opportunity to test out Meta’s Oculus product, Within’s Supernatural and Meta’s Beat Saber, two of the people said.

The lawsuit follows the FTC’s 2020 monopolisation case against Meta seeking to unwind its acquisitions of Instagram in 2012 and WhatsApp in 2014, after failing to challenge them at the time. Phillips and Wilson also opposed that case, which could go to trial in 2024 in federal court in Washington. The FTC alleges the acquisitions were part of an illegal scheme to monopolise the market for social networking.

Meta has denied the allegations and is also contesting that case.

Alvaro Bedoya — who joined the commission in May, giving Khan a Democratic majority — had multiple meetings with FTC staff and Khan’s office about the Within deal to address his concerns about overruling the staff recommendation, two of the people said. Bedoya, through an FTC spokesperson, declined to comment on his deliberations.

Before Bedoya joined the commission, it was deadlocked 2-2, allowing the two Republicans to stymie several of Khan’s more aggressive ideas to promote competitive markets.

Meta announced last October its plan to acquire Within, the maker of the popular virtual reality fitness app Supernatural, for an undisclosed sum. The proposed deal followed Meta’s purchase of six other virtual or augmented reality app makers over the past three years, none of which were challenged by the FTC.

Formerly known as Facebook, Meta rebranded itself last year in an effort to better focus on the metaverse — a more immersive version of the internet, where people can populate an alternative virtual world to go shopping, go to work and see friends. The company is the world’s top VR headset maker with its Oculus product controlling about 80% of the market, according to research firm IDC.

Within’s Supernatural offers immersive VR workouts complete with music and fitness instructors. In its complaint, the FTC alleged that Within’s Supernatural app competes with Meta’s own Beat Saber, a VR rhythm game where users hit targets in time to music. Meta also has the financial resources and expertise to easily add features to Beat Saber or develop a separate dedicated fitness app that could more directly compete with Supernatural, the FTC said.

“The FTC’s case is based on ideology and speculation, not evidence,” Meta lawyer Nikhil Shanbhag said in a blog post about the case. “We are confident this transaction does not reduce competition in any way, will bring countless benefits to people and VR developers, and should therefore be allowed to proceed.”

During the nine-month inquiry, the FTC didn’t take any sworn interviews of company executives, which it often uses to help build a case, two of the people said, speaking anonymously to discuss the confidential probe. But a few weeks before the Within deal was set to close on July 31, Khan’s office sent the company additional questions and began drafting a legal challenge, the people said.

Marketers are spending less due to various economic pressures, leaving Meta and its peers to compete for the smaller budgets
News
2 weeks ago

Russia fines WhatsApp and others for alleged refusal to store Russian users’ ...

Russia fines WhatsApp and others for alleged refusal to store Russian users’ ...