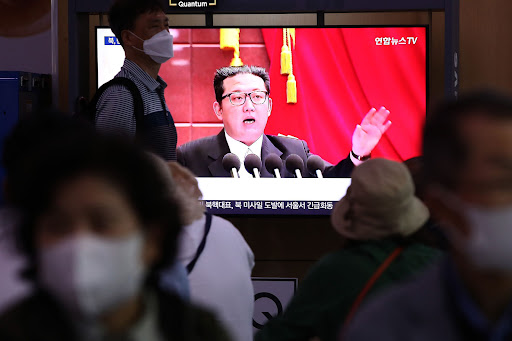 North Korean leader Kim Jong Un threatened to “eliminate” South Korea and said he was ready for any battle with the US in a speech to mark the 69th anniversary of the deal that ended fighting in the Korean War. Picture: BLOOMBERG

North Korean leader Kim Jong Un threatened to “eliminate” South Korea and said he was ready for any battle with the US in a speech to mark the 69th anniversary of the deal that ended fighting in the Korean War.

Kim, making his first appearance in public in nearly three weeks, delivered one of his strongest rhetorical attacks against South Korea since conservative President Yoon Suk Yeol took office in May and pledged to take a tough line towards Pyongyang. The North Korean leader said that “US imperialists are pushing the South Korean authorities into a suicidal confrontation” with his country, the state’s official Korean Central News Agency reported Thursday.

“The South Korean regime and its military thugs are devising tactics to confront us militarily,” Kim said of a potential pre-emptive strike. “Such a dangerous attempt will be immediately punished by our powerful force, and the Yoon Suk Yeol regime and his army will be eliminated.”

The comments marked the first time in North Korea’s state media that Kim referred to Yoon by name.

Yoon’s office in a statement expressed “deep regret” over the comments, adding South Korea was ready to respond to provocations from its neighbour. It also urged Pyongyang to return to nuclear disarmament talks that have been stalled for about four years.

Kim has been stepping up his provocations this year while US attention has been diverted towards Russia’s invasion of Ukraine by firing off a record number of ballistic missiles and showing signs it could conduct its first nuclear test since 2017. The fiery speech serves as a reminder to President Joe Biden of the pressing security problems posed by Pyongyang.

The speech marked the July 27 signing of the armistice agreement among US-led UN forces, North Korea and China that brought a ceasefire to the 1950-1953 Korean War. Even though it ended in a stalemate, North Korea celebrates the day as a “Victory in the Fatherland.”

The US push to isolate Russia over its invasion of Ukraine, coupled with increasing animosity towards China, has allowed Kim to strengthen his nuclear deterrent without fear of facing more sanctions at the UN Security Council. There’s almost no chance Russia or China, which have veto power at the council, would support any measures against North Korea, as they did in 2017 after a series of weapons tests that prompted former President Donald Trump to warn of “fire and fury.”

Kim often drops out of the public eye in the summer for stays at his coastal mansion and megayacht. But any prolonged absence raises questions about the health of the 38-year-old, whose longest time without a public appearance as leader was six weeks in 2014. His last appearance in state media came on July 9 when he appeared at a photo session with ruling party cadres.