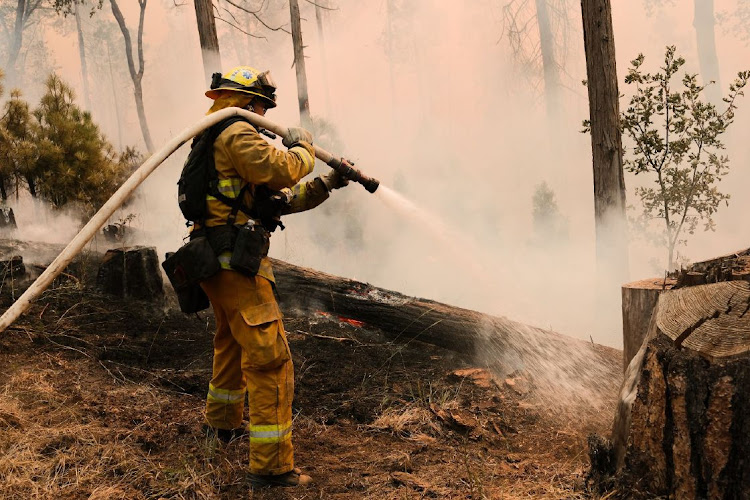 A firefighter works to contain a fire in order to save a structure located near Jerseydale Road during the Oak Fire in Mariposa County, California, US. File photo: BLOOMBERG/DAVID ODISHO

Extreme weather linked to climate change caused about $65bn in total losses in the first half of 2022, roughly half of which hit uninsured assets, according to data compiled by Munich Re.

Insured losses reached about $34bn, broadly in line with previous years, the German reinsurer said on Thursday. The half-year data for 2022 doesn’t include the full fallout from Europe’s heatwave, which fanned drought, wildfires and water shortages.

In Europe extreme heat and arid conditions this summer have led to water scarcity and wildfires in Italy, Spain and Portugal. It is difficult to put an exact figure on losses from those events as their effects, such as production losses after a lack of cooling water, take a while to emerge, Munich Re said. Some of the worst moments of Europe’s heatwave struck in July and will be captured in second-half data.

Floods in Australia were the costliest disaster for the finance industry in the first half, causing insured losses of $3.7bn so far. Parts of Sydney had as much rain in four days as they’d normally see in eight months, Munich Re said. The water levels of some rivers were at their highest in over 100 years.

“Total losses and insured losses from floods in Australia are already higher after six months than they were in the previous record years,” said Ernst Rauch, chief climate scientist at Munich Re.

The US accounted for almost half of overall losses in the first six months and nearly two-thirds of insured losses. A single thunderstorm front that produced tornadoes in early April destroyed assets worth more than $3bn.

The project aims to transform more than 7,000km of the city’s waterways
National
1 month ago
Next Article