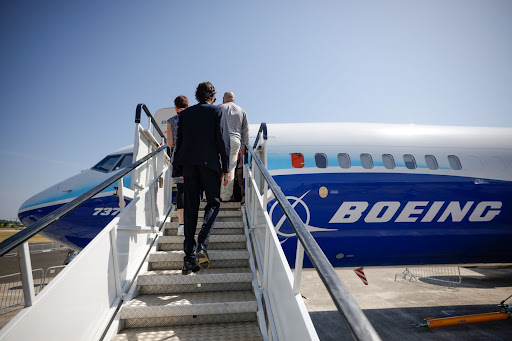 Boeing  generated $81m in cash from its operations during the second quarter, sharply reversing its heavy cash use earlier this year as the plane maker stepped up deliveries of its highly profitable 737 Max jetliners.

The performance outpaced Wall Street’s expectations, with analysts predicting the manufacturing titan would burn through $343m, according to data compiled by Bloomberg. It puts Boeing on track to generate free cash flow on an annual basis for the first time since 2018, Boeing CEO Dave Calhoun told employees in a memo on Wednesday.

“Even as we navigate a difficult environment, we are making progress across key programmes and are beginning to hit significant milestones,” Calhoun said.

The shares rose 3.8% in New York. Boeing tumbled 23% this year through to Tuesday’s close.

Investors are eager for signs the US manufacturer is starting to emerge from the years of losses and operations breakdowns that have eroded its cash stockpile and left it burdened with debt. Boeing faces growing pressure to repair its balance sheet, and questions as to whether it will need to sell equity to pay down debt and eventually fund a new aeroplane.

Boeing still has much work to do before its financial and operational turnaround is complete. Cost overruns on contracts for its Starliner space capsule and MQ-25 aerial refuelling drone led to $240m in accounting charges, the Arlington, Virginia-based company said in a statement.

Boeing’s second-quarter revenue of $16.7bn and 37c core loss per share were both worse than analysts expected. The company’s earnings have missed consensus estimates in all but one quarter since the start of 2021.

The planemaker’s capital strategy is in the spotlight with the company’s cash and investments in marketable securities declining by $900m from the prior quarter to $11.4bn.

Cash remains the company’s most important metric, especially for investors worried their shares may eventually be diluted, said George Ferguson, an analyst with Bloomberg Intelligence. “The noise in the market is whether they are going to have to raise equity. That keeps the stock under pressure,” he said in an interview before the results were announced.

Establishing a steady cadence of Max deliveries is a good first step to generating cash, Ferguson said. Resuming handovers of its 787 Dreamliner wide-bodies, which have been largely halted since late 2020, would also start to unlock billions of dollars tied up in the company’s inventory of undelivered jets.

Calhoun said Boeing’s 787 team “is in the final stages of preparing to restart deliveries.” After that milestone, Boeing plans to gradually increase output of its marquee wide-body jet to a five-jet monthly pace.

Like its global industrial peers, Boeing is grappling with parts and labour shortages that have left suppliers struggling to keep pace. Those pressures, combined with high inflation, have contributed to losses on fixed-price military contracts that the company won by bidding near its costs last decade.

Earnings from operations at Boeing’s defence and space division tumbled 93% to $71m from a year earlier, as the company recorded a $147m charge due to “higher costs to meet certain technical requirements” for the MQ-25 programme. The unit also took a $93m charge in part for its do-over flight of the Starliner capsule earlier in 2022.

The manufacturer is girding for more disruption to its defence division if 2,500 machinists walk off the job in the St Louis factories manufacturing Boeing’s military fighter jets. Boeing is drafting contingency plans to minimise disruption to the US government after workers voted to strike, Calhoun said during an interview on CNBC.

The company’s quarterly commercial profit was depressed by $283m in abnormal production costs stemming from low output for the 787 Dreamliner. However, Boeing didn’t record a similar expense for the 737 Max, whose output reached a 31-jet monthly pace during the quarter.

“We don’t need to close that gap,” Calhoun told CNBC. “We’re in a supply-constrained industry and will be as far as I can see for years, not months. If that’s true, our job is to deliver against our backlog and continue to build that backlog, and that is what’s going on.”