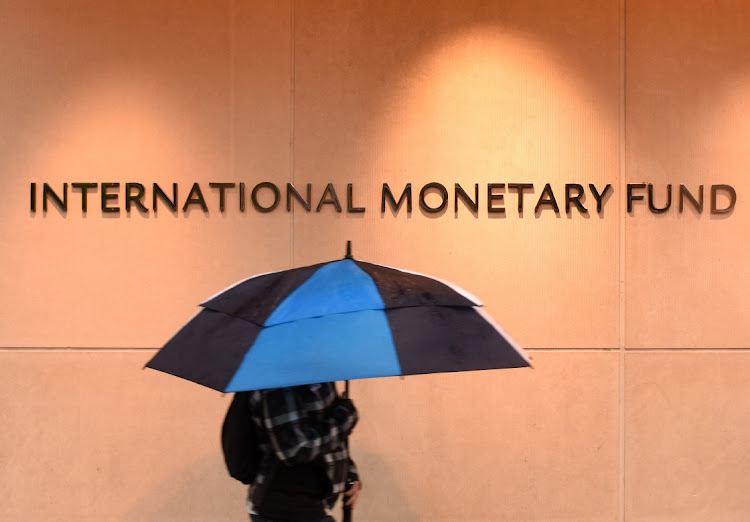 The International Monetary Fund (IMF) on Tuesday cut its global growth outlook for 2022 and 2023, warning that the world economy may soon be on the cusp of an outright recession.

Global economic expansion will probably slow to 3.2% this year, less than the 3.6% forecast by the fund in April and the 4.4% seen in January, the IMF said in an update to its World Economic Outlook released on Tuesday.

The series of interest-rate increases that central banks have unleashed to contain inflation “is expected to bite” in 2023, with global output growth set to slow to 2.9%, it said.

While the crisis lender is still forecasting positive growth, that will do little to quell rising concern of receding expansion or even outright recession in major economies as accelerating price increases eat away at incomes, savings and profits.

“The outlook has darkened significantly since April. The world may soon be teetering on the edge of a global recession, only two years after the last one,” Pierre-Olivier Gourinchas, the IMF’s chief economist, said in a blog accompanying the release of the update.

Consumer prices have consistently climbed more quickly than expected, with the IMF seeing inflation accelerating even further in 2022 as higher food and energy costs couple with lingering supply-and-demand imbalances. It now projects the global consumer price gauge to increase 8.3% this year, which would be the biggest jump since 1996. The April estimate was 7.4%.

The risks the fund outlined in the April edition of the World Economic Outlook are materialising, the fund said. Such dangers include a worsening of the war in Ukraine, escalation of sanctions on Russia, a sharper-than-anticipated slowdown in China, renewed Covid-19 flare-ups and an inflation wave that’s forcing central banks to raise interest rates. 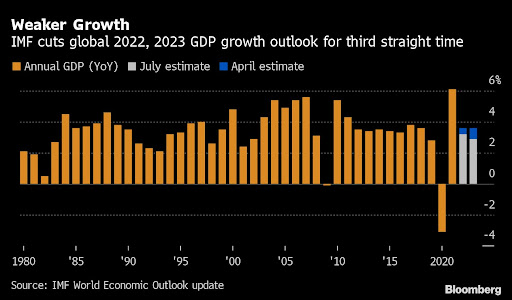 And the risks to the revised outlook “are overwhelmingly tilted to the downside”, it said. Among the plethora of concerns is the potential for “a sudden stop” of European gas imports from Russia due to the war, more persistent inflation and a further escalation of a property crisis in China.

The growth-outlook downgrades were broad, but the projection for US expansion took the biggest hit, with the IMF cutting it by 1.4 percentage points relative to the April estimate to 2.3% because of lower growth earlier this year, reduced household purchasing power and tighter monetary policy.

The forecast for 0.6% growth in the fourth quarter of 2023 on a year-on-year basis “will make it increasingly challenging to avoid a recession”, according to the IMF.

The fund reduced the projection for Chinese expansion by 1.1 percentage points to 3.3%, with the nation’s deepening property bust and mobility restrictions to stem Covid-19 outbreaks disrupting activity and having global spillover effects into stressed supply chains.

Taming inflation through tighter monetary policy should be the priority for officials, the fund said.

This “will inevitably have real economic costs, but delay will only exacerbate them”, it said.

With emerging and developing economies’ debt at multidecade highs, the increase in global borrowing costs and exchange-rate depreciation is making dollar-denominated debt more difficult to service. The World Bank says about 60% of the world’s 75 poorest countries are in or at risk of debt distress, and this is spreading to middle-income countries.

The IMF said it’s placing an “unusually strong emphasis” on downside-risk scenarios in its update.

“Should additional shocks hit the global economy, economic outcomes would be even worse,” it said.