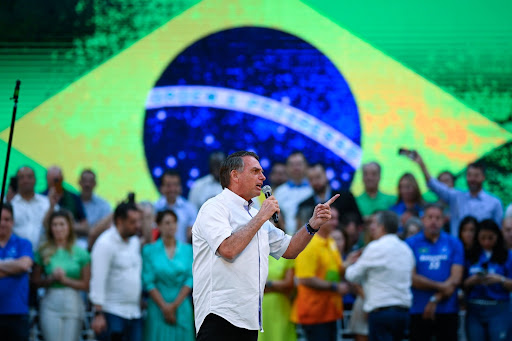 Brazil’s President Jair Bolsonaro officially kicked off his re-election campaign on Sunday, rallying thousands of his followers to Rio de Janeiro after intensifying his attempts to discredit  voting system.

Bolsonaro called on the government faithful to pack an Olympic arena in a working-class neighbourhood for an event billed as “United for the Good of Brazil”. For over an hour, he delivered a speech that catered to his base — embracing traditional family values and attacking his main opponent, former president Luiz Inacio Lula da Silva.

“Today Brazil has a president who believes in God, who defends police and soldiers, who defends families,” he said, after claiming Lula wants to legalise drugs and abortion. “That’s not someone who wants the good of his people.”

But with just over two months before the first round of voting, opinion surveys widely show Brazilians think they’d be better off without Bolsonaro. Frustration over the spiralling cost of living has propelled Lula to lead the race by more than 10 percentage points.

In response, the far-right president has intensified baseless claims of voter fraud and pushed for a flurry of measures to cushion the blow of inflation running at nearly 12%. Earlier in July, Congress enacted a multibillion-dollar aid package proposed by the government that expanded cash assistance, with handouts paid to poor families raised to 600 reais ($109) from 400 reais.

Bolsonaro pledged on Sunday to extend the aid if re-elected. His wife Michelle also spoke at the event as the president sought to increase his appeal among women.

It remains unclear if the tactics will be enough to drum up additional support or restore faith in Bolsonaro’s stewardship of Latin America’s largest economy. Economists are warning of a recession later in 2022 and hunger is rising.

“At this stage, voting is very much crystallised,” said Rodolfo Pinto Costa, director of the polling firm PoderData. “There’s not much room for growth.”

There is also fear at home and abroad that Bolsonaro will mimic his political inspiration, Donald Trump, and contest the election.

Winding lines of Bolsonaro supporters clad in the national colours of green and yellow had already formed outside the Rio arena hours before the president took the stage. Inside, campaign officials whipped up crowds.

While there were thousands in attendance, the arena wasn’t full. The rally had been targeted by anti-Bolsonaro activists who registered false attendees in a bid to make the large arena appear scarcely populated. Campaign officials said they detected as many as 40,000 fake registrations.

Still, Bolsonaro’s loyalists raised their hands in the air and cheered along to political jingles cut in a mix of styles from country music to Christian rock. Among them was Ricardo Lisboa, who took a seven-hour bus ride from the city of Sao Paulo to attend.

“I’m here for my son,” Lisboa said as he entered the building. “We cannot let the country return to the way it was.”

Lisboa, a financial administrator, berated the efforts of activists to empty out the event. “It’s a reflection of how the other side really is: rather than show respect they seek to sabotage. But here we are like family, here we are the majority.”

Like many in attendance, Elizabeth Pecanha brushed off the notion that Bolsonaro was trailing.

“Those polls are from the Left, the bankers, the media,” she said, draped in a Brazilian flag. “The president has the people’s support and the real demonstration of it is in the streets wherever he goes.”

Despite trailing in all major polls, Bolsonaro has ignored the advice of his own advisers to moderate his rhetoric and instead focused on firing up the most fervent of his base.

He once again cast his main challenger, Lula, a leftist two-term former president, as a corrupt leader who is seeking to bring about communist rule. But after a botched handling of the pandemic and the economy fizzling, many have grown tired of Bolsonaro’s government.

While Lula has been vague on his proposals, he has tried to sell an image of a veteran politician who can bring prosperity back to a nation mired in crisis. He left office in 2010 as one of Brazil’s most popular presidents ever, following a commodities boom that produced rapid economic growth and pulled millions out of poverty.

Brazil's former leader, who was freed from jail on a technicality last year, puts focus on Amazon protection, sovereignty and democracy
News
3 months ago

Bolsonaro has questioned Brazil’s e-voting system and made baseless claims of fraud in the 2018 race, stirring concern that he may not accept the ...
World
3 months ago

Tight monetary policy and the combination of fiscal and political risks in an election year should contribute to a significant slowdown in growth in ...
World
6 months ago
Next Article