US crosses the electric-car tipping point for mass adoption

Once 5% of new-car sales go fully electric, everything changes, according to an analysis of the 19 countries that have made the EV pivot 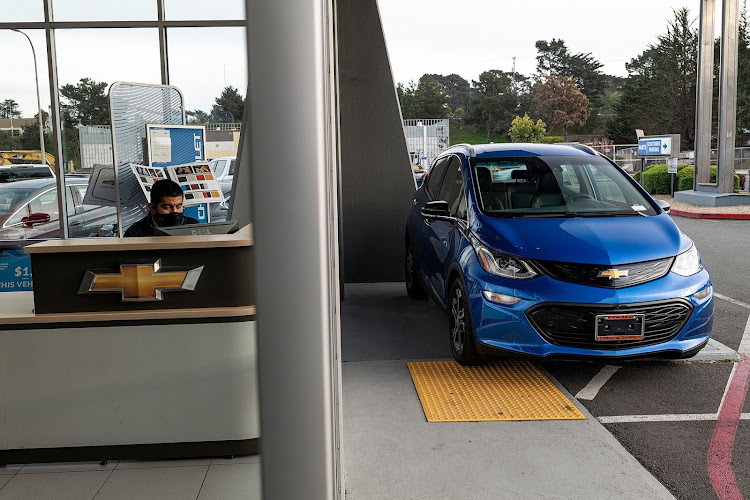 An electric vehicle for sale at a car dealership in  California. Picture: DAVID PAUL MORRIS/BLOOMBERG

Many people of a certain age can recall the first time they held a smartphone. The devices were weird and expensive and novel enough to draw a crowd at parties. Then, less than a decade later, it became unusual not to own one.

That same society-altering shift is happening now with electric vehicles, according to a Bloomberg analysis of adoption rates around the world. The US is the latest country to pass what’s become a critical EV tipping point: 5% of new car sales powered only by electricity. This threshold signals the start of mass EV adoption, the period when technological preferences rapidly flip, according to the analysis.

For the past six months, the US joined Europe and China — collectively the three largest car markets — in moving beyond the 5% tipping point. If the US follows the trend established by 18 countries that came before it, a quarter of new car sales could be electric by the end of 2025. That would be a year or two ahead of most major forecasts.

Most successful new technologies — electricity, television, mobile phones, the internet, even LED light bulbs — follow an S-shaped adoption curve. Sales move at a crawl in the early-adopter phase, then surprisingly quickly once things go mainstream. (The top of the S curve represents the last holdouts who refuse to give up their old flip phones.)

In the case of electric vehicles, 5% seems to be the point when early adopters are overtaken by mainstream demand. Before then, sales tend to be slow and unpredictable. Afterwards, rapidly accelerating demand ensues.

It makes sense that countries around the world would follow similar patterns of EV adoption. Most impediments are universal: there aren’t enough public chargers, the cars are expensive and in limited supply, buyers don’t know much about them. Once the road has been paved for the first 5%, the masses soon follow.

Thus the adoption curve followed by South Korea starting in 2021 ends up looking a lot like the one taken by China in 2018, which is similar to Norway after its first 5% quarter in 2013. The next major car markets approaching the tipping point this year include Canada, Australia and Spain.

A higher bar for hybrids

The analysis above is for vehicles that run on batteries only. Some countries, primarily in Europe, were quicker to adopt plug-in hybrids, which have smaller batteries backed by a gasoline-powered engine. Including those, the world just surpassed 20-million electric vehicles on the road, and that figure will double again by the end of next year, according to a recent report by analysts at BloombergNEF.

Since using a plug-in hybrid doesn’t require the same level of infrastructure or consumer awareness, the early phase of adoption was less consistent. A consistent tipping point for this broader category of EVs wasn’t achieved until 10% of new vehicles had a plug.

The US and China mostly skipped plug-in hybrids and went straight to fully-electric vehicles, and the US hasn’t yet crossed the 10% threshold.

Behind every country that crossed an EV tipping point is a programme of federal incentives and pollution standards. In the US, the Biden administration last year issued an executive order calling for EVs to make up half of new vehicles by 2030 (including plug-in hybrids). According to the tipping-point analysis, it should beat that goal with several years to spare.

Continued growth also depends on the ability of carmakers and their suppliers to increase production fast enough. Volkswagen, Ford and BMW are each targeting 50% or more of their global sales to be fully electric by the end of the decade.

It turns out, carmakers have tipping points, too. Factories must be retooled and supply chains reconfigured. To achieve the most cost savings, the entire vehicle must be redesigned with electrification in mind. In Europe, once 10% of a carmaker’s quarterly sales go electric, the share triples in less than two years.

The chart below doesn’t include Toyota, the biggest carmaker that hasn’t reached the 10% EV threshold in Europe. Toyota’s target of 3.5-million annual EV sales by 2030, as a share of its 10-million annual vehicle sales, is among the least aggressive of the major carmakers. The chart also doesn’t include Tesla, the world’s biggest EV maker, whose sales are entirely electric.

Is the world’s transition to EVs inevitable?

So far, 90% of the world's EV sales have come from the US, China and Europe. That means countries responsible for about a third of global annual auto sales haven’t passed the tipping point. None of the countries in Latin America, Africa or Southeast Asia has made the jump. If they do, it’s uncertain whether global miners will be able to keep up with demand for battery metals.

Still, global sales of electric vehicles tripled in the last two years, according to the International Energy Agency. All of the net growth in global car sales in 2021 came from electric cars, and that’s a trend that BloombergNEF forecasts suggest will continue indefinitely. This year could be the high water mark for vehicles on the road without a plug.

Applying the tipping point analysis to the entire globe, the share of fully electric vehicles worldwide passed the 5% threshold for the first time last year. Including plug-in hybrids, the 10% tipping point will be passed sometime this year. If the trend holds true, accelerating demand can be expected.

Home chargers for electric cars the next big market