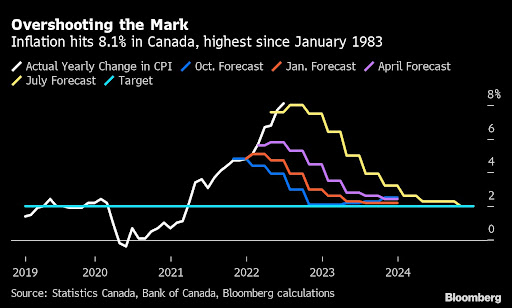 Consumer price inflation accelerated in June to the highest level since January 1983, maintaining pressure on the Bank of Canada to continue delivering aggressive interest rate hikes.

Both numbers were lower than expected, with economists anticipating gains of about 8.4% annually and 0.9% monthly, according to the median estimate in a Bloomberg survey.

The Canadian dollar weakened and bonds rallied. Two-year benchmark Canada yields fell to 3.22% as of 8:43am Ottawa time, down about 6 basis points (bps) from their level immediately before the data release. Ten-year yields slid to 3.026%.

The increase in the annual pace of inflation past the 8% mark will keep the Bank of Canada on its tightening path, though the numbers show some evidence of softening. That could stoke expectations that price pressures may be peaking.

“It will provide some relief” to the Bank of Canada, Charles St-Arnaud, chief economist at Credit Union Central Alberta, said in an interview on BNN Bloomberg Television. “I think they’ll be happy to see that it’s not closer to 8.5%. But it doesn’t mean that it will change their view in terms of what they need to do.” The Bank of Canada’s concern is the breadth of inflation, he added.

Higher gasoline prices were a key contributor to inflation last month, with prices rising 6.2% on the month and 55% on the year. Food and shelter costs, however, are showing signs of slowing. Prices for food were up 0.1% on the month, the slowest increase in a year.

Earlier this month, the Bank of Canada estimated inflation will average about 8% through the third quarter of 2022 before slowing. Swaps trading shows investors expect the central bank to hike its policy interest rate by another 75 bps in September, after a full percentage increase earlier in July.

Adjusting for seasonal factors, the CPI rose 0.6% in June, the slowest pace since January and down from 1.1% in May.

The average of core measures — often seen as a better indicator of underlying price pressures — rose to 5%, a record in data back to 1990, from an upwardly revised 4.93% in May.