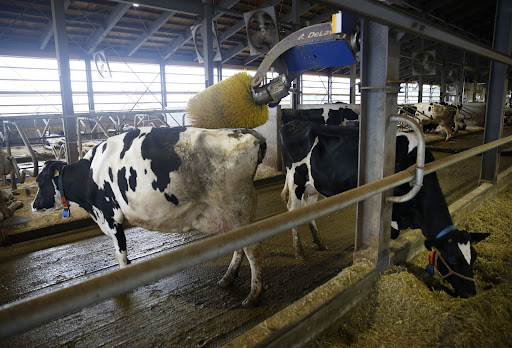 The latest effort to curb methane emissions from cattle will capture the potent greenhouse gas from their manure.
Image: Bloomberg

A Canadian company has teamed up with the renewable energy arm of Japanese property group Toyo to build one of Japan’s biggest plants to convert cow manure into power, the latest effort to fight the potent effects of methane on global warming.

The facility will anaerobically digest about 250 tonnes of cow manure a day and generate about 1.2MW of energy from biogas, enough to power about 2,200 homes a year, according to Anaergia. The firm is designing and installing the plant for Toyo Energy Solution in Kasaoka, a coastal town in southern Japan better known for its seafood and horseshoe crabs.

While Anaergia has built more than 1,700 agricultural waste anaerobic digestion facilities globally, the plant in Kasaoka highlights the increasing focus on mitigating the climate effects of cattle.

Agriculture and livestock are the biggest contributors from human activity of methane, a potent greenhouse gas with 84 times the warming power of carbon dioxide in the short term. From masks that capture methane from bovine burps to seaweed diets that are supposed to limit them, researchers are developing an array of technologies and systems to try to limit emissions from cattle.

Greater climate transparency is helping drive that shift. Monitoring firm GHGSat said in April it detected methane emissions from space for the first time from a cattle herd through its high-resolution satellites.

The Kasaoka project is Anaergia’s second with Toyo after it built a plant in Yabu City that converts farm and food waste into renewable energy.