Heatwaves and drought sear the region, but it still has to burn coal 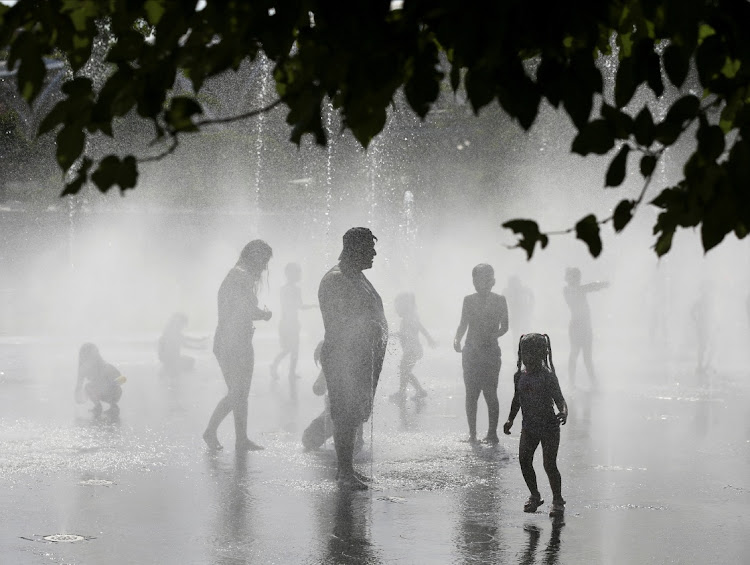 People cool off at a fountain in Madrid Rio Park during the second heatwave of the year in Madrid, Spain.
Image: REUTERS/Isabel Infantes

Southern France was slammed by a heatwave so intense in June that Celine Imart was forced to harvest rapeseed in the middle of the night to avoid searing-hot tractors sparking fires in her fields.

Farmers elsewhere reported crackling dry crops spontaneously catching fire after coming into contact with the heat from harvesters. Record high temperatures brought the earliest-ever heatwave across large sections of France, as well as to Spain and parts of Italy.

For Imart, a 39-year-old sixth-generation farmer near Toulouse, the dry weather so early in the year meant the harvest of durum wheat, used to make pasta, was finished two weeks earlier than usual and yielded 30% below normal.

“From one day to another it passed from too much rain to too dry,” Imart said, adding that the phenomenon accelerated the development of crops. “We see it on our farm — the time of the harvest is earlier and earlier each year, advancing all the time.”

Europe is bracing for a new heatwave with temperatures in parts of France flirting with 40°C  this week and next. In London the thermometer may hit 35°C in the coming days. Seville, in the south of Spain, is expected to touch highs of about 45°C.

Waves of blistering heat and severe droughts are emerging as weather phenomena — made worse by global warming — that will overwhelm large swathes of Europe this summer.

Spain and Portugal are suffering the driest conditions in more than a millennium; Italy’s longest river, the Po, is at its lowest level in 70 years, while sections of the Rhine River, Western Europe’s most important waterway, haven’t been  this low at this time of year in at least 15 years. Crops are wilting and power plants are forced to shut down, threatening an inflation-weary region with a further boost in food and energy prices.

It shows hanging on to the status quo is not an option.

“We have followed a rationale in the fight against climate change which is that we will always find ways to keep going with business as usual and that the global economy doesn’t need to change,” said Olivia Lazard, a visiting scholar at Carnegie Europe focusing on the geopolitics of climate.

“Year 2022 is the year when this myth is debunked because we’re going to face so many compound shocks.”

Europe had begun to concretely address climate change. The continent with the most ambitious green agenda unveiled a plan in July last year to cut planet-warming emissions by 55% from 1990 levels by the end of the decade.

Under the Green Deal, the bloc earmarked at least €1-trillion (about R17-trillion) over 10 years in sustainable investments, allocated a third of its budget for the next half-decade to green projects and asked members to lay out at least 37% of the more than €700bn pandemic recovery package on spending that supports climate goals.

But those ambitions relied on gas piped from Russia to keep economies humming along while waiting for investments in renewables, electric cars and green technologies to cut emissions from heavy industry.

Russia’s war in Ukraine has sent Europe quickly to dirtier fuels. Germany is delaying the retirement of some coal- and oil-fired power plants; the Dutch are lifting a cap on power from coal; Austria is reviving a shuttered coal power station and France is preparing a coal plant as a reserve for the winter.

Several countries are also investing in terminals to import LNG and pipelines to connect them to existing networks — infrastructure that will last decades.

That means Europe will likely have to put in place more stringent emissions restrictions later this decade to make its targets.

Meanwhile, the extreme weather events engulfing large parts of the region have the attention of governments, which are being forced into calamity mode.

Italy this month declared a state of emergency in five northern regions affected by one of the country’s worst droughts. Water levels for the Po, the main source of irrigation for crops, are 80% lower than normal.

The Italian farmers’ association Coldiretti said the first half of this year was the hottest on record, with 45% less rain than normal. The drought will mean reductions of at least a third in the harvest of key crops of rice, corn and forage, with estimated losses  of as much as €3bn, it said.

In the Dolomite mountains in northeastern Italy, record high temperatures this month sent a glacial ice shelf crashing from the top of Marmolada mountain, killing 11 people.

The Iberian Peninsula in south Western Europe — comprising Spain and Portugal — is suffering the driest conditions of the past 1,200 years, according to a study in Nature Geoscience.

The drought is caused by the expansion of a persistent high pressure system over the Atlantic, known as the Azores High, which blocks wet weather fronts. Higher carbon emissions have made such systems larger and more frequent, keeping rain away from the peninsula.

In Spain's southern region of Andalucia,  the Guadalquivir River basin is flowing at 28% of capacity. Water levels in dams along the 660km river are so low that at  Iznájar, site of Andalucia's biggest dam,  neolithic tools and ancient structures such as grain mills dating from Roman times have been exposed.

Cities such as Madrid and Barcelona are creating networks of “climate refuges”, where people can cool off on hot days.

“What we are seeing are the impacts of ongoing climate change,” said Piero Lionello, a professor of atmospheric physics and oceanography at the Universita del Salento in Italy.

“Unless mitigation efforts are very successful in the next few decades, what we are observing now is a very small fraction of what will happen in the future.”

Already, the European Commission has slashed its 2022 soft-wheat crop estimate to 125Mt, down 5Mt from a previous estimate, which will compound the impact of Russia's blockade of Black Sea exports from Ukraine — one of the biggest exporters of wheat, corn and sunflower oil.

What we are seeing are the impacts of ongoing climate change

Scientists say slashing greenhouse gas emissions is the only way to slow the pace of global warming. The window of opportunity to act before things become catastrophic is closing, according to a major report this year by the UN’s Intergovernmental Panel on Climate Change.

“We need to work better with nature, taking an agroecological approach to agriculture and increasing the use of trees into the landscape, which can provide lots of benefits for resilience to drought,” said Delphine Deryng, a lead author of the report. “It takes time and in the short term it is quite challenging economically.”

And while drought is one of climate change’s most complex challenges, not all is lost, said Lionello. Governments can put in place water-saving measures, build reservoirs and desalination plants, improve the efficiency of water usage and recycle it.

“The bad news is that water shortages will be an issue in the future, but the good news is that this is one of the sectors where adaptation can be more successful,” he said.

“We have lots of new technical capabilities, so if we get this right we have the potential for even improving living standards.”

Nearly 240 people died in Portugal between July 7 and July 13 due to the heatwave, the country’s health authority said
World
3 weeks ago
Next Article

SA's just transition must recognise the youth are key

SA's just transition must recognise the youth are key