‘Hotel California’ schemers have been charged 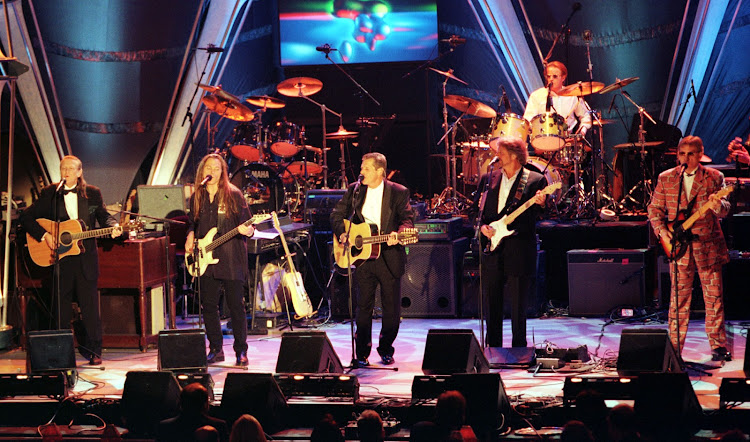 The Eagles perform at the band's induction into the Rock and Roll Hall of Fame. Picture: REUTERS

Three men have been charged in New York with conspiring to sell about 100 stolen pages of handwritten notes and lyrics from the Eagles album Hotel California.

Glenn Horowitz, Craig Inciardi and Edward Kosinski knew the manuscripts had been stolen from Eagles co-leader Don Henley in the 1970s, Manhattan district attorney Alvin Bragg said, but they conspired to manufacture fake provenance for the documents and lied to auction houses, potential buyers and law enforcement agencies.

Released in 1976, Hotel California is one of the best-selling albums. According to Bragg, the notes held by the three men included handwritten lyrics to the album’s title track as well as for the hits Life in the Fast Lane and New Kid In Town. The district attorney said the manuscripts were worth about $1m in total.

“New York is a world-class hub for art and culture, and those who deal cultural artefacts must scrupulously follow the law,” Bragg said. “There is no room for those who would seek to ignore the basic expectations of fair dealing and undermine the public’s confidence and trust in our cultural trade.”

The manuscripts were originally stolen in the late 1970s by an author who had been hired to write a biography of the Eagles, according to Bragg. Prosecutors allege the biographer sold the notes to Horowitz, a rare books dealer, in 2005. Horowitz then allegedly sold them to Inciardi and Kosinski, whose own attempts to sell the manuscripts caught Henley’s attention.

When the singer filed police reports and told the men that the materials were stolen, they allegedly responded by engaging “in a years-long campaign to prevent Henley from recovering the manuscripts”, according to Bragg’s statement. This allegedly included creating a false statement of provenance saying the manuscripts originated with Eagles co-leader Glenn Frey, who died in 2016.

“Frey, alas, is dead and identifying him as the source would make this go away once and for all,” Horowitz allegedly wrote in an email included in Bragg’s statement.

Manuscripts including lyrics for classic songs have sold for millions of dollars in recent years. Bob Dylan’s original manuscript for Like a Rolling Stone sold for more than $2m in 2014 and one for Don McLean’s American Pie fetched $1.2m in 2015.

Podcast could cause death to those who believe the false news spread by it, singer says
News
6 months ago

After the success of his latest album last year, it seems Bob Dylan can do no wrong as he celebrates his 80th birthday
Life
1 year ago

BOOK REVIEW: A look back on Beatlemania