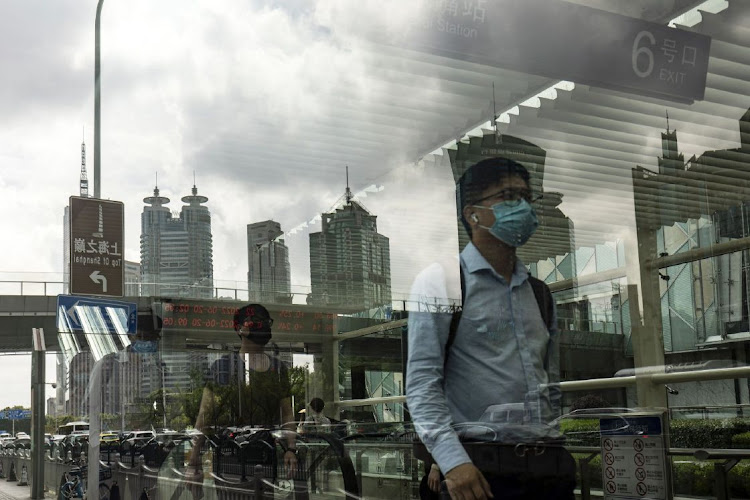 The city reported 59 new infections for Monday, the fourth day in a row case numbers have held above 50. The sharp rise from single digits about a week ago follows the detection of the more contagious BA.5 sub-strain of the Omicron variant, which has triggered two additional rounds of mass testing between Tuesday and Thursday this week across nine of the financial hub’s 16 districts, as well as other areas where cases have been found.

China’s strict Covid-19-Zero approach is once again being tested as outbreaks flare across the country amid the arrival of a sub-variant that has fuelled rising caseloads elsewhere. Already, close to 30-million people nationwide are under some form of movement restriction to quell transmission, but authorities have  steered clear of strict lockdowns in key economic regions so far.

The nation reported 347 cases for Monday. A cluster has emerged in Henan province, which recorded 73 cases. Just one of those infections led Wugang, a city in the steelmaking region and home to Wuyang Iron & Steel, to lock down for three days. Guangdong province — which borders Hong Kong and Macau — posted 42 cases.

China’s benchmark CSI 300 Index was up around 0.2% in early Tuesday trading after slumping 1.7% on Monday amid fears of another lockdown in Shanghai.

For residents of Shanghai, where officials declared victory over the virus just last month, multiple rounds of testing and the lockdown of individual residential compounds is reviving difficult memories. Draconian measures kept the population sealed inside their homes for much of April and May, struggling to reliably access food and medical care, exacting an enormous economic toll and stirring some of the strongest antigovernment sentiment in years.

With case numbers rising once more and officials denying speculation a lockdown is coming, the likelihood of a return to the strictest tenets of Covid-19 Zero — a strategy that has left China isolated from the rest of the post-pandemic world — is a hot topic of discussion across the city of 25-million.

“Whenever we saw some hope of a business rebound in June, Covid-19 flare-ups emerged. It’s like a curse,” said a Shanghai cab driver surnamed Cui. “We are losing money everyday. I don’t think I can hang in there for too long.”

Cui, who didn’t want to provide his full name for fear of repercussions, said even with the easing of Shanghai’s lockdown at the start of June, business was just 30% of normal levels that month, not enough to cover the cost of renting his taxi. “I wonder if citizens in the entire country are all starved to death, how will those policymakers feel,” he said.

Maggie Xu, an architect, is responding to the rising case numbers by getting organised.

Xu has ordered 8kg of rice, 30 rolls of toilet paper, a large bottle of cooking oil and bags of salt and sugar. During the last lockdown, Xu organised group purchases for residents at her compound in Shanghai’s Pudong area — a key method of getting groceries as official deliveries dried up — and she’s already received requests from neighbours in the last few days to lock in some orders.

“While rational thinking tells me it’s unlikely we’ll have another citywide lockdown as that’ll definitely cause social turmoil, fear is spreading among people including myself,” she said. “I hate the uncertainties we are facing every day. We don’t know whether we’ll be locked at home tomorrow or sent to quarantine hotels. We just can’t make any plans.”

China sends all positive Covid-19 cases and their close contacts to government-run isolation facilities, a key tenet of a strategy honed as early as the original Wuhan outbreak. But with the rest of the world moving on from the pandemic, China has become an outlier with its ongoing, hard-core antivirus methods, with President Xi Jinping repudiating what he calls the “lying flat” approach of the West.

Lockdown reality has already hit some parts of Shanghai, with authorities sealing off buildings when cases, or close contacts of someone who tests positive, are detected.

An apartment block in eastern Shanghai was notified by authorities on the evening of July 10 that it was going to be locked down after one resident tested positive during a business trip outside the city. The order sparked an outcry, according to one of the residents, with people saying it would disrupt students preparing to sit high school entrance exams.

People also questioned the logic of locking down the entire compound, pointing out that the positive case had been out of the residential complex since July 8, and that the compound’s  residents had all been testing negative for two days.

A housing complex in central Shanghai that’s home to more than 4,000 people has been locked down since July 7 after one case was found. Residents living in the same building as the infected person have been confined to their apartments for a week, while everyone else has been barred from leaving the compound. The lockdown will be extended if four rounds of PCR testing find further cases.

When the lockdown was announced on a WeChat room for residents, some reacted with anger and disbelief.

“Enough is enough,” one post read. “We made enough ridiculous moves in the last four months.”

“The Covid-19 control policy is being over-implemented on the ground. Who cares about our human rights?” asked another neighbour.

India set to surpass China as world’s most populous country

China tries to mute celebrations after murder of Abe Shinzo

As many as 487 rivers have exceeded their flood warning levels this year and more than 1.2-million people have been evacuated
World
1 month ago
Next Article