Attention will be on consumer demand, inflation, the strong dollar and supply chain woes 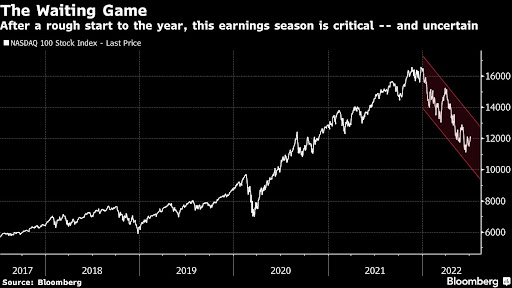 With technology stocks on track for their biggest annual decline on record, the earnings season has a lot riding on it. Picture: BLOOMBERG

With technology stocks on track for their biggest annual decline on record, the earnings season has a lot riding on it.

A tumultuous first half wiped out $5.6-trillion in market value from the Nasdaq 100 index, with interest rate hikes hitting stocks valued on future earnings, inflation driving up costs and the threat of recession weighing on sentiment. At the same time, earnings estimate cuts by analysts have been lagging behind, leaving room for big surprises and dramatic post-earnings moves.

Traders are bracing for price swings of anywhere from 4% to 13% in the Faang cohort (Facebook, Amazon, Apple, Netflix and Alphabet) after they report second-quarter results, according to data compiled by Bloomberg. The five megacaps account for about 16% of the S&P 500 index’s daily performance.

Among factors investors will focus on are company comments on consumer demand, the impact of inflation on margins, the hit from a strong dollar and supply chain woes.

“There will be different dynamics at play, depending on the sector. Anything consumer related is likely to be very challenged,” said Aaron Dunn, a portfolio manager at Eaton Vance Management. “Pricing is another major question. If you have strong pricing power, your trough valuation will be better in this environment.”

A 26% sell-off in the tech-heavy Nasdaq 100 index this year has lowered stock valuations, but apparent bargains may be a mirage if poor results prompt analysts to slash earnings forecasts.

Earnings estimates have started to come down for companies, including Amazon and Alphabet, but maybe not enough, according to Dunn. “We’re going to need ... recalibration,” he said, referring to earnings outlooks this season.

Wall Street expects tech earnings to rise almost 13% this year — a consensus that hasn’t changed much in recent months despite growing economic headwinds. If estimates fall dramatically, stocks will look expensive, underlining their downside potential in a slowdown.

Investors parsing results for clues on consumer and enterprise demand have so far received mixed signals. Micron Technology’s disappointing outlook points to weaker trends for phones and computers, while a beat from Samsung Electronics was more reassuring.

The hardware group has “the most downside risk” if there’s a bigger downturn in demand, Goldman Sachs analyst Rod Hall wrote in a report last week, picking out Apple and Hewlett Packard Enterprise as those most at risk.

Beyond hardware, investors are bracing for a chip cycle downturn and expect a softening in the market for online advertising, the primary source of revenue for companies such as Meta Platforms.

Costs are soaring while intermittent lockdowns in China are worsening an already strained supply chain. Investors will be closely watching how much of these pricing pressures companies can pass on to customers, and the impact on margins.

Bloomberg Intelligence data indicates that operating margins will be about 31% this year, a forecast that remained steady through this year but that may come down after companies start to report.

The surging US dollar has already been flagged as a big issue for tech this quarter, with Microsoft and Salesforce both citing currency in recent guidance cuts.

Bloomberg Intelligence analyst Anurag Rana sees this as a “recurring theme” for large software companies, as most generate over one-third of their sales outside the US.

And it’s also being felt by hardware firms, with Apple recently raising the price of iPhones and iPads in Japan to account for the yen’s drop against the dollar.

The Federal Reserve’s battle against inflation and the accompanying surge in treasury yields have weighed heavily on technology stocks this year. Its next interest rate decision will be on July 27, just as the megacap earnings season gets into full swing.

Any surprise from the Fed has the potential to roil stocks. Most on Wall Street expect the committee to hike its benchmark rate by 75 basis points, though there has been speculation that the recent decline in oil and other commodity prices could give the Fed more leeway — potentially good news for tech stocks.