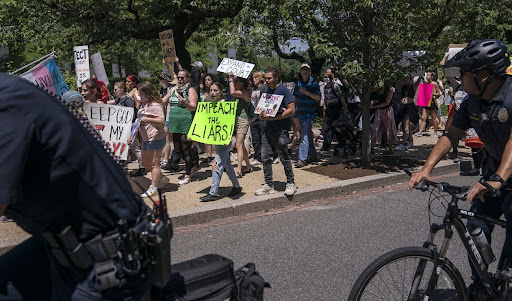 Connor Speed never imagined he would be asking for a vasectomy at the age of 23, but after the US supreme court’s decision to overturn Roe vs Wade, he decided to take the plunge.

He is frustrated by what he sees as a loss of rights for the women in his life; he also wants to avoid unwanted pregnancies.

“Unfortunately my fiancée and my daughter now don’t have the right to choose what they want to do with their body, and I do, so I made this choice,” said Speed, who scheduled the procedure in his home state of Missouri five days after the ruling. By the time he undergoes the planned procedure in October, he will have turned 24.

The court’s reversal of the 1973 landmark decision protecting the federal right to abortion has sent shock waves through the medical, legal and advocacy communities. Under pressure to respond, the White House said President Joe Biden signed an executive order on Friday intended to preserve access to the procedure.

Meanwhile, couples have been forced to reconsider how they will safeguard against unwanted pregnancies. Hundreds of men are rushing to book sterilisation procedures after the June 24 ruling.

In Ohio, where abortions are now prohibited after six weeks into pregnancy, the Cleveland Clinic went from lining up three or four vasectomies a day to 90.

In Ohio, where abortions are now prohibited after six weeks into pregnancy, the Cleveland Clinic went from lining up three or four vasectomies a day to 90. Des Moines, Iowa, urologist Esgar Guarín said he typically performs 40 to 50 vasectomies a month; last weekend alone 20 men registered. Koushik Shaw of the Austin Urology Institute in Texas said his office received about 70 calls within the hour of the ruling.

Many men who had been considering a vasectomy say the verdict was the last straw, according to Tampa, Florida, urologist Doug Stein. Weekly requests for the procedure at his practice have nearly tripled to about 150.

“They want to remain pregnancy-free, because now you cannot reverse a pregnancy as easily as you could before,” he said.

In a vasectomy, doctors sever the tubes that carry sperm, preventing it from mixing with semen. Dependence on it is not uncommon: in a Centers for Disease Control and Prevention survey published in 2020, 5.6% of women cited vasectomy as their contraceptive approach, compared with 14% using birth control pills.

While vasectomies are often reversible, success rates range from 30% to 90%. Most women’s tubal ligation procedures, another surgical form of pregnancy prevention, cannot be reversed and are far more dangerous than male sterilisation.

The order directs the government's health department to expand access to "medication abortion", among others
World
1 month ago

“Every single year in this country alone, 25 to 30 women die from getting their tubes tied,” said Marc Goldstein, a Weill Cornell Medicine urologist. In contrast, research published in the New England Journal of Medicine in 1992 found that, among men who were cancer-free at the start of the study, vasectomy “was associated with reductions in mortality from all causes.”

Goldstein said he has seen an unusual increase among vasectomies in men who are younger and in childless couples since the ruling. That may also reflect a link between vasectomies and financial dread that has been noted back as far as the Great Depression, when procedures spiked while reversals dropped, he said. US consumer confidence has fallen to its lowest point since July 2020, according to the Ipsos-Forbes Advisor US Consumer Confidence Tracker.

“Whenever we see a downturn in the economy, more people think about having fewer children,” said Philip Werthman, a urologist at the Centre for Male Reproductive Medicine & Vasectomy Reversal in Los Angeles. Whether those trends last remains to be seen.

“My initial response is that part of this is reactionary,” said Stein, the Tampa urologist. Future legislation and court activity are likely to play an important role, he said.

While contraception itself is unaffected by the court’s June decision, justice Clarence Thomas suggested the group reconsider that issue, among many other rights-based questions. As those uncertainties mount, Speed said his choice to get a vasectomy has eased a lot of his anxieties about family planning.

“I don’t regret my decision,” he said. “I’m eager for it, I’m excited and hopefully it’s not just a decision made in vain.”

Google will delete location data showing when users visit an abortion clinic out of concern that a digital trail could inform the police if a woman ...
Companies
1 month ago

LinkedIn abortion stories highlight the connectedness of work and life

‘I think the most conservative justices dislike much of modern US law and are actively changing it,’ Prof Douglas Laycock says
World
1 month ago
Next Article

So much TV, so few Emmy chances

So much TV, so few Emmy chances