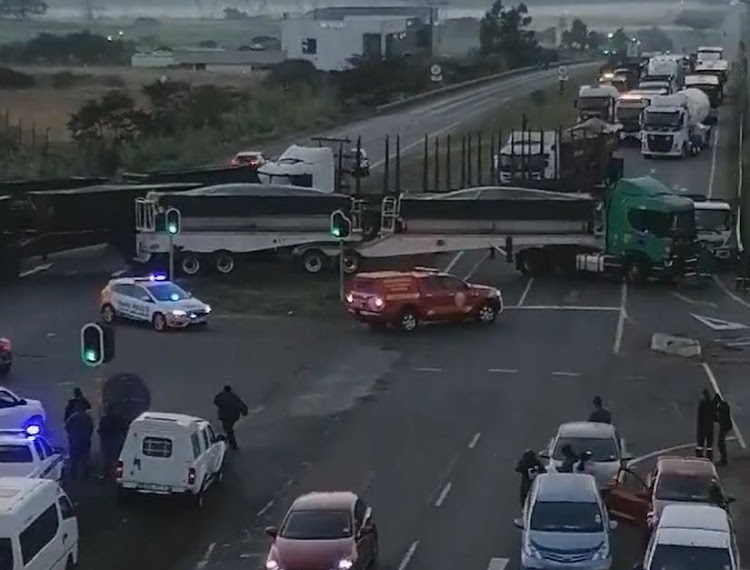 The R34 between Empangeni and Richards Bay iin KwaZulu-Natal is closed due to protest action. Picture: SCREENGRAB VIA TWITTER/ RIOT&ATTACK INFO SA

Protests are building in Africa over surging fuel costs that have governments scrambling over how to respond.

Demonstrators blocked a key supply route in SA this week, tying up the delivery of commodities, over an increase in the regulated pump price. That followed a protest in Mozambique, the world’s third-poorest country, where bus drivers paralysed the capital Maputo after diesel prices jumped.

The effect of fuel shortages throughout Africa in the wake of Russia’s invasion of Ukraine is especially pronounced for populations whose transportation costs account for a disproportionately high percentage of monthly budgets. Suppliers have blamed richer nations for paying a premium for cargoes, while soaring margins benefit the refining businesses of companies such as Shell .

“Transport price inflation feeds directly into food inflation — so keeping it under control has been an imperative, even when fiscal resources have (in some instances) come under greater strain,” Razia Khan, Standard Chartered Bank’s head of research for Africa and the Middle East, said in reply to emailed questions.

One person died during protests against rising fuel prices in Guinea last month, while butane distributors in Morocco held a two-day strike as diesel costs surged. The World Bank took the unusual step of subsidising bus passengers in Mozambique to mitigate the crisis, and in neighbouring Eswatini the government increased fuel prices by more than 10% after shortages. Ethiopian motorists have had to wait in queues as long as eight hours to refuel. 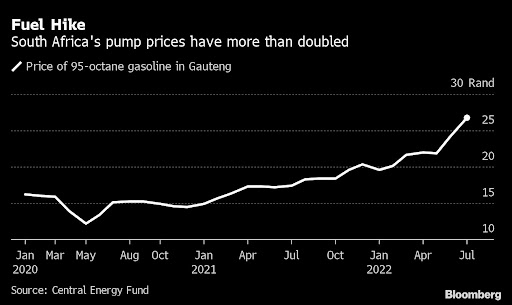 Protests are building in Africa over surging fuel costs that have governments scrambling over how to respond. Picture: BLOOMBERG

In Kenya and Nigeria, both heading to elections in the coming months, the governments are burdened with costly fuel subsidies, as they struggle to finance gaping budget deficits. Ghanaian President Nana Akufo-Addo is now seeking a bailout from the International Monetary Fund after protests over issues including rising fuel prices.

“Governments across Sub-Saharan Africa are always wary of pressure on urban electorates especially, who tend to be more politically mobilised,” Khan said.

Though the continent includes a number of significant producers of oil, there is limited capacity to refine it into fuel for cars, trucks and planes. That means countries need dollars to buy imported diesel and gasoline.

Currency weakness resulting from rising interest rates in rich countries is worsening matters. The currencies of Ghana, Nigeria and Kenya all dropped to record lows against the dollar this week and will continue to depreciate, AZA Finance, a currency broker, said in a note to clients Thursday.