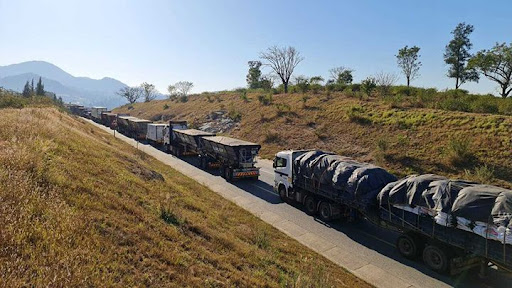 Trucks heading for Mozambique backed up on the N4 highway outside Mbombela on July 6 2022. Picture: BLOOMBERG/MATTHEW HILL

Protesters blocked roads, including a highway linking SA to Mozambique with trucks, on Wednesday morning in protest at fuel prices rising to a record high.

The road between Mbombela, 350km east of Johannesburg, and White River has been obstructed by parked trucks, as is the N4 highway connecting the city to the border with Mozambique and the port of Maputo, Callum MacPherson, regional operations manager at Hi-Tech Security Nelspruit, said by phone. There is also a group of protesters moving between the blockades, he said.

Petrol and diesel prices reached an all-time high Wednesday on rising crude oil costs and as the government trimmed a temporary reduction in a fuel levy. Fuel has a weighting of almost 5% in SA’s consumer price basket and the increases will place further pressure on household finances and inflation.

Police in Mbombela are trying to remove the trucks after drivers parked their vehicles and left with the keys, SAPS provincial spokesperson Selvy Mohlala, said by phone. Police are trying to redirect traffic to areas where there are no protests, he said.

The protests follow a strike by bus drivers in Maputo, Mozambique’s capital, on Monday after diesel prices were increased by 11% and petrol by 4.4%. The action ended after the government pledged to subsidise some fares.

KHAYA SITHOLE: Trying to solve the problem at the pumps is a taxing business