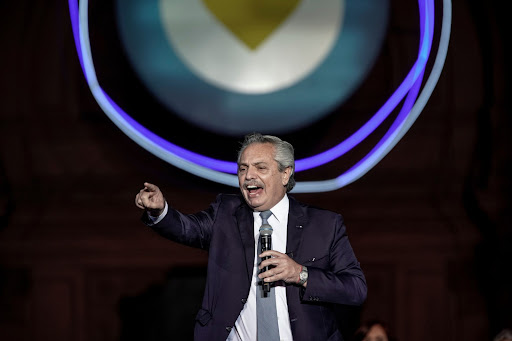 Argentina President Alberto Fernandez tapped leftist economist Silvina Batakis as the country’s new economy minister after her predecessor’s sudden resignation deepened a political crisis that has been hurting its finances and markets.

Batakis, a low-profile policymaker close to the more heterodox wing of the ruling coalition, inherits a long list of economic challenges, including annual inflation over 60%, and the government’s $44bn programme with the International Monetary Fund (IMF), which just passed its first revision.

The announcement capped more than a day of uncertainty and political negotiations sparked by the sudden resignation of Martin Guzman on Saturday after two-and-half years in the job. Batakis, 53, didn’t respond to a request for comment late Sunday.

The second woman to serve as the nation’s economic chief, Batakis was the economy minister of Buenos Aires province, the largest in the country, from 2011 to 2015 under then-governor Daniel Scioli, who recently became production minister. She was serving in a second-tier role in the nation’s interior ministry.

The appointment was made after Fernandez met for hours with Lower House leader Sergio Massa on Sunday to discuss a replacement. Vice-President Cristina Fernandez de Kirchner, who is publicly critical of the president and his economic team, spoke to him on Sunday evening by telephone, local media reported.

“Batakis’s appointment seems to signal that the balance of power has tilted to the Kirchnerist side,” Diego Pereira, an economist at JPMorgan Chase, wrote in a note to clients. “We would expect a more expansive fiscal stance, and potentially a renegotiation of the IMF programme.”

It remained unclear if Fernandez would make other cabinet changes. Central Bank chief Miguel Pesce told Bloomberg News he will stay in his role.

Markets will be watching for clues on Batakis’s economic agenda, the IMF programme and how she plans to navigate a divided ruling coalition that ended Guzman’s tenure.

The nation’s bond prices remain in distressed territory, just above 20c on the dollar, and the country’s parallel exchange rate — which indicates local confidence amid capital controls — slumped to a record low of 252 pesos per dollar last week.

The overseas bonds edged slightly higher overnight, with euro-denominated notes due 2035 inching up 0.1c to 20c on the euro, as of 8.55am local time. US markets are closed for the fourth of July holiday.

“Batakis will implement a heterodox agenda,” Marcos Buscaglia, founder of Buenos Aires-based consultancy Alberdi Partners, wrote in a note. “She will tighten FX controls while at the same time she is likely to rein on public spending. She has repeatedly voiced her favourable view on export taxes so we do not rule out her pushing for legislation to raise export taxes.”

Argentina is battling inflation seen at nearly 73% by the end of 2022, with almost 40% of the population living in poverty and the economy forecast to enter a recession.

The central bank has razor thin cash reserves that it’s struggling to build up amid low credibility and high prices on energy imports and the country’s bonds trade in distressed territory.