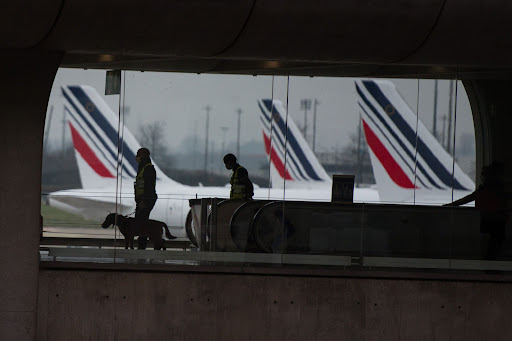 The chaos that has plagued European travel for weeks is coalescing in France as staff at Paris Charles de Gaulle airport strike for the second day in a row Friday and a country-wide rail walkout looms. Picture: BLOOMBERG

The chaos that has plagued European travel for weeks is coalescing in France as staff at Paris Charles de Gaulle airport strike for the second day in a row Friday and a countrywide rail walkout looms.

France’s aviation authority ordered the scrapping of 17% of flights between 7am and 2pm  after pay talks between unions and airport operator Aeroports de Paris failed to reach a wage deal. Air France, the hub’s biggest carrier, cancelled 64 flights, affecting about 10% of short and medium-haul services.

Ryanair workers in Spain were separately set to walk out for a second weekend, while staff at easyJet bases there are planning the first of a series of three-day strikes.

Airports across Europe are suffering disruption, with hubs in London, Amsterdam and Frankfurt scrapping swathes of flights amid a labour shortage and workers elsewhere walking out as they seek higher pay in the face of spiralling inflation. The US has also been hit, with Delta Air Lines CEO on Thursday apologising to customers for an “unacceptable” level of cancelled and delayed flights.

French unions and airport management have been locked in negotiations over wages and working conditions, as inflation quickened to the fastest since the euro was introduced. The next round of talks is scheduled for Friday afternoon, operator ADP said in a statement late on Thursday.

The fact that discussions are continuing is a “positive sign,” a representative of the CFDT union said by phone, while adding that without an agreement some categories of workers are calling for the walkout to be extended through the weekend and even to every weekend this summer.

easyJet said passengers travelling to and from Barcelona, Malaga and Palma should check the status of their flights amid planned action by the Spanish USO-STA cabin crew union.

“Though this is outside our control, we would like to apologise to all our customers for any inconvenience caused and would like to reassure them we are doing all possible to minimise any disruption as a result of the strike actions,” the carrier said.

Ryanair crews have announced six days of strikes in Spain, with the second due to end Saturday. The Irish company has said that last weekend’s Spanish action caused few problems, though there was some impact from a walkout in Belgium.

Aer Lingus, the Irish unit of IAG SA, cancelled 10 flights Friday amid a surge in coronavirus cases, according to broadcaster RTE.

ADP workers staged their first strike on June 9, when disruption spilled over to Paris’s second airport, Orly. Firefighters then walked out on Thursday and are continuing their action on Friday, joined by a range of other employees including security and refuelling personnel.

A protest march around the hub’s terminals will likely disrupt access, the airport operator warned, urging passengers to use rail and subway networks to get to their flights.

While ADP and subcontractors are trying to hire thousands of workers, neither the hub operator nor Air France have announced sweeping flight reductions for the busy summer season like Lufthansa , KLM and British Airways.