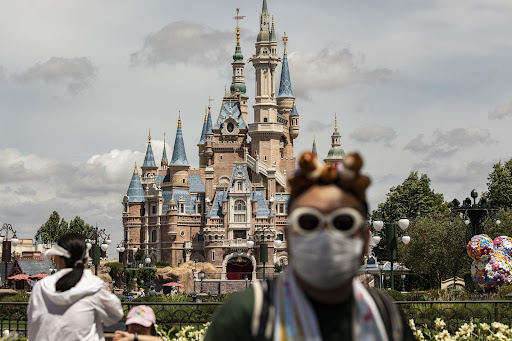 Visitors are flocking back to Shanghai Disneyland. Picture: BLOOMBERG/QILAI SHEN

After 101 days, Shanghai residents can once again enter the happiest place on Earth, but it’s not easy.

The thousands of people queuing to get into what is one of Walt Disney’s most lucrative theme parks had to produce a negative Covid-19 test taken within the past three days, even the youngest guests. That result had to be reflected on their digital health apps, which were carefully scanned by Disney staff as they entered. Everyone was masked in the 31°C heat, in line with China’s nationwide mandate.

Still, the magic of Disney was a welcome relief for guests at the resort in Shanghai, which emerged from a lockdown of its 25-million residents earlier in June after its worst Covid-19 outbreak of the pandemic. The stringent measures including the closing of Disney in March worked, allowing the financial hub to get back to zero new daily cases earlier this week and leaving locals eager for adventure.

“I’ve been missing Disney in the past three months when it was closed, so I rushed here today,” said one annual pass holder, a high school student with the surname of Chen. “Everyone had a hard time during the lockdown. I think we are good to resume dine-in and open up as long as we keep a distance among each other.”

The lengths visitors have to go through and the somewhat sparse crowds underscore how out of step China is with the rest of the world, where a trip to a Disney park in the US or even Europe feels like a return to pre-pandemic days. While most places are now living with the virus and dispensing with restrictions, China continues to pursue a zero-tolerance policy aimed at preventing the disease that led to more than 6.3-million deaths worldwide.

The experience at Shanghai Disneyland diverges sharply from the company’s other operations around the world, particularly at the flagship venues in Florida and California, where virus control measures are few and far between and visitors crowd tightly together to watch the hallmark parades. Vaccinations and negative test results aren’t required, and Disney dropped mask requirements in February.

Meanwhile in Shanghai, it was the second reopening for the 388ha theme park, which also closed in January 2020 after the virus first started circulating. The repetition is a theme across the country, where mitigation measures including limited lockdowns and travel restrictions are quickly imposed and then lifted in time with cyclical flare-ups.

While Disney shares have fallen more than 45% in the past year, theme parks have performed strongly as guests returned in droves in most parts of the world. The park closures in Shanghai and Hong Kong in the northern hemisphere spring will bite, however, with the company warning they could crimp operating income in the current quarter by as much as $350m.

Groups of diehard fans converged during the reopening of the Shanghai park, a joint venture between Disney and Shanghai Shendi Group, a local state-run consortium that owns 57% of the operation. One group of 28 young people gathered together, joyfully celebrating their return.

“We are home!” the crew shouted, holding aloft their plush Disney toys. “The last time we were here was the day before it was closed.”