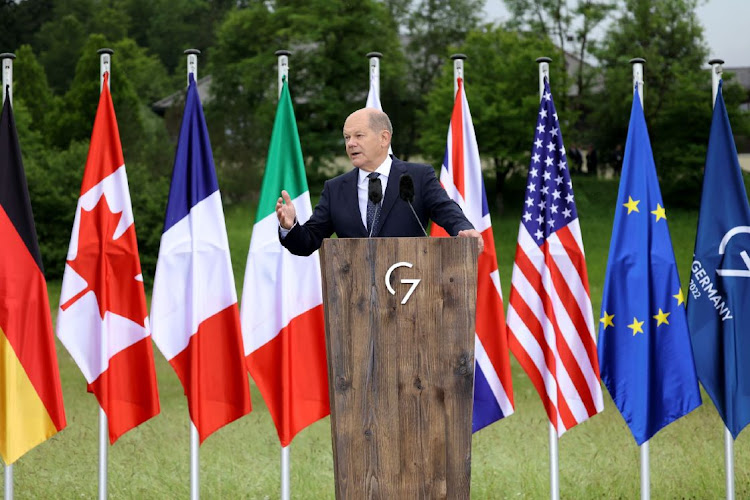 German Chancellor Olaf Scholz during his closing news conference on the final day of the Group of Seven leaders summit at the Schloss Elmau luxury hotel in Elmau, Germany, on June 28 2022. Picture: BLOOMBERG/LIESA JOHANNSSEN-KOPPITZ

Group of Seven (G7) nations have agreed to stick by Ukraine to the bitter end and ratchet up the cost to Russia of its aggression, while leaving much of the detail of how to do so unresolved.

At the conclusion of a G7 summit in Germany, leaders stressed their “unwavering commitment” to the government and people of Ukraine, and made clear their determination to make Vladimir Putin pay for his invasion.

“We will continue to impose severe and immediate economic costs on President Putin’s regime for its unjustifiable war of aggression against Ukraine,” the G7 said in its final statement released on Tuesday.

After three days of deliberations in the Bavarian Alps that were dominated by the war and its global fallout, the leaders pledged to step up efforts on global energy and food security, and to stabilise economies still recovering from the Covid-19 pandemic. Chancellor Olaf Scholz called it “an important summit in extraordinary times”.

But the means of tackling their shared challenges, including a proposed cap on Russia oil prices, remain largely aspirational.

There were strong words of condemnation for Moscow compounding food insecurity, and an additional $4.5bn was announced for those most at risk of hunger and malnutrition. Yet leaders were able only to “reiterate our urgent call upon Russia” to end its blockade of Ukraine’s Black Sea grain ports, which is at the root of the problem.

Charitable organisation Oxfam said the conclusion is a failure that “will leave millions to starve”.

India was one of several partner nations invited to the summit, but there was little sign of Prime Minister Narendra Modi changing his stance to criticise the Kremlin for launching war on its neighbour, or of him putting a halt to Indian purchases of cheap Russian oil.

While expressing concern about the burden of energy price increases and energy market instability, G7 nations agreed only to “explore additional measures to reduce price surges and prevent further impacts on our economies and societies”.

That included a plea to “encourage producer countries to increase their production” of oil, and plans to “seek to develop solutions that meet our objectives of reducing Russian revenues from hydrocarbons”.

On the oil cap, a proposal advanced by Italian Prime Minister Mario Draghi and taken up by US treasury secretary Janet Yellen, leaders agreed to “consider a range of approaches”. They include “options for a possible comprehensive prohibition of all services which enable transportation of Russian seaborne crude oil and petroleum products globally, unless the oil is purchased at or below a price to be agreed in consultation with international partners”, according to the closing statement.

French President Emmanuel Macron hailed the oil cap as a good idea and advocated a cap on Russian gas, too, but said the challenge of implementing it is technical. Ministers were not instructed to flesh it out so much as told “to continue to discuss these measures urgently”. Yellen welcomed the conclusions as a “significant step” regardless, adding that the US will work with allies to advance the efforts.

On gas, G7 leaders acknowledged their own vulnerabilities  exposed by the war and Europe’s rush to find alternatives to Russian supplies. Most notably it includes summit host Germany, whose government has warned of the real risk of shortages in Europe’s biggest economy and a Lehman-like domino effect.

So the leaders stressed the role of increased deliveries of liquefied natural gas, adding they “acknowledge that investment in this sector is necessary in response to the current crisis”.

That’s a reversal of an agreement affirmed as recently as May to stop funding fossil fuel projects overseas. At the same time, leaders committed to stick with the goal of limiting global warming to 1.5°C, raising the question of how realistic holding to that target will prove to be.

“In these exceptional circumstances, publicly supported investment in the gas sector can be appropriate as a temporary response, subject to clearly defined national circumstances, and if implemented in a manner consistent with our climate objectives,” the leaders said.

With war in Europe, inflation rampant worldwide, an energy crisis and the pandemic still under way, the summit took place over three days rather than the usual two. US President Joe Biden was notably subdued during the public proceedings, holding few one-on-one meetings and skipping the usual closing remarks to the media.

While Russia’s war on Ukraine dominated, G7 leaders had an eye on the next major challenge, with a section of their communique addressed to an increasingly assertive China. That is also a topic for those leaders heading to Madrid for a Nato summit.

There is “no legal basis for China’s expansive maritime claims in the South China Sea”, they said, reminding Beijing of the need to uphold its obligations under international law and to “abstain from threats, coercion, intimidation measures or use of force”.

They called on China to respect its commitments to democracy in Hong Kong, referred to Beijing’s “non-transparent and market-distorting interventions” in the economy, and expressed grave concern over the human rights situation in Tibet and Xinjiang.

Chinese foreign ministry spokesperson Zhao Lijian hit back at the G7 during a regular media briefing on Wednesday in Beijing, saying the bloc “is obsessed with creating division and confrontation”. G7 nations have a “have a poor human rights track record”, Zhao said, adding that they “have no sense of responsibility or morality”.

In a section that summed up the summit’s sense of grasping for solutions, the G7 issued a call to China to press Russia to “stop its military aggression”. But as leaders well know, that is something Beijing has been reluctant to do.

All those strands will come together at the Group of 20 (G20) summit in Bali later this year, a forum where Putin and Chinese President Xi Jinping would normally be expected to be present. Scholz, outlining perhaps the summit’s most tangible outcome, said G7 leaders had agreed to attend, too, “if all things go as normal”.

“There was broad agreement here in all our discussions that we don’t want to drive the G20 apart,” Scholz said.

The issue of climate change, energy and the Trips waiver also addressed at the G7 summit
National
1 month ago