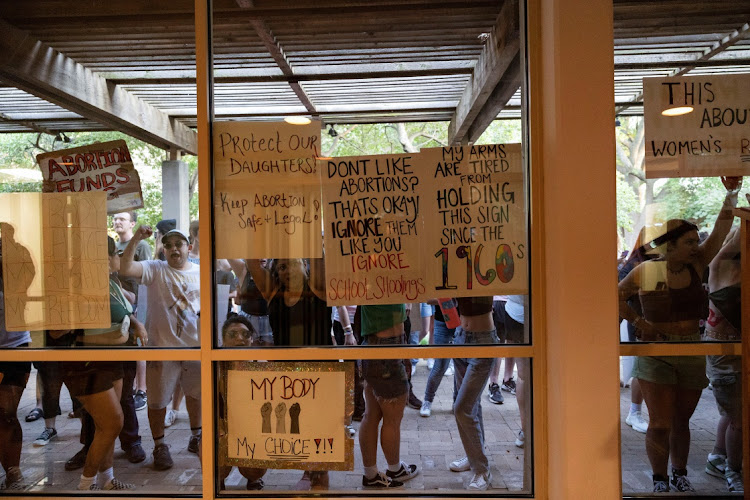 Abortion rights demonstrators hold up signs and drum against the the windows of Denton City Hall as Denton’s city council meets to vote on a resolution seeking to make enforcing Texas’ trigger law on abortion a low priority for its police force, in Denton Texas on June 28 2022. Picture: REUTERS/SHELBY TAUBER

In recent days, Boston IVF, one of the US’s biggest fertility networks, has fielded calls from worried patients in abortion-ban states who are inquiring about moving their frozen embryos to a “safer” place.

Legal experts say the ruling doesn’t pose an immediate threat to in vitro fertilisation, the nearly half-century-old technology that helps make possible about 2% of US births.

Still, it opens the door to state-level laws that could crimp IVF procedures since the method typically involves generating — and often destroying — embryos that are not used.

Among “people who take seriously the idea that life begins at the point of fertilisation, it is logical for them to say that embryo destruction is a problem”, said I Glenn Cohen, a Harvard Law School professor who specialises in bioethics.

The main concern is not that state legislators will target IVF, he said, but that “the language they adopt to prohibit abortion may inadvertently create questions about the status of embryos”.

At issue are hundreds of thousands of frozen embryos left over from past IVF cycles, and more from cycles to come. Typically, would-be parents fertilise multiple eggs, then implant only one embryo. Choosing from among multiple embryos can improve the odds of a successful pregnancy and a healthy baby. It can also result in discarding or storing some embryos for each cycle of in vitro fertilisation.

The court ruling means new uncertainty that is causing “a lot of angst in our community, both from professionals and from patients”, said Sean Tipton, spokesperson for the American Society for Reproductive Medicine, which held a virtual town hall for members on the decision on Monday night.

Members and their patients are seeking clarification on the legal status of eggs fertilised using IVF, said Tipton, but definitive answers are probably months away at best as new laws move through state legislatures.

Cohen, who co-authored an analysis in the Journal of the American Medical Association about the ruling’s implications for fertility treatments, concurred that the decision’s possible effects aren’t yet a crisis, but stresses they need to be considered and discussed.

Fertility giant Inception, which has clinics around the country, is telling patients there’s no immediate cause for concern. “This ruling does not limit our ability to provide high-quality IVF services as we always have, and none of the ‘trigger laws’ taking effect in the states where we operate will do so either,” CEO TJ Farnsworth said. He didn’t address the potential issue of embryo destruction.

But what if, some worry, a legislature blocks IVF unintentionally? What if it defines life as beginning at conception, and that means no embryos can ever be discarded?

Anti-abortion activists “are not in the mood to compromise. They are looking to slam that door shut as hard as they can,” said Tipton. “If infertility patients get their fingers stuck in that door, that’s perfectly OK with them.”

Some anti-abortion activists could even specifically target IVF, said Barbara Collura, CEO of Resolve: The National Infertility Association. “They don’t have the guardrails of Roe v Wade any more,” she said.

Resolve will be analysing state-level bills and is asking members to be prepared to share their own infertility stories with legislators. “A lot of people have built their families through IVF, but nobody knows it,” Collura said.

Boston IVF is developing a programme to help patients who want to transfer embryos to Massachusetts, said Stern. But for now the status quo is likely to prevail for patients.

“If they were doing IVF last week, they should continue to do IVF,” Collura said. “There isn’t any state that has said, ‘We’re stopping IVF.’”

LETTER: US women live in a place that sees their bodies as a political playfield for men

BIG READ: The US Supreme Court decision on abortion is not about the right to life

The deliberately polarised debate is not about human rights at all: it is about politics, state power and control, writes Kristina Bentley
Life
1 month ago
Next Article