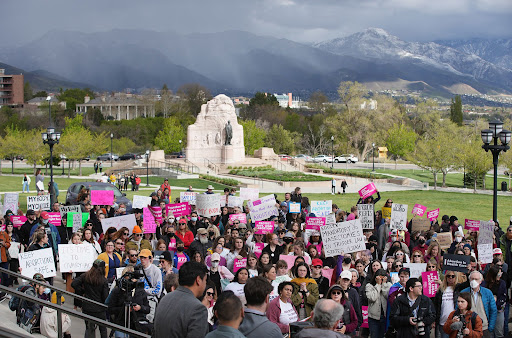 The Planned Parenthood Association of Utah has filed a lawsuit seeking to block Utah’s new law banning all elective abortions that went into effect late on Friday.

The group said it also plans to ask the court for a preliminary as well as permanent court order against the state’s new law banning abortion at any point in pregnancy, according to the suit filed on Saturday in Salt Lake City.

Utah’s trigger ban, passed by the state’s legislature in 2020, took effect late on Friday after the Supreme Court overturned Roe v Wade, forcing the Planned Parenthood Association of Utah to immediately cease performing abortions, according to the complaint.

“The US Supreme Court eliminated a federal constitutional right,” said Karrie Galloway, president and CEO of the Planned Parenthood Association of Utah. “In one terrible moment, Roe v Wade was overturned, and Utahns’ power to control their own bodies, lives and personal medical decisions was threatened.”

Doctors in Utah who violate the state’s trigger ban now face a second-degree felony charge and prison terms of between one and 15 years as well as criminal fines and loss of their professional licence, the group says.

The plaintiffs allege that the abortion ban violates the Utah constitution and if emergency relief isn’t granted at least 55 Utahans won’t be able to get the abortion care they need in the state this week.

About 2,800 Utahns each year face carrying a pregnancy to term against their will or remaining pregnant until they can afford to travel out of state to get an abortion or attempting to self-manage their abortions out of the medical system, according to Planned Parenthood.

The plaintiffs argue the state’s constitution protects pregnant Utahns’ rights to determine when and whether to have a family and determine what happens with their own bodies and lives.

Finding a list of legal abortion facilities is difficult, but it’s easy to find dodgy services: online, on street poles and in classifieds
News & Fox
2 months ago

Americans kill little Americans, while the rest of the US carries on as if guns are not to blame
News & Fox
2 months ago
Next Article