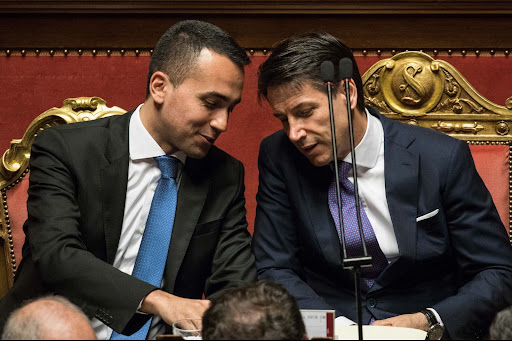 The largest party in Italian Prime Minister Mario Draghi’s governing coalition split on Tuesday after Foreign Minister Luigi Di Maio quit the group because of its refusal to back military support for Ukraine.

Di Maio said he was leaving the Five Star Movement, which he led, lead, and would start a new parliamentary group. The decision came after days of talks with former Prime Minister Giuseppe Conte, the current Five Star leader.

The move is the biggest political shake-up in Draghi’s government since he became premier last year, though it doesn’t threaten his majority in both houses of parliament, where his coalition has a comfortable majority. Conte has indicated he intends to continue to support the government.

Matteo Salvini’s League will become the largest party in the coalition, giving him a stronger voice on his core policy platforms, including blocking tax increases and pushing for more state aid.

Conte is opposed to sending weapons to Ukraine, conflicting with the government’s stance. Draghi has been one of the most outspoken backers for the country and travelled to Kyiv earlier this month to voice support for Ukraine’s bid to join the EU.

Five Star “had the duty to support the government without ambiguity,” Di Maio said. “At this historical juncture, supporting European and Atlanticist values cannot be considered a fault.”

The debate has divided public opinion in Italy and Draghi’s wide coalition government. The rift widened this week ahead of a closely watched parliamentary debate on the country’s position on the war.

Di Maio now plans to set up a separate parliamentary group. At least 60 of 227 Five Star lawmakers are set to join him, according to news agency Ansa. Conte instead is considering leaving Draghi’s coalition and offering ad hoc support only, according to people familiar with the matter. Five Star said in a statement they had no plan to quit the government.

Five Star secured the most votes in Italy’s 2018 elections but has since fallen sharply in polls. While Draghi on Tuesday vowed to continue providing aid and defended the EU’s sanctions, 57-year-old Conte has called on the government to focus on reviving peace talks and halt weapons deliveries.

The poor performance of the party under Conte’s leadership has been worsening internal tensions. With his stance on the war in Ukraine, Conte has harmed Italy’s international image “without even succeeding” in shoring up the party’s electoral fortunes, Di Maio said.