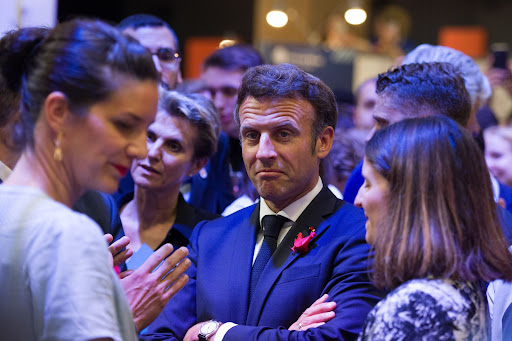 President Emmanuel Macron made history in the French legislative elections on Sunday, just not in the way he hoped.

After his re-election in April, most observers expected Macron to get an outright majority in parliament, as presidents have for decades. Instead, Macron failed to reach the 289-seat threshold, even if his alliance remains the largest bloc.

That means that while Macron may be able to keep control of the executive branch, he will have a hard time passing legislation, putting much of his agenda in peril — including plans to increase the retirement age and deliver tax reforms.

“This situation is a risk for our country given the challenges we are facing both nationally and internationally,” Prime Minister Elisabeth Borne said. “The right compromises must be built to act for France.”

Macron’s group won 245 seats. The second-largest group in parliament is Nupes, a leftist coalition led by Jean-Luc Melenchon, which gets 131 lawmakers. The far-right National Rally fared much better than expected with 89 seats, while the centre-right Republicans and their allies took 61.

The president’s cabinet will also be shuffled. Three ministers failed to be elected and officials in Macron’s office have previously said anyone in that position would have to relinquish their jobs. Ecology minister Amelie de Montchalin said on Sunday night that she will leave the government.

France’s current political system, known as the Fifth Republic, was set up by Charles de Gaulle in 1958 to avoid the disruptions from a parliamentary system that couldn’t create a stable majority. Socialist Michel Rocard, for instance, headed a government in the late 1980s that fell short of an outright majority, though his party and its allies were far closer to that than any group of parties is projected to be after Sunday’s election.

Macron’s support base has shrunk after the past five years, with protests against his pension reform, social inequality and handling of the Covid-19 pandemic. His second term was already off to a rocky start, with allegations of sexual harassment against one of his ministers and criticism of the government’s policing doctrine after chaos at a football stadium sparked anger in the UK.

Lisa Thomas-Darbois, a specialist in French politics at the Paris-based Institut Montaigne, said Macron won’t be able to lean on the extremes, whether it’s the far right or the far left, which will oppose systematically every proposition from the government.

But he could cobble together alliances on specific topics — his position on raising the retirement age is similar to that of the centre-right Republicans, for example.

“The good thing is there are areas where they could agree, from the environment to public services to the need to engage citizens better,” said Annabelle Lever, a professor at Sciences Po, describing different ad-hoc configurations of the parties in the coming parliament. “The bad thing is they might just not want to agree.”

If that doesn’t work, Macron might be tempted to use article 49.3 of the French constitution, which under certain conditions allows him to put a law in place even without approval from parliament. Rocard set the record, by far, for resorting to this system.

While Nupes is unlikely to implement its economic programme, which includes higher wages and cutting work hours on the back of massive public spending, the coalition will gain influence on parliamentary and public debates. Amid climbing interest rates worldwide, it has “the potential to undermine investor confidence in the French fiscal outlook”, according to Bloomberg Intelligence analyst Maeva Cousin.

The National Rally, meanwhile, which won a record result, has enough seats to be able influence committees and get a designated amount of floor time to air its views, an important step in the decade-long effort by Marine Le Pen to bring the party to the centre of French politics.

Le Pen, who lost to Macron in April’s presidential ballot, immediately tried to position her party in opposition both to the president and to Melenchon and the far left: “We will be a firm opposition, without connivance, but responsible and respectful of institutions,” she said in a brief speech on Sunday.

Jean Garrigues, a historian who writes about French politics, said the results could be a blessing in disguise for Macron. “It could force the president to negotiate,” he said, “eroding the image of a self-centred ruling style that’s been sticking to him since 2017.”