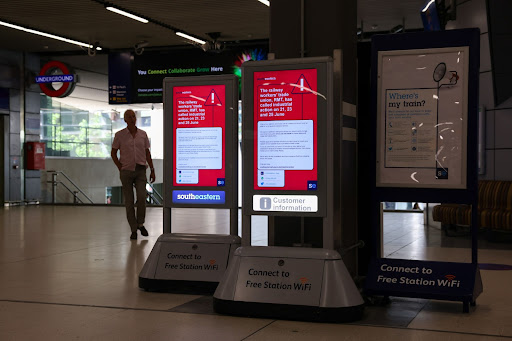 Britain’s biggest train strike in 30 years is set to upend travel on Tuesday as the world’s oldest railroad struggles to redefine its role in a commuting landscape transformed by the coronavirus crisis.

The planned walkouts by 40,000 staff at 13 train operating companies and track manager Network Rail are aimed at securing job guarantees and pay hikes against a backdrop of spiralling inflation, union leaders said.

The strike leaders confirmed on Saturday that talks with Network Rail, train operators and London Underground had failed and the strike would go ahead for the planned three days. The main transport union said in an online statement that despite negotiations, which lasted several weeks, “no viable settlements to the disputes have been created”.

Only about 20% of services will survive an initial three days of stoppages, with Scotland and Wales hit hardest. Tuesday will also see action by 10,000 London Underground workers in a separate dispute about jobs and pensions. The upheaval on the tracks follows weeks of turmoil at airports and airlines as staff shortages trigger hundreds of flight cancellations and hours-long delays.

Yet as disruptive as the rail walkouts are likely to be, they’re symptomatic of more fundamental challenges facing the industry as the rise of home working weighs on demand long after the lifting of pandemic lockdowns. The shift in travel habits coincides with a wholesale makeover of the railway as the government seeks to simplify fares while scrapping Network Rail and a long-standing franchise system to reduce fragmentation of the network.

Figures released by the Office of Road and Rail on Thursday reveal the extent of rail’s retreat, with total journeys at 62% of the pre-pandemic tally in the quarter to March. Most tellingly, season tickets — the cheapest travel option for daily peak-time commuters — accounted for just 17% of rail journeys about 12 months, less than half the former level.

“The industry is in crisis,” says Tony Lodge, author of Changing Track, a report published last month by the Centre for Policy Studies think-tank and subtitled “How to rescue the railways after the pandemic”.

Lodge argues that the sector is facing its third big reset since World War 2, after the swingeing cuts of the 1960s, implemented in response to the rise of cars and trucks, and privatisation in the 1990s, which lifted investment and saw passenger numbers revive as roads grew congested.

“The pandemic has poleaxed the railway, particularly in London, where the great daily home counties commute into Liverpool Street, Waterloo and Victoria looks like it could be gone forever,” he says. “We’re at a crossroads and there needs to be some radical thinking to respond to evolving passenger demands.”

While a headache for the government, the slump in ridership is less of an issue for Britain’s train operating companies. With the risk and reward-based franchising system already set to be scrapped before Covid-19 hit, the pandemic prompted a switch to emergency measures, which will be replaced by a new service-contract model. Firms will receive payments to run trains rather than relying partly on less predictable income from passenger fares.

The certainty offered by the change has brought a spate of takeover bids for players in public transport.

FirstGroup executive chair David Martin, a rail veteran, said in an interview that firms understand they must cut their cloth to new realities. Though future requirements are unclear, they could include steps to stimulate demand, as well as deliver on plans to eliminate diesel trains.

UK transport secretary Grant Shapps said that having received an extra £16bn in state support to see it through the pandemic without a single employee being fired or furloughed, the railway “needs a new direction”, with current subsidies unsustainable.

The Rail, Maritime and Transport Workers union, which called the strike, has suggested that Network Rail alone plans to cut as many as 2,500 jobs as it seeks to save £2bn, and that train operating companies are freezing pay and seeking changes to contracts.

Rail investment remains a central plank of Prime Minister Boris Johnson’s policy of “levelling up” between UK regions as he seeks to retain former Labour heartlands that voted Conservative at the 2019 election.

Though plans for high-speed links have been scaled back, the government is committed to a £96bn overhaul. Lodge says there’s probably still a need for the 360km/h HS2 line from London to Manchester if to free up other lines to take freight off the roads and slash carbon emissions.

Results from last year’s once-a-decade UK census, due later this month, should reveal more about the changes in rail travel, helping to inform future policy, the UK Data Service has said.

Reforms to be introduced next year with the creation of Great British Railways, designed to bring the network under a single state authority while modernising fares and ticketing to better accommodate hybrid working, may already be obsolete given the pace of change, Lodge warns. He says more sweeping steps such as an end to peak travel periods and automatic charging when people board trains should be explored.

Shapps appealed to staff not to strike, saying they may protest themselves out of a job. Commuters who three years ago had little choice but to take the train now have other options, like Zoom meetings. “Wave them goodbye, and it will endanger the jobs of thousands of rail workers,” he said.

Lodge concurs that rather than furthering their campaign for job security and improved pay, unions risk further weakening rail’s appeal. That casts doubt on the future of a network that originated in 1825 with the world’s first public steam railway between Stockton and Darlington in northeast England.

“The risk is that after a summer of disruption commuters decide that they’ve had enough,” he said. “Most people seem to prefer working from home and companies can avoid city rents and funding half of a season ticket for their employees. It’s a dangerous game to play.”