Bullishness over the so-called Korean wave is fading fast, with stocks tumbling 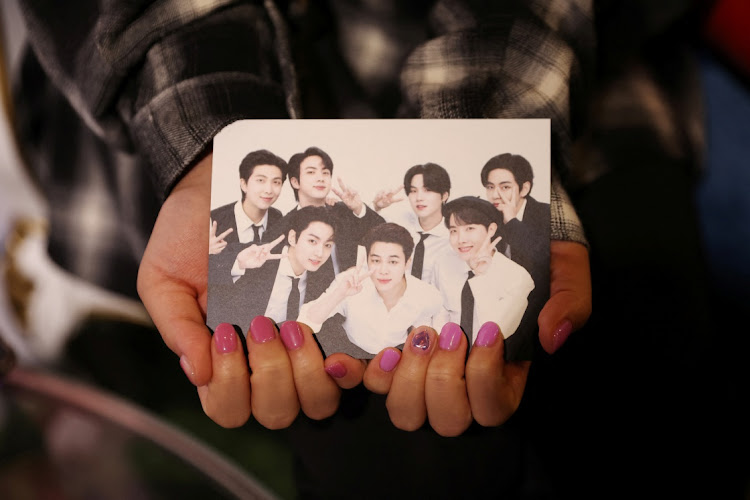 South Korean dramas and pop songs have never been more popular globally. In the stock market though, bullishness over the so-called Korean wave is fading fast.

Superstar pop band BTS’s announcement of a hiatus is the latest bad news to hit the nation’s entertainment sector, causing a 25% plunge in the shares of its managing agency, Hybe Co, on Wednesday.

An equal-weighted basket of stocks of Korean drama producers and pop music agencies has slumped 39% in 2022, outpacing the 18% drop in the benchmark kospi. The 22 firms in the cohort have lost $12.7bn in market value in 2022, with Hybe accounting for more than half the decline, according to Bloomberg calculations. That’s after the basket jumped about 60% in 2021.

Korean entertainment firms have also been hurt by the postpandemic slump in online streaming services including Netflix that carry their content, and by broader concern about rising interest rates. And some analysts say the shares just got too expensive amid the boom. Hybe, for example, traded at more than 56 times its next 12-month earnings in November. It’s at about 25 now. 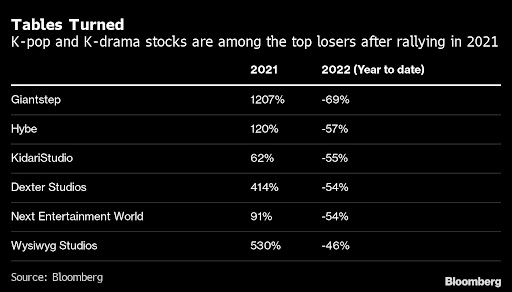 “They are a special kind of growth stocks,” said Lee Kyoung-Min, an analyst at Daishin Securities. “Their volatility could be huge on specific events, such as the comeback or the suspension of a certain music group’s activities.”

The Korean-wave stock boom was fuelled by a series of mega-hits that captivated audiences worldwide. Parasite became the first non-English film to win the Academy Award for Best Picture in 2020, while a year later Squid Game turned into Netflix’s biggest series launch yet. BTS manager Hybe went public and the group itself topped Billboard’s charts. Delighting many kids but not necessarily their parents, Baby Shark (Doo Doo Doo Doo Doo Doo) was viewed more than 10-billion times on YouTube.

But as the BTS-triggered slump suggests, sometimes entertainment companies can be overly reliant on one act. The band’s announcement that its members will pursue individual projects wiped out about $1.7bn in Hybe’s market value in a day. Meantime, Giantstep, which makes K-Pop avatars and works with Hybe, saw its stock skyrocket more than 1,000% in 2021 but it’s given up almost all of those gains.

Netflix’s outlook is also a concern, after it lost subscribers for the first time in a decade. That’s troubling for drama production firms that were expected to benefit from increased competition among the likes of Netflix and Apple. Still, the US streaming giant is likely to keep spending on Korean content as Asia is its only growth region.

For some investors, though, the sector’s slump means there are buying opportunities.

“Market reactions have been a bit too excessive,” said An Hyungjin, CEO at Billionfold Asset Management, referring to Hybe’s plunge on Wednesday. “It also has groups like Seventeen that are on their way to becoming like BTS.”

In the end, the easiest way for the entertainment shares to rebound may be for the companies to do their job: create content that audiences are willing to pay for. Stocks related to Squid Game are on investors’ radar screens as they await the second season of the survival drama series.

“There are always expectations for new movies or dramas that could send those stocks higher again once they hit bottom,” said Lee Jinwoo, chief strategist at Meritz Securities.